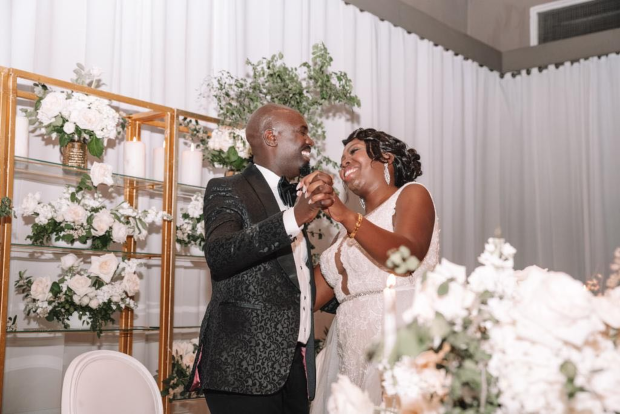 At an intimate affair, Nonhlanhla Soldaat and Hector Mkansi finally had their fairytale wedding planned by renowned wedding and event specialist, Precious the Planner.

The event was set against the backdrop of the lush gardens of the Thaba Eco Hotel in the south of Joburg.

READ MORE: #KFCWedding: On their special day, heartfelt messages of love and well-wishes pour in for Nonhlanhla and Hector

The couple and guests were serenaded by Dr Tumi, Amanda Black, Jaziel Brothers, who are one of the grooms all-time favourite musicians, the legendary Mafikizolo, DJ Bafana and Thando Thabethe.

Nonhlanhla wore a custom-made Bride & Co. dress, and Hector was dashing in a black suit paired with a tie by Relevance for Men, pledged by DJ Black Coffee.

Gushing over the stunning bride and handsome groom, Nhlanhla Nciza took to Instagram to congratulate the newly weds and shared a video of herself and Theo performing as Mafikizolo at the wedding reception.

What an absolutely fantastic time we had performing for Hector and his beautiful bride Nonhlanhla at their beautiful wedding. Congratulations ???? Full video on @mafikizolo_africa #KFCWedding #kfcproposal #LoveWinsAlways

Donald kept his promise and performed for the newly weds. He sang Maxwell's This Woman's Work, which is the same song that the bride walked down the aisle to.

Taking to Twitter, Dr Tumi, announced that his promise to minister at the wedding has been kept.

Joining the wedding, was South Africa's most loved soulful brothers, the Jaziel Brothers.

And how could we forget Precious, the Planner who also took to Twitter to express her gratitude to have been a part of the wedding.

One of Nonhlanhla and Hector’s dreams has always been to travel beyond the borders of South Africa.

And as pledged by KFC, the couple kicks off the new decade with an all-expenses paid honeymoon in New York.

Other pledgers and contributors to the wedding and couple include:

Would you like to send a message to Nonhlanhla and Hector? Please share it with us here.

We live in a world where facts and fiction get blurred
In times of uncertainty you need journalism you can trust. For 14 free days, you can have access to a world of in-depth analyses, investigative journalism, top opinions and a range of features. Journalism strengthens democracy. Invest in the future today. Thereafter you will be billed R75 per month. You can cancel anytime and if you cancel within 14 days you won't be billed.
Subscribe to News24
Related Links
WATCH: #KFCProposal - Nonhlanhla and Hector go on their first outing since becoming social media...
'I had taken our rings to be cleaned and decided to do something romantic' – KFC couple on plans...
A Twitter love story: He sent her a DM, she responded, they fell in love and former DA leader...
Next on Life
30-year-old bride's dream to marry comes true in hospital hours before she passes on from cancer