Just a few months ago, South Africa was taken by surprise when Hector Mkansi proposed to his wife, Nonhlanhla Soldaat at a KFC in the south of Joburg.

The couple became known as the national couple after numerous pledges poured in to help them have the wedding of their dreams — which they did at the beginning of this year.

So, it's safe to say food — fast food in particular — may be the way to a man's heart after all.

Another couple who know all about fast food and love is Sharon Arteaga and Dylan Welch of Corpus Christi, Texas. They celebrated their wedding at a fast-food restaurant called Whataburger in their hometown. All images by Cover Images/MAGAZINEFEATURES.CO.ZA

This burger-loving couple were the grand prize winners of a competition run by the fast-food chain.

The prize? An all expenses-paid ‘Whatawedding’!

Artega and Welch had been together for five years after meeting on a night out during their university years.

It was during the early days of their relationship that the couple discovered their mutual love for ‘Whataburger’.

READ MORE: Looking forward to your big day? Here's how to plan a memorable wedding according to events experts So, when the fast-food chain ran a competition for six couples to be wed at their local restaurant, they didn’t hesitate. Winners of the grand prize were married at their local Whataburger, the chain's flagship bayside location, totally free of charge. 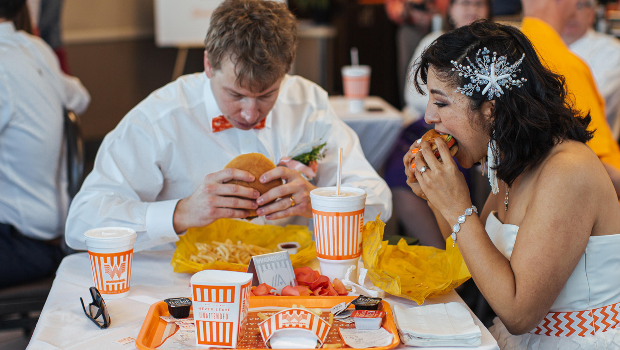 The big day featured a few unique surprises like a decked-out Whataburger-themed Ford Shelby Cobra for the getaway car, an onion ring bearer, and free Whataburger meals during the orange-and-white-themed reception. Would you have a wedding at your favourite takeaway outlet? Tell us here.

We live in a world where facts and fiction get blurred
In times of uncertainty you need journalism you can trust. For 14 free days, you can have access to a world of in-depth analyses, investigative journalism, top opinions and a range of features. Journalism strengthens democracy. Invest in the future today. Thereafter you will be billed R75 per month. You can cancel anytime and if you cancel within 14 days you won't be billed.
Subscribe to News24
Related Links
Cape Town bride and British groom who met at a group wedding tie the knot at a mass wedding
Childhood sweethearts who first kissed at 5 years old rekindle their love after 36 years apart...
Bride considers dropping plus-size friend from bridal party because bridesmaid dresses don't come...
Next on W24
Paris Hilton says attending Britney Spears’ wedding was the most iconic night of her life