WATCH: Upset bride runs from the altar after groom's ex girlfriend crashes their wedding in a white dress

Your wedding day is supposed to be one of the most memorable days of your life.

However, the day itself can be fraught with potential disasters: What if there's a problem with the venue? Or a problem with catering. Or even worse, an unwelcome guest shows up uninvited?

A video showing a distraught woman crashing her ex boyfriend’s wedding and begging him to take her back has gone viral in China, reports Daily Mail.

The ex girlfriend reportedly burst into the ceremony at the point where the bride and groom were about to share their first kiss as husband and wife.

The man appears to be caught by surprise seeing his ex lover wearing an embellished white dress with a veil. He had allegedly dumped her over personality differences.

In the video, she can be seen clinging to the newly-married man, and dangling from his left arm sobbing.

According to Mirror Online, she cried saying: “It was my fault,” falling to the floor and kneeling in front of him, pleading for a second chance.

The groom is seen holding the bride's hand instead, trying to calm and reassure her, because this is honestly the stuff of nightmares.

At first the bride watches in disbelief, but eventually she quite understandably decides she has had enough and storms off, looking visibly upset.

The bridegroom chases after his new wife and the rejected woman is left on the stage weeping with her face in her hands. 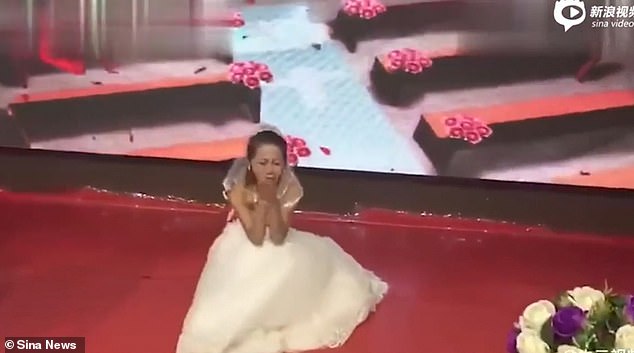 According to Daily Mail, a stunned master of ceremonies was heard saying: “We have an unexpected situation here," before adding "perhaps this is the reality of love."

In an attempt to restore order to the wedding, he then quoted a Chinese proverb: “If you ask life what love is, it is to devote your life to someone else.” Awkward.

The video was reportedly uploaded by an entertainment blogger before being widely shared by Chinese media outlets like Sina.

Twitter users had a lot to say, some of them asking why the bridesmaids and groomsmen did not prevent the disaster, saving the couple the public embarrassment.

The best man slacking in his duties. My homie shoulda tackled her at the door.

Where’s my maid of honor???

This is definitely a classical, "what would you do" moment?

We live in a world where facts and fiction get blurred
In times of uncertainty you need journalism you can trust. For only R75 per month, you have access to a world of in-depth analyses, investigative journalism, top opinions and a range of features. Journalism strengthens democracy. Invest in the future today.
Subscribe to News24
Next on W24
Guests share why they think when it comes to weddings, less is more