Nicole Arnett was so tired of waiting to get married that she organised her wedding in secret – before surprising her fiancé with an impromptu ceremony at a beach party.

The 40-year-old realtor from British Columbia, Canada, got engaged to 39-year-old business owner, Daniel, in 2014 after a low-key and intimate proposal at their home. Daniel gifted Nicole with his with grandmother’s wedding ring.

Since they agreed to tie the knot, Nicole and Daniel had trouble deciding exactly how they wanted to execute their big day. After several unsuccessful attempts to secure the details, Nicole came up with an idea to surprise Daniel with a wedding ceremony. Nicole holding a board. Image by Media Drumworld/ Magazine Features…

Nicole’s plan was to disguise their ceremony as the typical New Year’s Day party she and Daniel hosted every year, which was closely followed by Nicole’s 40th birthday on January 2 this year.

“We talked about so many different ideas, and for one reason or another, it never felt quite right when we got down to confirming it, or something happened, and we pivoted away from the idea,” says Nicole explaining why their wedding was delayed how she came up with her plan.

“I was out for a run with a girlfriend, and I said, ‘I think I’m going to surprise Daniel and get us married because it means a lot to us, and we just keep stalling on it, and he knows I like to take the reins on things.’" 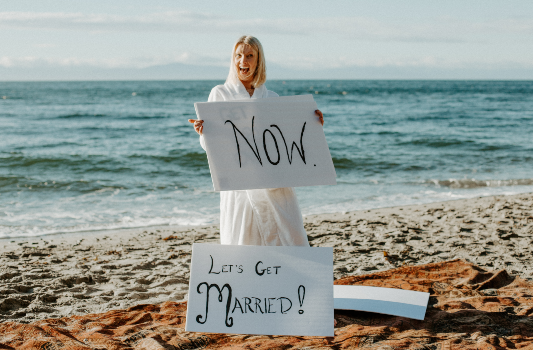 Nicole holding a board. Image by Media Drumworld/ Magazine Features.

“I thought it would be a nice surprise and really special, and my girlfriend, who knows him very well, completely agreed and thought it was a great idea. We always host a New Year’s Day party, we do the ‘polar bear swim’, It’s my favourite day of the year."

Thanks to the help from friends and family who would be attending the party, Nicole was able to arrange the ceremony within two weeks and for less  than $3 000 (about R40 000) - all without giving anything away to the unsuspecting groom. READ MORE: Bride who was told she had a 3% chance of walking again after car accident defies doctors to walk down the aisle

“I never for a second worried that Daniel wouldn’t love this or be up for it,” says Nicole. “I booked our wedding commissioner, which was necessary, booked a caterer and told Daniel, ‘I don’t want to be the one cooking today. It’s my 40th birthday the next day, so I’m just going to do this,’ and I just blamed anything out of the ordinary on that. I already had the dress from a friend’s wedding.”

On New Year’s Day 2020, with 35 guests gathered on Bonnie Brook beach, Nicole finally revealed to Daniel that their party had a hidden motive behind it. Nicole and Daniel. Image by mediadrumworld.

“I got up and said how happy I was that everyone was there and then I was mentioning that I had a long to-do list this year for resolutions and goals etc. and there was something that Daniel and I had been meaning to do for a long time, but we’d never got around to, which was get married,” says Nicole.

Daniel had been filming Nicole during her speech and dropped his phone when he realised what would follow next, but he was all for it.

“After the ceremony, the entire party serenaded us with the Beatles ‘When I'm 64,’ and then we jumped into the ocean," Nicole says.

“Daniel said it couldn’t have been more perfect or more us, which I agree with, and he said he couldn’t have ever planned a better event or dreamt of anything more fun. I think the honeymoon will be a collaborative effort — we’ll plan it together this time.”

Would you ever surprise your partner with a wedding? Share your thoughts with us here.

We live in a world where facts and fiction get blurred
In times of uncertainty you need journalism you can trust. For 14 free days, you can have access to a world of in-depth analyses, investigative journalism, top opinions and a range of features. Journalism strengthens democracy. Invest in the future today. Thereafter you will be billed R75 per month. You can cancel anytime and if you cancel within 14 days you won't be billed.
Subscribe to News24
Related Links
Mother-in-law gifts bride her lingerie from her own wedding night in the hopes that it will make...
This phone case has a ring in it because it doubles as a ring-box and films marriage proposals
Failed marriage proposal: 'I guess you wanna get married now?’ – Why these 6 women didn't marry...
Next on Life
30-year-old bride's dream to marry comes true in hospital hours before she passes on from cancer