A Vogue review on Giambattista Valli's Fall 2017 haute couture collection aptly described his work as a visual representation of a designer who "makes things for the world his women live in."

And "his women" include the likes of Rihanna, Amal Clooney, Giovanna Battaglia, Jennifer Lopez, Lupita Nyong'o and Olivia Munn. Quite a powerful arsenal of A-listers to have under your intricately embellished belt, I must say.

While Amal Clooney often opts for Atelier Versace on the red carpet she does love a lot of Valli for her other appearances. This was her post-wedding ceremony frock in Venice in 2014. 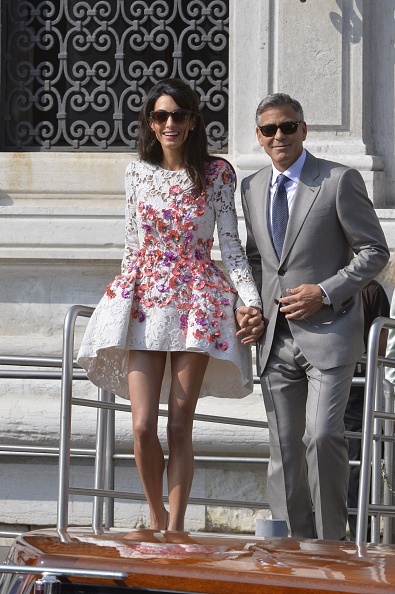 Another bride who slipped into a Giambattista Valli creation on her wedding day was Vogue Japan's senior fashion editor, Giovanna Battaglia Engelbert. The fashion mogul had four wedding gowns and this was one of them...

See our other favourites:

At the 57th Annual Grammy Awards And when she owned her Valerian and the City of a Thousand Planets Premier week in Valli... Read more: Everyone's talking about Rihanna's red dress - here it is from every angle

Cannes jy of Cannes jy nie?! Because we literally Cannes't even - this dress was everything! Another Golden Globes red carpet winner. Some would say a slit, a train, and a cape all on one dress is a bit much, but this somehow works. Vanity Fair Oscars after party - not exactly a party dress, but who cares when your flex is a Giambattista Valli gown? The Girls star's quirky personality is never misplaced even on the red carpet.