ICYMI: all the red carpet showstoppers from this weekend’s Grammys and Baftas The 61st Annual Grammy Awards took place last night (3am for us), "celebrating, honouring, and sustaining music's past, present, and future."

The Grammys are not only a musical extravaganza, where we see our favourite artists outperform their previous stellar musical offerings, but it's also one of the most sartorially fascinating and diverse red carpets - from semi-formal looks to haute couture gowns straight off the runway. One actually wonders what the official dress code actually is, but we're wowed every year nonetheless.

READ MORE: Grammys 2018 behind the scenes: Celebs getting ready

This year, it would appear that celebrity stylists collaborated with designers to exhibit avant garde, futuristic, 3D gowns and accessories - a common trend spotted at Paris Haute Couture Fashion Week a few weeks ago.

Classic, traditional silhouettes have not been tossed out the limo window, though, and a few A-listers still looked remarkable in their chosen dresses. What is interesting, however, is that the stars who usually embrace the classics, tried their hand (and hips) at more breathable fits and opted for the offbeat glam we love from the runway.

One such example is Kylie Jenner's Grammys debut look. This reality TV star and beauty mogul is known for her "feline" style that is all about accentuating her favourite features and is easy to emulate, but at the Grammys she surprised us in a custom pink Balmain (a family fave) jumpsuit.

The fit could have been slightly more tailored, otherwise we'd love to see the 21-year-old in more high fashion looks that are as intricately designed as this jumpsuit. Janelle Monáe - a musician who has dedicated her entire discography and style to futuristic funk and Afrofuturism, gave us shapes, pleats, architecture, gold safety pins and decolletage. There's clearly nothing dirty about this computer because we love this look. Icons of now, J-Lo and Lady Gaga, united in silver and white respectively. Plus, the hat that tur.. I mean, bumped heads. Another halo effect hat, styled in a semi-formal meets festival-ready look, was seen on Yuna - a star whose tracks always manage to put us in our feels. And the woman of the moment, Belcalis Marlenis Almánzar (Cardi B), who recently graced the cover of Harper's Bazaar like we've never seen before, showed up and showed off in Thierry Mugler. If this is not the next Thierry Mugler fragrance bottle design, they're all wasting our time. Red carpet-sweeping gowns will never not get us talking. Jada Pinkett-Smith and songstress Ella Mai got it just right with their over-the-shoulder pose that somehow always tends to make such gowns slightly more dramatic than they already are. Neon, bold and bright - Tracee Ellis Ross (T.E.R) and singer H.E.R sported this trends in different variations of the suit. Tracee in a classic Ralph & Rousso couture suit and H.E.R in an edgy sports luxe "suit." 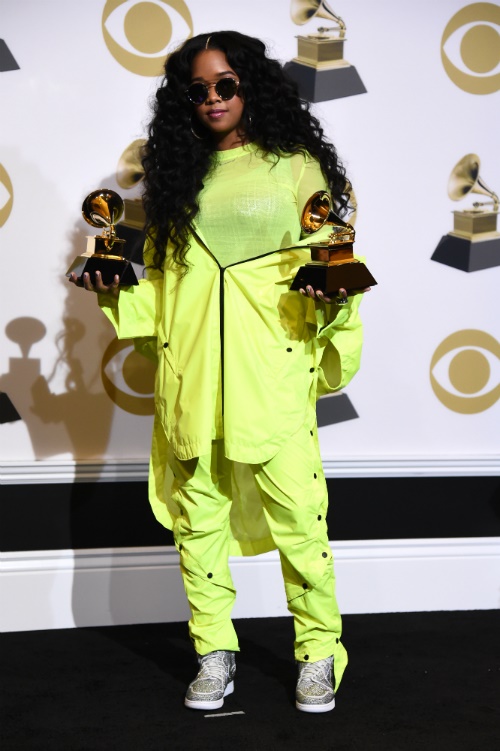 Fantasia hit a very high style note with this ying yang body-hugging gown. On any other occasion tulle on your shoulder and ruffles on the tail of the dress might have been a bit much, but this works. Well done to her stylist Daniel Hawkins. Dominant colours and trends seen on this red carpet last night were black, white, pink, silk, and bow details. We think the standard has officially been set for the upcoming much-anticipated Oscars.

These were the top looks that any fashion jury would highly approve of and give a hearty applause to:

Rules Don't Apply actress Lily Collins, walked her first Baftas red carpet in an ink Givenchy couture sheer dress and blazer combo. Her beauty look is immaculate, but we do wish she had not popped that collar. Otherwise, flawless!

In Bafta blue on the red carpet tonight. What an immense honor to wear @givenchyofficial haute couture to my first @bafta awards. A night I’ll treasure forever...

Her talent and style continues to snatch our wigs the same way she did her's on the first season of How To Get Away With Murder. British/Bollywood stunner Amy Jackson won this red carpet. And the dress has pockets!

This trailblazing Black Panther actress went for the "simplicity is key" decree in a white suit and touches of silver. We're fangirling that cropped hairdo she's been sporting. Another BP star, Danai Gurira, breathed life into the awards ceremony in this black corseted gown. We can't wait to see how her Oscars look will top this one. British star Zawe Ashton pretty in pink in a ROKSANDA 'Elise' dress, their 'Eartha' bag thoughtfully accessorised with a #TimesUp ribbon and she completed the look with black pumps.

Beauty @zawe wears the ROKSANDA #EliseDress last night at the #BAFTAS in London. She carries the #EarthaBag which adorns her #TimesUp ribbon. Thank you @stephwilsonstylist ??

Soon to be one of the biggest household names in film, Roma actress Yalitza is making sure that her red carpet looks are nothing short of incredible. Shout out to Salma's glam squad for curating this spectacular Gucci look. And the final touch of magic? A royal couple, of course. Kate Middleton's white asymmetrical gown drew our attention to her glowing face and drop earrings that once belonged to Princess Diana.

This evening The Duke and Duchess of Cambridge attended the @BAFTA Awards at the Royal Albert Hall. The Duke, BAFTA President, presented the Fellowship to Thelma Schoonmaker at the Awards Ceremony. Swipe to see The Duke and Duchess congratulating some of tonight’s #BAFTA Award winners, including Rising Star Award winner @letitiawright and @officialspikelee, Director of BlacKkKlansman, winner of Best Adapted Screenplay. Congratulations to all of tonight’s #EEBAFTAs Award Winners! ?? PA / ?? Kensington Palace

We live in a world where facts and fiction get blurred
In times of uncertainty you need journalism you can trust. For only R75 per month, you have access to a world of in-depth analyses, investigative journalism, top opinions and a range of features. Journalism strengthens democracy. Invest in the future today.
Subscribe to News24
Related Links
8 Best dressed MPs and bigwigs that walked the SONA 2019 red carpet
Danai Gurira: "Fashion is my learning art form"
Here are the top headturning looks from the SAG awards red carpet
Next on W24
Paris Fashion Week IRL - Dior, Chanel, Valentino and Fendi among luxury houses to showcase