Beading, feathers and pops of colour - here are the standout looks from the SONA red carpet Thembeka Ngcobo arrives at the State of the Nation Address (SONA) on February 13, 2020 in Cape Town. (Photo by Gallo Images/Brenton Geach)

One of the most important annual events in South Africa has arrived, and the political elite (and celebrity guests) graced the increasingly popular State of the Nation Address (SONA) red carpet.

The much anticipated political event continues to be a critical time in the country. Still, amid controversial politics and a volatile economy, South Africans always find time for fashion therapy —  thankfully.

We expected our politicians and their partners to live up to their reputation of sartorial flamboyance and luxury as they arrived to hear President Cyril Ramaphosa's State of the Nation Address - and they delivered.

At the risk of being swallowed by national politics, these were the standout looks spotted on the red carpet.

The first mention goes to the woman of the moment, Miss Universe Zozibini Tunzi, who has temporarily returned to home soil and is gracing Parliament as one of the President's honourable guests. She showed up as a ray of sunshine in a plunging beaded yellow gown.

Pinky Kekana, deputy minister of communications, was one of the first national leaders to arrive wearing a muted shade of pink gown featuring a feathered off-shoulder neckline, an asymmetrical peplum and a mermaid style skirt, all tied together with head-to-toe embellishments. 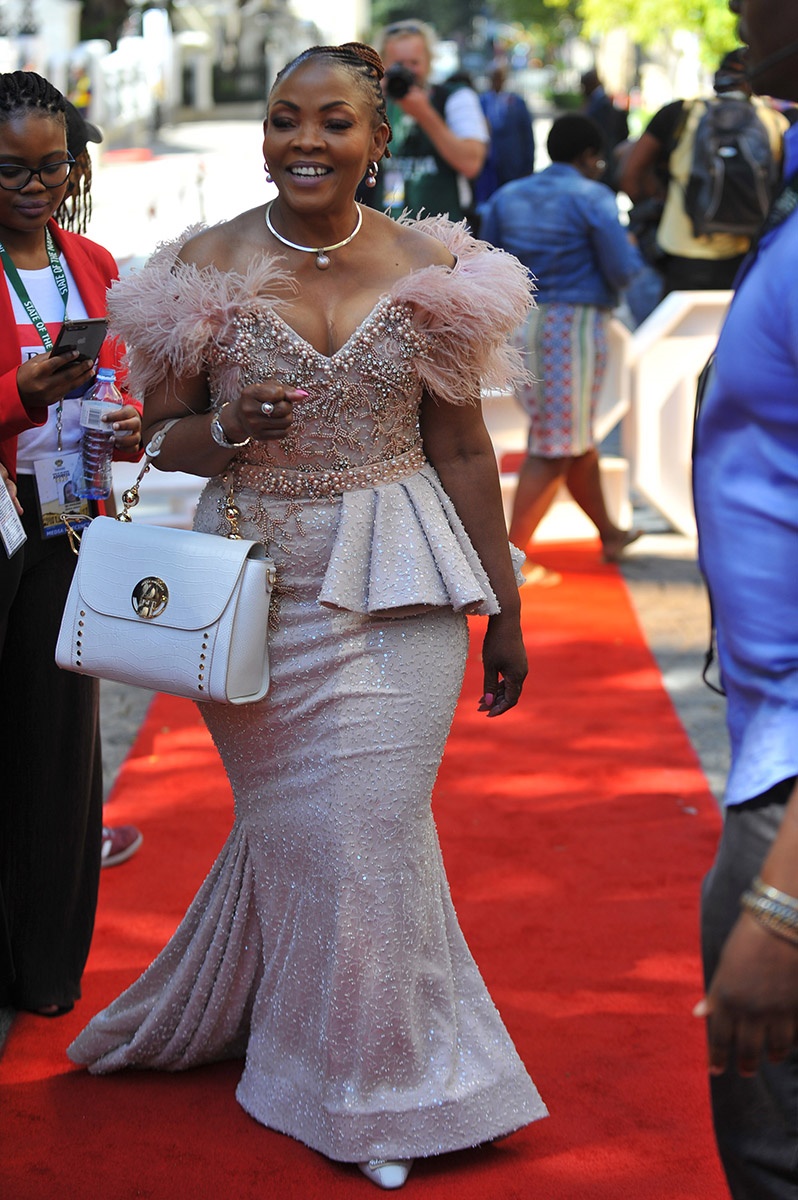 READ MORE: Loadshedding blues? Here's a style survival guide for those four-hour power trips during the day (and night)

The consistent stars of the political red carpet are Thembeka Ngcobo and her husband Bheki Cele, minister of police, and Rabia Clarke with her husband ANC member of Parliament (MP) Mandla Mandela.

Thembeka Ngcobo is literally (almost) dripping gold in an intricately beaded one-shoulder gown with a modest train. The look is completed by an understated beauty look and minimal jewellery. Keeping with their traditional inspired fashion streak, Rabia walked the carpet with her husband in a coordinated cream and black look. Rabia’s regal reimagined traditional gown is paired with a cropped structured cape with gold embroidery. DA MP Phumzile van Damme arrived on the SONA red carpet in a monochromatic combo with a pop of red.

Nocawe Mafu, deputy minister of sports, arts and culture, showed up in Parliament in a Mantsho-esque neckpiece.

This evening we are in Parliament to listen to President @CyrilRamaphosa when he delivers the State of the Nation Address to the Joint Sitting of Parliament's National Assembly #NA and National Council Of Provinces #NCOP #SONA2020 pic.twitter.com/2qSfbuXTcP

READ MORE: Young women MPs like Nompendulo Mkhatshwa should feel free to wear whatever they want in Parliament

Media personality Ntando Duma is spotted on the red carpet in a printed black and white off-shoulder dress. Alongside her is a fellow media personality and model Babalwa Mneno in a frilled yellow dress. Nozuko Mbalula showed up with her husband Fikile, the minister of transport, in a navy and white printed dress. Closing the red carpet in a way only the first lady can, Dr Tshepo Motsepe is seen in a printed maxi dress. Let us know what your thoughts are on the fashion choices seen on the SONA red carpet here.

We live in a world where facts and fiction get blurred
In times of uncertainty you need journalism you can trust. For 14 free days, you can have access to a world of in-depth analyses, investigative journalism, top opinions and a range of features. Journalism strengthens democracy. Invest in the future today. Thereafter you will be billed R75 per month. You can cancel anytime and if you cancel within 14 days you won't be billed.
Subscribe to News24
Related Links
GALLERY: Platinum blonde cuts, bobs and Rapunzel ponytails, top 14 hair looks spotted at the...
25 times Christian Siriano proved it's possible to create red carpet showstoppers for all body...
BAFTA attendees were urged to wear sustainable outfits, but only a few reduced their carbon...
Next on Life
Some of my best outfits cost R100 or less - Here's how I make the most of thrifting