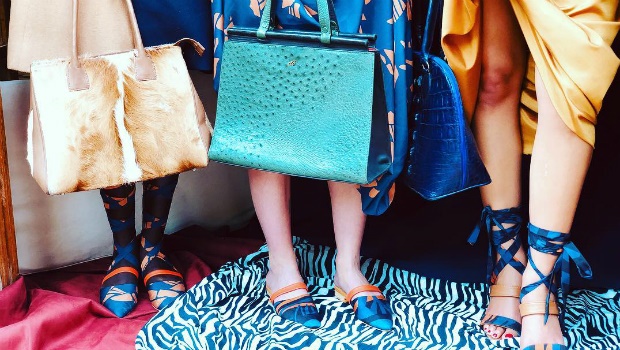 Vogue authorities were not kidding when they said they've got their eye on African designers and creatives. This has become even more evident with all the recognition they've been giving to South African fashion.

This is not to say that African talent only matters when international headhonchos finally cast their gaze on them, but it's always a moment worth applauding when our local designers make their mark globally.

READ MORE: We're celebrating Palesa Mokubung's Mantsho as they make fashion history as the first African label to collaborate with the H&M brand

And this week, two designers that got a nod from Vogue were Cape Town-based designer Mzukisi Mbane of Imprint ZA, and Senegalese designer Diarra Bousso of Diarrablu.

This, therefore, serves as testimony to what Suzy Menkes said in conversation with W24 earlier this month when she said she "believes that African designers - like others across the world, will all make it into magazines - if their work and their attitude merits it".

And one such African designer whose work has merited an appearance in Vogue is Diarra Bousso. In the June issue of Vogue U.S, this Senegalese founder of DIARRABLU, who calls herself a "creative mathematician," has one of her swimsuits modelled by Kendall Jenner in an editorial shot by Oliver Hardlee Pearch.

The image has not yet been posted on Vogue's Instagram account, but the leggy Kardashian-Jenner has shared it on her personal page.

The Sillicon Valley-based designer has taken much delight in her Vogue moment for a shoot, which the publication boasts that it features "summer's coolest swimwear".

I mean, who wouldn't?

About the brand: DIARRABLU's mission is to iterate for sustainability while highlighting the African continent’s rich colors and unique patterns through practical and versatile pieces designed using mathematical concepts or algorithms.

A reputable designer who needs no formal introduction is Imprint ZA, who regularly dresses South Africa's top celebrities for events such as the polo and the races.

Mzukisi created a stir on the runway at AFI Fashion Week with his show that paid homage to his Xhosa heritage, wowoing fashion industry bigwigs. And now, it appears that one his creations shot by Cologne/Düsseldorf-based photographer LeFu, has been featured in Vogue Italia.

The designer accompanied the post with a very fitting hashtag for this moment - #Leaveamark - and that is exactly what he has done thus far in his career.

We live in a world where facts and fiction get blurred
In times of uncertainty you need journalism you can trust. For only R75 per month, you have access to a world of in-depth analyses, investigative journalism, top opinions and a range of features. Journalism strengthens democracy. Invest in the future today.
Subscribe to News24
Related Links
This designer is using roadkill for fashion - is it a hairy idea?
From Naomi Campbell to Rich Mnisi's Sunday hats, this is everything we loved about Arise Fashion...
We're celebrating Palesa Mokubung's Mantsho as they make fashion history as the first African...
Next on W24
Our favourite celebs and influencers glam up to celebrate a champagne moment