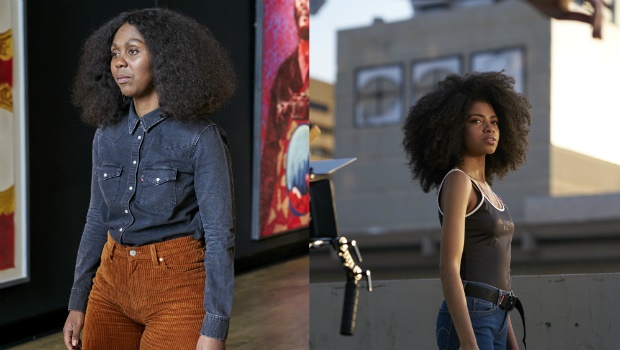 Right on the heels of an eventful Women's Month that not only celebrated cutting-edge women, but also underscored the plight of women in South Africa in terms of safety, equality and gender-based violence.

It's therefore fitting that Levi’s South Africa has identified and collaborated with two impactful local women whose visibility is characterised by both the conversations we've been having throughout the month of August; Nandi Dlepu and Zulaikha Patel.

They not only embody the spirit of “I Shape My World” - a global initiative dedicated to celebrating and elevating the extraordinary women who move our world forward every day - but represent the soul of the Levi’s brand which has always been at the center of culture, inspiring self-expression and originality.

Nandi Dlepu, who goes by Mama ka Shaka on social media, is a multi-faceted creative whose endeavor is always led by the sole purpose of making a difference in the lives of women in her community and around South Africa. Two of her most noteworthy programs are BLOOM, a platform dedicated to the empowerment of female creative entrepreneurs; and the Feel Good Series which is a monthly rooftop event that features emerging DJ’s and live performers.

READ MORE: “Expect everything you’ve come to know and love, but more!” - Nandi Dlepu on the UMI: Our Music Festival

The Feel Good Series prides itself on the inclusion of women in all aspects of the event from the talent to the supplier chain. A DJ set is allocated for Pussy Party at all events which is an organization that mentors and supports aspiring LGBTQI DJ’s. At age 13, Zulaikha Patel became the symbol of the fight against racism at Pretoria High School for Girls, when she led a protest against the racism within schools in South Africa and for the decolonisation of hair policies in schools, which was followed by several protests across South Africa.

Today, at age 17, Zulaikha is the Executive Director and ambassador for Kidz Of Biko, the youngest ambassador for the Charlotte Mannya Maxeke Instutution and an ambassador for the Thuma Foundation. Zulaikha is also currently leading a movement alongside a local Black owned natural hair brand, My Natural, petitioning to the South African Department for the establishment of a Natural Hair act which will protect the identity of African learners by giving them the right to wear their Natural hair in schools without prejudice. Head of Marketing Levi Strauss South Africa, Candace Gilowey expressed how exciting it is to "add strong South African voices to this campaign celebrating fearless women who have stepped up, broken barriers and made a difference in their communities and the world at large."

Watch the full "I Shape My World" campaign video below:

We live in a world where facts and fiction get blurred
In times of uncertainty you need journalism you can trust. For only R75 per month, you have access to a world of in-depth analyses, investigative journalism, top opinions and a range of features. Journalism strengthens democracy. Invest in the future today.
Subscribe to News24
Related Links
WATCH: Kenyan stylist says more LGBT people should be included in runways
These young girls' questions to African leaders remind us of a letter Meghan Markle once wrote as...
7 of the best local women's networks to join this year to help you hustle better
Next on W24
Trends are irrelevant, but why not treat yourself to an investment coat this payday weekend?