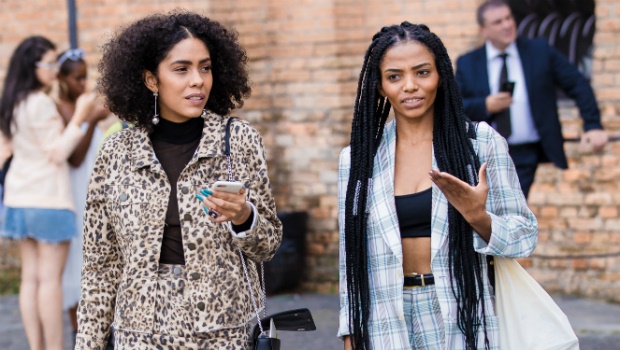 Met Gala buzz is still in the air as the Camp: Notes on Fashion exhibition has officially opened at the Metropolitan Museum of Art, and with VOGUE on everyone's lips this week, we had to hear from one of the international publication's most prominent names - Suzy Menkes.

With Grace at LV Cruise

"Could we expect our own Met Gala in the near future?"

"Will South Africa ever have its own edition of Vogue Magazine?"

These might be just two of your burning questions. And while we think the answer to the first question should definitely be a resounding "no" for now, we are still wondering about the latter, which Suzy Menkes addressed in our conversation.

With the CNI Luxury Conference behind us by exactly a month, and Thando Hopa's Vogue Portugal cover, April became the month that opened the conversation about where exactly we find ourselves as the African continent in the global fashion ranks.

In light of this, we thought if fit to further expand on a topic we had explored during Suzy's visit to South Africa.

This is what we learnt this time around:

[African fashion] is so much more than straw hats decorated with coloured threads - however charming that might be.

Africa has been a burgeoning continent in the world of fashion for some time now - where do you think Africa now fits in the global luxury space?

The CNI Luxury Conference has travelled the world - from Europe to the Middle East to Asia. The event changes city and theme each year, and we at Condé Nast International thought it was high time to take the event to the African continent. We recognise that is has become a new and exciting frontier to the ever-changing concept of luxury in today’s world. As our chairman and chief executive Jonathan Newhouse said in his opening remarks, “Africa boasts a burgeoning home-grown luxury and design industry. At the same time, luxury producers and retailers from outside Africa are beginning to establish their presence here. In the last 15 to 20 years, much of the growth in the industry has been driven by Asia. Surely Africa will play a key role in the growth of the industry in the years to come.”

What is the importance of Afrocentric luxury in today’s sartorial climate?

I see two separate elements to Afrocentric luxury. Primarily, the stretch of African design lies in handwork. But I think that needs a much broader definition than the concept of a line of embroidery on a collar or on a hemline.

The survival of Batik in all its extraordinary detail depends on the few African countries who still use this ancient tradition. I think that Africa needs to bang its drum about the sophistication of the work. It is so much more than straw hats decorated with coloured threads - however charming that might be.

Aside: A local designer such as Lukhanyo Mdingi comes to mind when Suzy mentions "sophistication".

READ MORE: Kefilwe Mabote gives us the inside scoop on how to be a successful luxury influencer in SA's dynamic social media space

The Consumer 2020 report suggested that our biggest consumers are going to be Generation Z – do you think they will consume luxury differently (more consciously perhaps) to how it has been previously consumed?

I cannot answer for Africa because I do not have the deep knowledge of the [continent]. But I believe in general that young people are aware of - and sensitive to - the concerns around our planet, which in turn will influence their purchase and consumer patterns - what they buy and how much of it.

Luxury should never be defined by price.

Given our economy, do you think South Africa is ready to support its luxury designers or do you think we should be applying a different mindset to luxury that isn’t just based on the monetary aspect?

Luxury should never be defined by price. Instead, the value should be seen and judged by quality and workmanship. Cape Town, for example, already has a number of local designers who make classic and beautiful clothes.

If Vogue Africa were to finally hit our shores, what would it mean for African designers?

The subject of Vogue Africa is a challenge!

How do you make a magazine for a continent? I am leaving Jonathan Newhouse to solve this problem.

But I believe that African designers - like others across the world, will all make it into magazines - if their work and their attitude merits it.

With textile designer Sindiso Khumalo, based between Cape Town and London and trained at Central Saint Martins at Hanneli Rupert’s Cape Town store

Your Instagram has been showing an appreciation for local fashion trailblazers recently. Which of our designers/creatives have you had your eye on for a while? And which should the world watch out for?

I came on this latest trip to Cape Town via Johannesburg especially, to see the new art premises of Laduma Ngxokolo. He has brought together creativity and entrepreneurial flair to build his Maxhosa by Laduma business. And I saw his show in Cape Town.

He is doing all the right things to ultimately go global. I wish international success to all upcoming and hardworking African designers success.

Bravo Laduma for a powerful and much cheered collection

We live in a world where facts and fiction get blurred
In times of uncertainty you need journalism you can trust. For 14 free days, you can have access to a world of in-depth analyses, investigative journalism, top opinions and a range of features. Journalism strengthens democracy. Invest in the future today. Thereafter you will be billed R75 per month. You can cancel anytime and if you cancel within 14 days you won't be billed.
Subscribe to News24
Related Links
Feathers, frills and fairy tale gowns - all the extravagant looks we loved from the Met Gala 2019...
5 things you can do now to practice ethical fashion
We're celebrating Palesa Mokubung's Mantsho as they make fashion history as the first African...
Next on W24
Designer Fikile Sokhulu on how her brand embraces 'slow fashion'