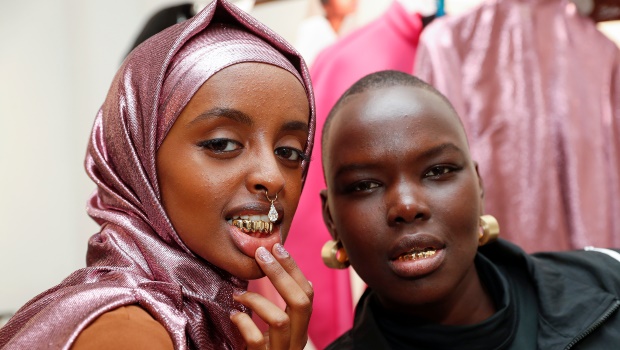 Models backstage ahead of the Launch of Sabirah by Deborah Latouche Beautifully Modest during London Fashion Week. (Photo by Luke Walker/BFC/Getty Images)

Here, she explains what modest fashion is and grapples with its complexities in a modern world of social media, luxury, and mainstream fashion media.

This is what Hafsa shared:

Silhouettes are loose-fitting and not tight. However, we have seen a lot of modest influencers who do wear tight clothes and form-fitting clothes and as long as the skin is covered, we do believe that it’s still modest.

Typically, when you look at modesty from a religious perspective, the whole point is not to stand out - it's to blend in and avoid attracting attention to yourself as a woman. The idea of the hijab is that it’s this veil of privacy between the genders, so it’s very inspirational to see all these hijabi fashion bloggers and supermodels on social media and on runways. But it kind of contradicts with this traditional conservative faith-based aspect of modesty.

On the social media aspect, it isn’t modest to be posting selfies and living on social media for likes and for fame. Selling images of yourself – is that modest?

Spending money on Louis Vuitton and Gucci hijabs – is that modest? Is it representative of a modest lifestyle?

These are the debates that are explored in the book.

We live in a world where facts and fiction get blurred
In times of uncertainty you need journalism you can trust. For 14 free days, you can have access to a world of in-depth analyses, investigative journalism, top opinions and a range of features. Journalism strengthens democracy. Invest in the future today. Thereafter you will be billed R75 per month. You can cancel anytime and if you cancel within 14 days you won't be billed.
Subscribe to News24
Related Links
Duchess Meghan Markle's style would have gotten approval from the late Joan Rivers
EXCLUSIVE | Trenery to launch first-ever international Spring/Summer campaign shot in SA
Craving stylish summer reads? Here are the latest fashion books perfect for your coffee table
Next on W24
Brands are leaning on ‘recycled’ clothes to meet sustainability goals. But how are they made?