Nicolas Ghesquière presented the Louis Vuitton Fall/Winter 2020 collection in Paris at the Louvre Museum at a star-studded show this week. 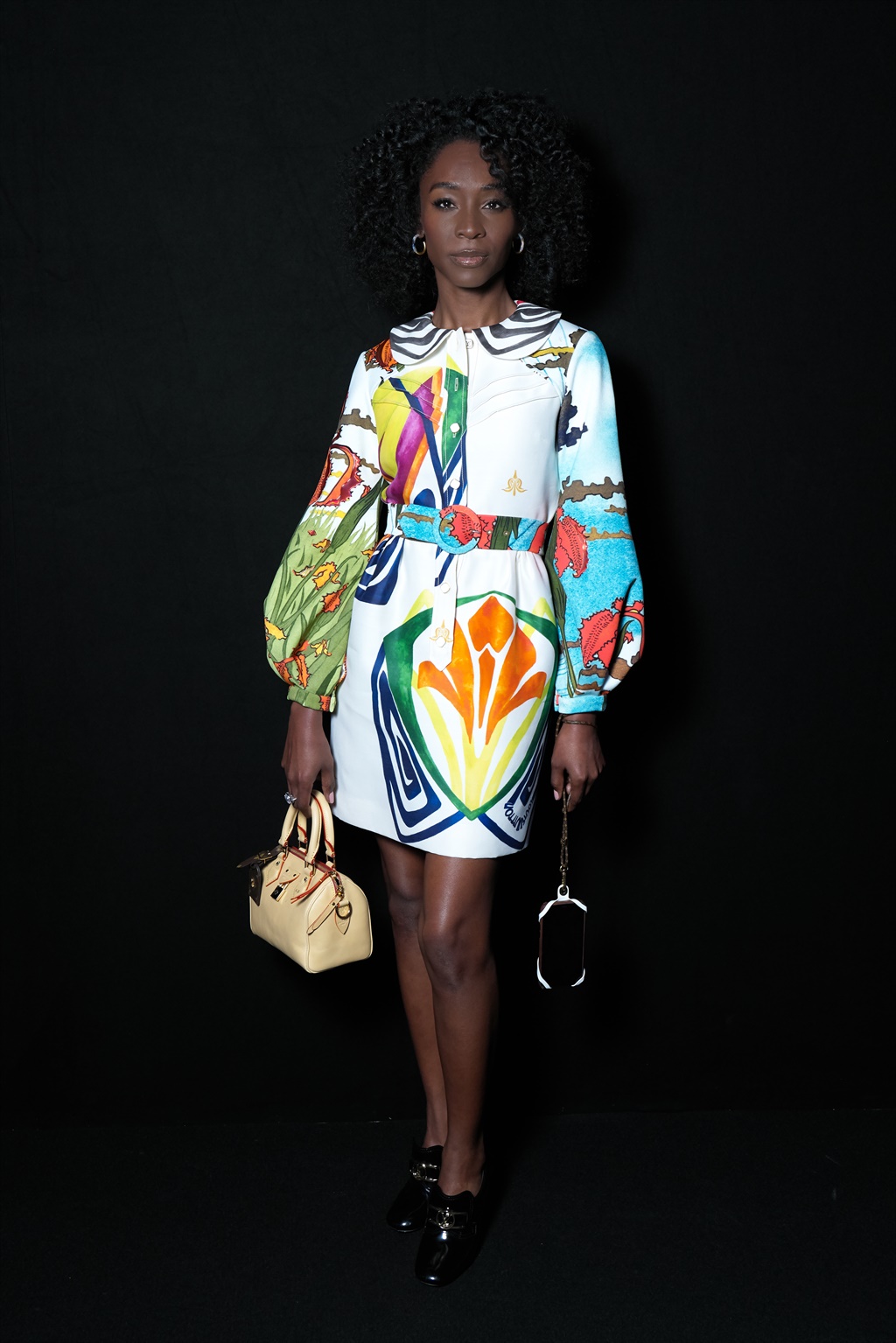 All images supplied by Louis Vuitton According to Louis Vuitton, the piece’s title,“Three Hundred and Twenty”, refers to the number of years between the various movements referenced in a baroque composition injected with minimalistic, repetitive musical verses.

What is the inspiration for this collection?

In fashion, the notion of time is primordial. I wanted different eras to be confronted with another one, our own. All of these “pasts”, embodied by a gallery of personalities in period dress, converge in our present. We are all together, looking at a collection that itself recounts a living, perennial, stylistic clash — and everything we can do with clothes by mixing and free-associating them.

It’s sort of an anachrony of genres. It can simply be the pleasure of dressing and its many possibilities, free of protocolor constraint. Taking what we already have at home and mixing it with what we like that’s new. This collection is about an “anti-total-look” that draws on individual personality, on the agility one experiences when confronting one’s own closet.

A piece of functional clothing can be part of formal dress, and vice versa. It’s a proposition I wanted to be open, energetic and spontaneous. This collection is about sartorial “tuning”.

What if all of the innumerable eras that nourish fashion could come together in the here and now? And what if, in the present moment, we could confront history with contemporary freedoms, staged for the pure pleasure of fashion? A clash of styles, unexpected pairings, subverted functions... Dressing without protocol.
Nicolas Ghesquière

Where did you find these characters?

We worked with the talented costumer Milena Canonero, who notably worked on Stanley Kubrick’s films “A Clockwork Orange”, “Barry Lyndon” and “The Shining”,among other highly successful films. She created 200 characters ranging from the 15th century to 1950. In counterpoint, there’s music composed by Woodkid and Bryce Dessner, who also worked on time clashes.

Their piece is called “Three Hundred and Twenty”, a reference to the number of years between the various movements in the baroque composition that’s also been injected with minimalist,repetitive music. They resurrected the composer Nicolas de Grigny, a contemporary of Bach, who was never recognised by his peers and who never had the chance to play at the Louvre. Today, centuries later, he’s finally being heard! We’ve revived him.The performance was orchestrated by theater director Francisco Negrin. 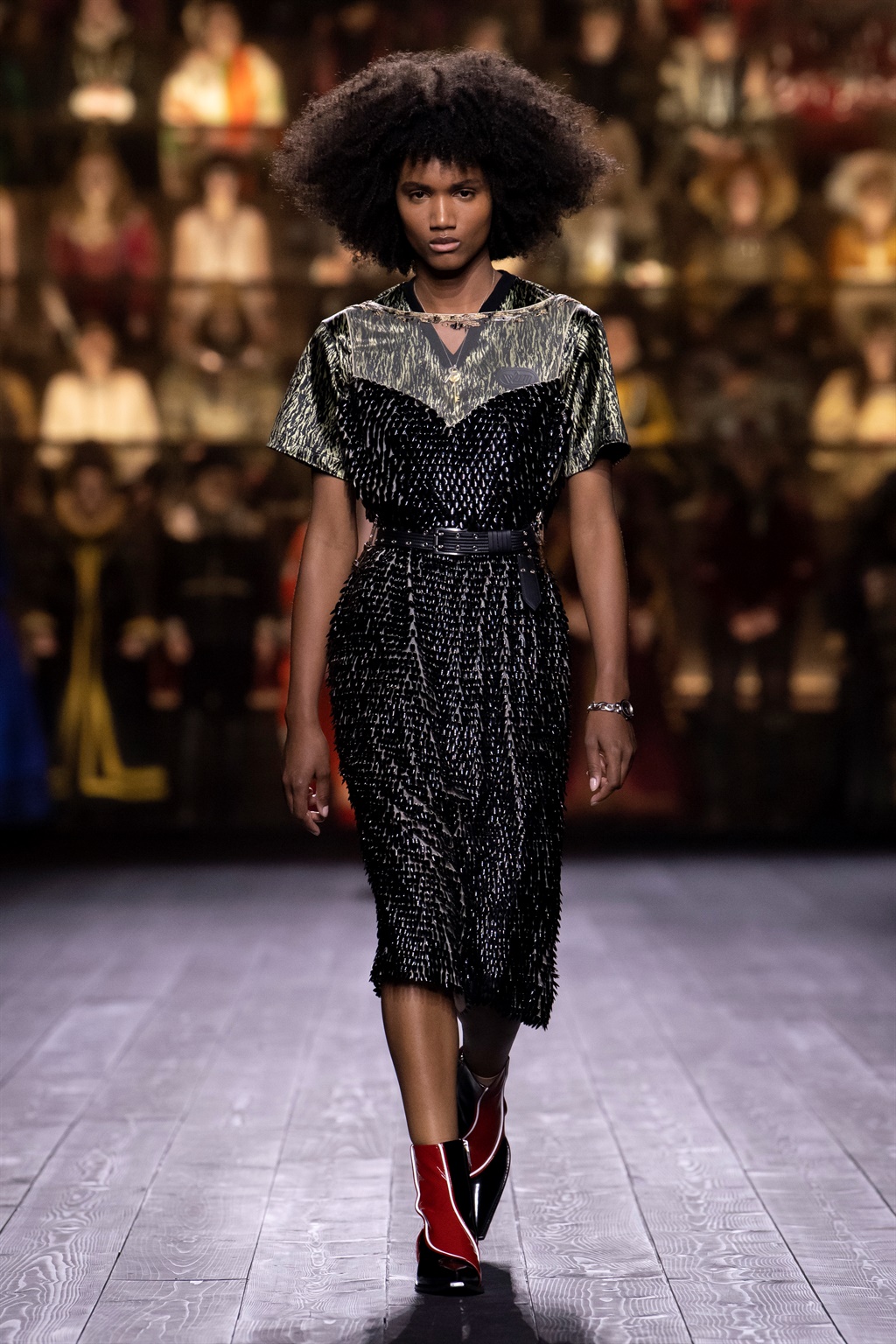 Please can you walk us through the creative process for the shoes and accessories?

There’s the Keepall — a pure, vintage piece that acquired a beautiful patina over time. We just customised it with a new strap. There are also small satchels, mini-totes and strange little streamlined minaudières. Shoes also illustrate a very free rein: revisited boots, metal cap-toe pumps that evoke wheel rims on a customised car. As with the last show, it’s very stripped-back. It’s an immense stage where we are all the players are in the moment. Who are the actors? Who are the spectators? All these cumulative periods are together in the same place. In the gallery, there’s the past. On the benches, the present. On the runway, the not-so-distant future.

For this show, a rented glass structure covers a wood and Valchromat decor that is 100%certified PEFC (Program for the Endorsement of Forest Certification).

Not moving away entirely from the subject of the set, it's evident from the scenography notes that there's more to it than meets the discerning Louis Vuitton show attendee's eye, as Nicolas Ghesquière explains all the wooden decor elements will be donated for reuse to various organisations in France. A nod to fashion's progression towards sustainability also played a role in the set, as the wooden flooring which originates from the Landes region was sourced from sustainably managed forests in France. We live in a world where facts and fiction get blurred
In times of uncertainty you need journalism you can trust. For 14 free days, you can have access to a world of in-depth analyses, investigative journalism, top opinions and a range of features. Journalism strengthens democracy. Invest in the future today. Thereafter you will be billed R75 per month. You can cancel anytime and if you cancel within 14 days you won't be billed.
Subscribe to News24
Related Links
Chew Gucci, sip Louis Vuitton, and pastries by Prada: Nibble on luxury with these...
Is the dress green or red? Planet-friendly couture won’t be for everyone but it can lead the way
Ruffles, jewel tones, metallics, and high slits take center stage on the 2020 Oscars red carpet
Next on Life
Consumers still splurging on luxury items despite soaring prices