The octogenarian owners of a decades-old dry cleaning business in Taiwan have suddenly found themselves featuring in the world’s leading fashion magazines after they began modelling clothes left behind by their customers.

Wan-ji Chang, 83, alongside his wife Sho-er Hsu, 84, has been the sole proprietor of the Wansho laundry shop in Houli District in Taiwan’s western coastal city of Taichung since 1951. The fashion-forward couple are quickly closing in on 100,000 followers since their Instagram account went live just a few weeks ago.

Their social media handle ‘Want Show’ is a play on their shop’s name, Wansho, which itself contains elements from their names, Wan-ji and Sho-er. Bringing their traditional dry cleaning business into the digital age was the brainchild of their grandson, Reef Chang. Reef, 31, told Asia Wire he came up with the idea of having his granddad and grandma model left-behind clothes while cooped up at home during the global pandemic. His grandparents have kept old clothing for decades after the items were cleaned but, for one reason or another, never collected. “They ask for contact details now, but they never used to before, so some clothes were forgotten forever. Since they work on the principle of trust, they would wash the clothes first and ask for payment later," Reef explains.

“My grandparents have donated a lot of the forgotten clothing to charity or disaster relief in the past, but some items, like gowns, for example, aren’t suitable for that.” Wan-ji and Sho-er thought it would be a waste to simply throw them away, their grandson said, adding, “Even though they knew the customers would never return.” Pictures on their Instagram page show Wan-ji modelling oversized suit jackets and shirts which would not look out of place in a hipster’s wardrobe. Meanwhile, Sho-er looks just as comfortable in a tan suit as she does in a T-shirt, skirt and Converse trainers. Despite having never modelled before, the Taiwanese lovebirds seem perfectly at ease in front of the camera, even in full activewear and bucket hats left behind by former clients. Now their grandson seems just as surprised as anyone to see them appear in the Taiwanese editions of Vogue, GQ, Marie Claire, Cosmopolitan, and Hong Kong’s Esquire.

“At first they were really embarrassed by the idea, but I think they’re now used to the publicity," said Reef.

“People are recognising them on the street!” Reef’s granddad describes himself as a single-generation business owner who has yet to pass his dry cleaning shop to his children or grandchildren. Wan-ji did not study beyond primary school and went on to work briefly as an apprentice in a laundry service before it closed down. 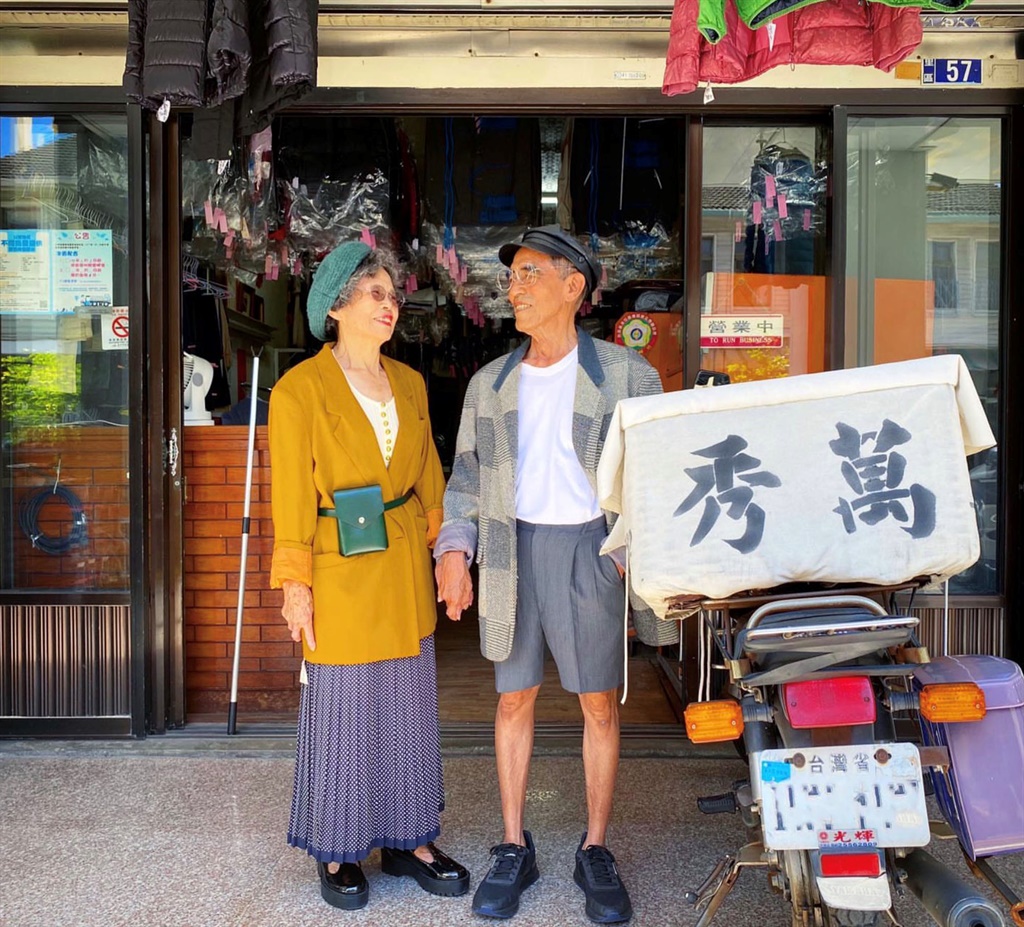 In 1951, at the age of 14, he opened his own dry cleaning shop in his native Houli, which used to be a rural township before it was upgraded to a district of Taichung in 2010. The business will celebrate its 70th anniversary next year. A young Wan-ji met his future wife during a date arranged by neighbours and family members. They married in 1958 when he was 21 and she was 22. “My granddad said he waited six months before marrying her because he was still uncertain about his financial stability. His relatives stepped in and called him into their sitting room for a talking-to before he finally agreed,” the couple's grandson recalls.

Sho-er was a civil servant working for Taiwan’s revenue service at the time and later gave up her job to tend to Wan-ji’s dry cleaning shop when he was conscripted into the army for two years.

Reef said that his grandma "sometimes wonders what life would’ve been like had she kept her government job."

“After my grandfather returned from military service, he renamed the shop ‘Wansho’ because of her. “The pair of them find the business tiring because they still prefer to wash clothes by hand and don’t just throw them in a washing machine. “My granddad still gets on his old 125cc scooter every morning to collect or deliver laundry. “There is also the risk of accidentally damaging expensive clothing. “They’re always going on about how they should close the business and finally retire, but I think they’d be bored.” The Chang family lives above their laundry service, while over the decades the shop floor has been something akin to a salon where neighbours and old acquaintances gather for a chat. Reef added that "many of their old friends are no longer around. That’s had an effect on them psychologically, so they tend not to go out much any more. “I hope to take this opportunity to make the public more aware of small traditional businesses like theirs.” We live in a world where facts and fiction get blurred
In times of uncertainty you need journalism you can trust. For 14 free days, you can have access to a world of in-depth analyses, investigative journalism, top opinions and a range of features. Journalism strengthens democracy. Invest in the future today. Thereafter you will be billed R75 per month. You can cancel anytime and if you cancel within 14 days you won't be billed.
Subscribe to News24
Related Links
5 tips on how to maintain your Instagram aesthetic in the wintertime just like the top...
These 5 Instagram influencers over 50 you should follow show us how true it is that 'greys' have...
Dame Judi Dench making history as the oldest British Vogue cover star at 85 is great news. But why?
Next on Life
Consumers still splurging on luxury items despite soaring prices