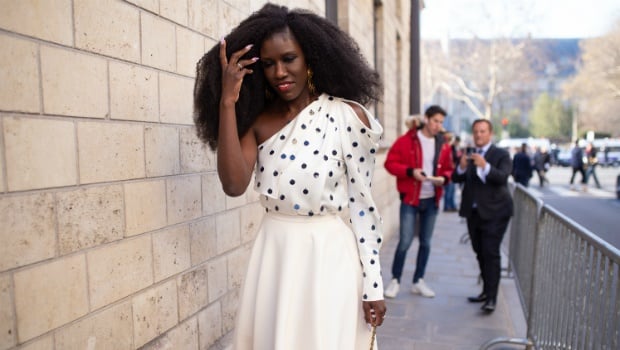 It's all about big hair and retro prints.

Lately I've been enjoying every series set in the 1980s - not only for the drama, but for the fashion. And that's probably because any form of entertainment with a gifted wardrobe director behind it always gains my respect, regardless of what decade it's set in.

With '90s TV shows resurfacing all over streaming platforms, you'd think the fashion throwbacks from said shows are still dominating in our wardrobes and Instagram feeds. However, '80s key trends are slowly dethroning the Fresh Prince of the 1990s.

We saw this with Jeremy Scott's Moschino 'The Price Is Right' runway show at Milan Fashion Week earlier this year, where the king of camp even gave us microwave dinner purses.

READ MORE: Moschino's gameshow-inspired collection is the most entertaining runway show we didn't know we needed

And now we're seeing the sartorial gems of the '80s in some of our favourite TV series set in the 1980s, namely Pose, Stranger Things and GLOW.

I'll be the first to admit that I was absolutely floored by the vogue charm of FX TV series, Pose - from the abundance of fur coats in Elektra's cupboard to Blanca's bold leather jackets that you might now only find in hidden thrift stores.

Oh, and not to mention the costumes at every ball. But speaking of thrift/vintage stores, Lou Eyrich - the costume director for Pose - told Who What Wear that "learning where all the good vintage stores were for all the ’80s clothes took some time".

"We had a great time finding pieces for Pray Tell [Billy Porter]. His closet was from every corner of Manhattan, New Jersey, Los Angeles, Pennsylvania and beyond," she added.

Here are more standout fashion moments from this groundbreaking series:

Tonight IT'S ON!!!! ONLY @poseonfx

Who can you run to when things get too elektric? #PoseFX returns tomorrow at 10p on @FXNetworks.

Not so much a high fashion extravaganza as Pose, but the retro fashion appeal of Stranger Things (now on its third season) is quite undeniable. This, especially given the fact that season three is pretty much set in a mall in the small town of Hawkins, meaning we regularly see '80s retail through the store displays at The Gap and J.C. Penney.

Furthermore, this new season is set in 1985, a time when the Levi’s brand had a massive imprint on culture. It's no wonder there's now a Levi’s X Stranger Things capsule collection.

Just when you thought it was safe to go back to the mall. Levi's® x Stranger Things. Winter 2019

The collection is now available at selected Levi’s stores - where you can buy the Camp Know Where Ringer Tee worn by Dustin, which is an in-show look - and in addition, there is a range of other pieces that celebrate various elements of the show.

Tees and sweatshirts with Stranger Things graphics and phrases, jeans with hi-res character images, special edition Levi’s sundries, like upside down patches and red tabs (a nod to the 'Upside Down', of course), and a one-of-a-kind Levi’s batwing tee that uses the Stranger Things title graphics.

Full of twists and turns. Levi's® x Stranger Things Expect the unexpected from our newest collection.

Lastly, GLOW is another Netflix series set in the 1980s with a wardrobe offering that probably mostly intrigues fitness enthusiasts who might've also sported the bright spandex athleisure trend of the time, if even just once a week because it's actually a little OTT for day-to-day training.

Or it might just inspire your next Halloween costume. But don't be quick to dismiss this one - there is a decent amount of actual glam to take in here too.

Loves in an elevator, livin’ it up while we’re glowin’ down. #glownetflix ??

Also set in 1985, this comedy is about Hollywood misfits - with Alison Brie playing the role of Ruth Wilder - who find themselves auditioning for a women's wrestling show in Los Angeles, and that's where we get to appreciate bold and offbeat fitness gear from the first season, but from there on there's quite an interesting selection of costumes that we see later in the series.

Costume designer Beth Morgan told CR Fashionbook that she used clothing "to speak volumes about the relationship between wealth and appearance".

CR Fashionbook also described the wardrobe on this show as follows;

"While there are plenty of retro windbreakers, scrunchies and big teased hair, the women are mostly casual and comfortable in their day-to-day clothing."

So are you ready to wear pink spandex to the gym, washed out denims to the mall and swanky gowns to dates and evening soirees? I sure am.

We live in a world where facts and fiction get blurred
In times of uncertainty you need journalism you can trust. For 14 free days, you can have access to a world of in-depth analyses, investigative journalism, top opinions and a range of features. Journalism strengthens democracy. Invest in the future today. Thereafter you will be billed R75 per month. You can cancel anytime and if you cancel within 14 days you won't be billed.
Subscribe to News24
Related Links
We're all wearing mini skirts as part of this year's winter uniform
Square toe shoes are shaping the future of footwear
These 5 women prove why the turtleneck is forever
Next on Life
Consumers still splurging on luxury items despite soaring prices