The biggest fashion trends of the decade, and the celebrities and runway shows that popularised them 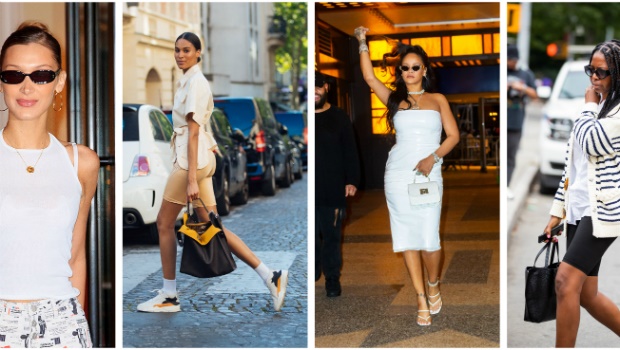 Tiny sunglasses, biker shorts, and Breton stripes are just a few of the trends that characterised this decade. Collage by Afika Jadezweni

Nautical, or Breton, stripes were introduced to high fashion by Coco Chanel in 1917. The design reemerged on the runway in spring  2010. The skinny jean took over in the 2000s and became mainstream by 2010, solidifying itself as the ultimate wardrobe staple. Gladiator sandals were a standout at the Chanel St. Tropez Cruise show.

Alexander McQueen created the skull scarf, and it became one of the most iconic accessories of its time.

Crop tops surged to popularity alongside a new wave of '90s trends, while the likes of Jessica Alba, Anna Kendrick, and Sarah Jessica Parker all loved bright jeans

Perhaps loved most by Rachel Zoe, fur vests were the peak of Autumn/Winter fashion in 2012. Statement necklaces came with the boho trend.

READ MORE: Fashion icons passed on and historic awards were won - these are the top fashion news of 2019

Statement sunglasses - from embellished to colourful options - were huge on the runway in 2013.

And Converse's enduring classic sneaker is the reason white sneakers were so highly coveted in 2013 onward.

Celebrities like Mindy Kaling and Olivia Palermo wore co-ords on the red carpet all throughout summer '14. Beyoncé wore a grey sweater in her 7/11 music video, while models wore sneakers on the runway for Dior and Chanel.

Celebrities wore off-the-shoulder items all throughout summer in 2015. Denim skirt first became a popular trend in the '70s and made their return in 2015.

Velvet was the most popular fabric of A/W in 2016, with Balmain and Givenchy both debuting velvet looks at their shows. Celebrities like Rihanna kept the athleisure trend alive with her affinity for tracksuits as well as her Fenty x Puma range. And the choker from the '90s got an update in 2016.

Celebrities such as Bella Hadid and Rihanna popularised tiny sunglasses. The plaid became a versatile fashion favourite everywhere - from the red carpet to the airport.

White boots established themselves as a staple of any fashion editor's wardrobe.

Instagram and its influencers are at the forefront of the animal print skirt trend. The look was social media's favourite trend for the summer. Graphic tees also became a wardrobe staple in 2019.

We live in a world where facts and fiction get blurred
In times of uncertainty you need journalism you can trust. For only R75 per month, you have access to a world of in-depth analyses, investigative journalism, top opinions and a range of features. Journalism strengthens democracy. Invest in the future today.
Subscribe to News24
Next on W24
PICS | A park in full bloom: See all the adidas x IVY PARK Drip 2 collection campaign images