This artist purposely ruined R1.3 million worth of Chanel purses, Rolex watches and other designer items - the reason will intrigue you 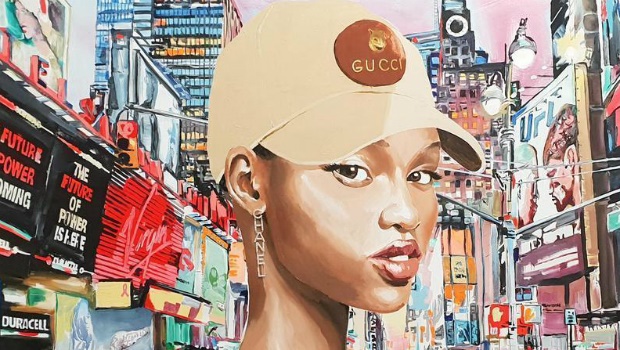 Most women wouldn’t dare draw on a designer handbag, never mind cut it in half, but 37-year-old Debbie Wingham from Doncaster, Yorks, decided to bite the bullet for her most recent project.

The mum-of-three admits it was "upsetting" when she cut the £30 00 (roughly R561 000) Hermes Birkin ostrich pink handbag, but she was determined to "do what nobody else has ever done." The items were mounted on to bespoke paintings to create a 3D effect and each one will be sold in excess of £75 000 (R1,4 million). And despite the high price tag, her loyal clients are already showing an interest in the paintings which will hang from  canvases that are almost 2 metres in height.

“I had a vision and it worked, but I couldn’t have done it alone, so I asked American artist Daniel Maltzman to get involved. We both put some money into a kitty, and I went on to raid some of my client’s wardrobes who tend to wear things just once before it goes out of season (sic)," Debbie explains. “I have a lot of nice and expensive items, but I like to get my wear out of it and my money’s worth. I’ve never seen anyone cut into designer products and mount them onto a canvas before so there wasn’t any instructions or guides for me to follow. It was brutal and quite upsetting when I began to dismantle the items.

“It took a lot of guts, but I knew the result would be worth it – the paintings are unique. The whole project was a one-shot opportunity as there was no way I was going to fork out another £30 000 [her share of about R560 000 in the investment) to try again if I had made a mistake. Although it was traumatic, I have actually preserved the bag as there will be no wear and tear and it can be admired by everyone," she says of one of the bags used in her painting. “When I dismantled the watches, I gave them to a designer Debra Franses Bean who makes resin art bags that must go into a compression chamber. The resin bag itself was £5000 (about R93 000). The watches could have shattered, but it was a risk I was willing to take.”

Debbie is best known for being one of the most expensive artists in the world as everything she creates has a luxurious twist. She adds, “When I proposed the idea to Daniel, he thought I was bonkers.

“He was more concerned about the canvases being ruined when I cut into them to incorporate the handbag to make it as real as possible. “I told him to look away but secretly I was a little anxious as there was no chance I could do it again.

“I would say I am the first person to create multi-medium textured images using expensive items. “The Chanel earrings and purse was mine and the rest were ‘reborn’ second hand items," she concludes.

Story and Images by: CEN/Magazine Features

We live in a world where facts and fiction get blurred
In times of uncertainty you need journalism you can trust. For 14 free days, you can have access to a world of in-depth analyses, investigative journalism, top opinions and a range of features. Journalism strengthens democracy. Invest in the future today. Thereafter you will be billed R75 per month. You can cancel anytime and if you cancel within 14 days you won't be billed.
Subscribe to News24
Related Links
This inventor spent 8 years developing denim eyewear to ensure that the planet sees a brighter...
They say Airpods give you street cred, but would you pay R1million for these Caviar Pro pods?
Suzelle DIY shares her beauty and fashion hacks
Next on Life
Consumers still splurging on luxury items despite soaring prices