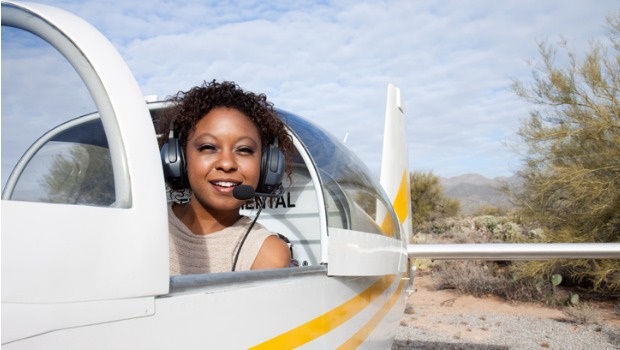 We have seen a few women on our social media feeds dressed in the pilot uniforms and it is very hard not to admire. They look strong, brave and they are taking on a world that is largely dominated by men.

These African women have helped inspire other young women to take on the aviation field and it is refreshing to see young woman take on this challenging career.

19 year-old Lesego Modungwa recently obtained her private pilot licence and showed off her accolades on Twitter like any proud person would.

So I officially became a private pilot today ??????????‍?? pic.twitter.com/mCZN3kYsLn

Lesego is currently working on obtaining her commercial licence which she believes she would be able to get by August next year.

READ MORE: Should you take the risk and resign when you have no options lined up?

Enrolling into a pilot training school is the easy the part. "All you have to do is get an application, register and once you get the funds for it - you just begin training. You can even begin training the next day," she says.

The process may sound simple but your private pilot licence can cost you between R 98 000 to R 110 000. This can be a steep price for those who cannot afford it. However, there are number of bursaries and scholarships available for people that cannot afford the fees.  Some of them cover the full costs including accommodation, food allowance and etc.

These bursaries and scholarships are available because according to Blue Chip Flight school, South Africa has a huge shortage of pilots in the aviation field.

"The aviation industry in South Africa has seen a massive exodus of highly trained aviation specialists who leave the country in search of the greener grass and higher incomes often found in the Middle East and Far East, as well as in Australia. This leaves the South African aviation industry at even more of a disadvantage than our global counterparts." The skills shortage means that there are jobs available in the aviation industry.

Obtaining your private pilot licence isalso based on your capabilities as a student because you work at your own pace and write exams when you feel that are ready to write.

According to Blue Chip Flight School you will need to complete:

All this can be completed in three months or may take longer says Modungwa. She says that it took her a year and three months to complete her training.

READ MORE: Thinking of working abroad? Here are the top 10 countries for women to pursue a career

Lesego says she loves being a pilot, "It really gives me an independent feeling. You feel like you are in control." She believes that for women, being a pilot gives them a chance to be fully dependent on themselves.

Especially in a field that was previously dominated by men. Lesego says that at her school there are a lot more women who are enrolling to become pilots, "It's really a beautiful thing to see," she says. "These days, airlines really like the whole female pilot - they go out of their way to find female pilots that are good."

Although there is some positivity around women that are pilots, Lesego says that they are some people who do not take likely to women that fly.

"It's still a manly world because from I have seen from Twitter people send me DMs telling me, 'No. how can a woman be a pilot?' 'We can't trust you', she says.

Although people still have these negative attitudes towards women who fly, they cannot take away from her the independence and pride she has gotten from becoming a pilot.

We live in a world where facts and fiction get blurred
In times of uncertainty you need journalism you can trust. For 14 free days, you can have access to a world of in-depth analyses, investigative journalism, top opinions and a range of features. Journalism strengthens democracy. Invest in the future today. Thereafter you will be billed R75 per month. You can cancel anytime and if you cancel within 14 days you won't be billed.
Subscribe to News24
Related Links
More women are leaving full-time employment to freelance than ever before: here are some insider...
How you can use social media to further your career
Young women under 25 who are making serious career moves in Africa
Next on Life
'I bought 10 cars in 4 years then lost them all and used taxis. But I'm rebuilding my business'