“I was catfished by my new dream job” Things like dream jobs aren't always as they seem

Starting a new job should be an exciting time, as you settle in to your new workspace, meet your new colleagues and get acquainted with your new workload. No doubt you’ve done your research on the company and have a freshly signed contract to guide you in your duties, and you feel ready to give it your all.

But what happens when your trust is betrayed? When the new job is not as advertised? These three women share their stories with us.

READ MORE: Want the big job? 4 women on top of their game tell us how to get that seat at the table

The start-up that stopped paying their employees

Toni told us how she was hired by an exciting new international start-up with offices in Durban.

“I was happy to be involved in many aspects of the new company, but soon I just had more and more work, until I was doing the full-time jobs of at least three people. And none of the work was even slightly in line with my actual skill set,” she told us.

Soon she began to realise that the company also had a cash flow problem. “I was told there are more than enough money to keep the start-up afloat for three years, and it was often mentioned that there were millions of dollars from European investors coming in.”

But then the company started paying employees later and later every month. “The people I worked with were really amazing and the product we worked on had a lot of potential. I felt frustrated, but still stayed positive that things might change.”

Toni says she repeatedly had open and honest conversations with top management about her concerns around operations, the product, the teams, the workload and the salary situation, and each time they listened attentively to what she had to say, “and then very diplomatically asserted that this was to be expected from a start-up and that things would soon improve”.

“I’m a loyal employee and believed them. But then the company reached a point where we didn’t get paid at all. My colleagues started resigning one by one every week. I was unfortunately one of the few who stayed. In the end, the company liquidated and we, the remaining employees, lost a fair amount of money in unpaid salaries,” she says.

“I felt very stupid for being naive and believing the excuses they gave us. It took me about six months to deal with the fact that I gave my trust, loyalty and time to this company, and that top management then didn't care about liquidating and leaving employees with huge amounts of debt,” Toni said, “I’ll now always be very cautious when considering job offers from new businesses.”

READ MORE: If you’re a millennial, here are some tips to earn your older colleagues’ respect and close the generational gap

It was a good learning curve although I wouldn't want to repeat it. I'm grateful that I was able to resign and get out of there immediately. Resigning was ultimately very empowering.

Rebecca shared how she was headhunted by a small Cape Town retailer that marketed products that she believed in, and how she was so excited for a fresh start. After a decade at her previous company she was ready for a new challenge, in a position that offered opportunities to learn and grow beyond her role.

Rebecca says she had slight concerns almost immediately, but that by the middle of the second month it was undeniable as they started giving her tasks that were way beyond the scope of her role. “They kept saying that because they're a small company everyone should have to jump in and do things beyond their scope sometimes, which I didn't have a problem with - as an exception, not as a rule.”

It soon became too much for her. “I was overwhelmed, and the expectations kept rising to unrealistic levels. I started to feel like I was being manipulated.”

Rebecca says she raised her concerns and made suggestions to improve the situation. “To my surprise, he told me that I just needed to get my act together and work longer hours if need be,” she told us.

READ MORE: You’ve heard about ghosting in relationships, but what if you’re guilty of workplace ghosting?

Rebecca was extremely unhappy and her mental health was being affected. “I first blamed myself, but luckily I soon realised that I was not alone in my concerns. The culture of the company was filled with distrust and zero respect, and possibly even slightly dodgy ethics.”

The last straw came for her when she raised a concern about a task that seemed ethically risky, and asked for more time to investigate. “I was told to do it anyway, but soon a huge problem became evident. My boss came to my desk, he raised his voice, saying what I had done was ‘unacceptable’ and they ‘don't tolerate this type of thing’, conveniently forgetting that he himself had instructed me to carry out the work, overriding my clear ethical concerns.”

Rebecca says she was stunned. “I had to do something. I resigned the next day. It was the was the first time in my life that I’d resigned before getting another job. And even though it took me a while to find a new job, I’m glad I quit that day.”

“Later I heard that the previous employee in my position had only worked there for four months and the position had been vacant for seven months before that. It took them another year to replace me. Two of my colleagues resigned in the same week I did, meaning three of the 12 employees left at once.”

Rebecca says it affected her very negatively for a long time. “It was a good learning curve although I wouldn't want to repeat it. I'm grateful that I was able to resign and get out of there immediately. Resigning was ultimately very empowering.”

READ MORE: Thinking about changing career in your 30s? Here’s what you need to know

You should be happy at your job and feel like there are both short-term goals and long-term goals for you to strive for.

Mbali was enticed to change companies by a Joburg-based tech business that suggested she would be able to become a manager quickly, which was directly in line with her career goals. She had been working at her new job for three months when she started to suspect that not all was as advertised.

“I started getting the sense that managers talked things up a lot,” she told us, “but there was very little action. During the extensive interview process they told me they didn't have middle managers and they encouraged a flat hierarchy, but when I started working a month later there were new managers in every department.”

“The vice president and chief technical officer had impressed me during the interview process and I was looking forward to working with them, but now I had various layers of management between us and they were not available to or engaged with employees, as previously promised.”

READ MORE: From bookkeeper to partner, how Bongiwe Mbunge climbed the corporate ladder

“I felt undervalued, and misled, and I wasn't learning anything new. They kept hiring middle managers in, and didn’t promote internally, as I had been led to believe.” Mbali says that with every new manager hired she felt like she was going backwards in her career.

“My direct (new) manager said he was very keen on this idea, and seemed supportive,” Mbali told us, “but ultimately after several months of back and forth and receiving no real advancement trajectory or learning opportunities, beyond being given a suggested book reading list, I decided to leave. I felt certain there was no progression for me there, so I took the time and was careful to select a new job where the company had a proven record of employee advancement.”

Looking back now, Mbali says “I still feel quite sad, I believed in the company, their future success and what they did. However, I couldn't stay there sacrificing my personal growth and progression. You should be happy at your job and feel like there are both short-term goals and long-term goals for you to strive for.”

READ MORE: "I work at a company where 92% of my co-workers are black women"

If you’ve just started a new job and are not as happy as you’d hoped, here are three steps you can take:

The first few days and even weeks might be difficult as you settle in and adjust your expectations. Once you’re convinced that this job is not right for you, that you’ve been given a bait-and-switch by recruiters and that you’ll never be happy in the position you’re in, then:

Talk to your immediate manager about your concerns. If you like the company, ask if there are other opportunities for you in the business and suggest how you can work together to improve your overall job satisfaction. If not, then it’s time to:

If the company culture and ethos doesn’t gel with you, or management doesn’t work with you to improve your situation, then it’s ok to leave. While it is easier to find a job while you’re employed, if a toxic workplace is damaging your mental health and a misaligned workload is affecting your expertise and CV, then it’s ok to resign and focus your energy on finding a new opportunity. 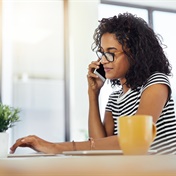