Nuns, including 95-year-old, become TikTok influencers and rake up 384 000 likes for convent videos 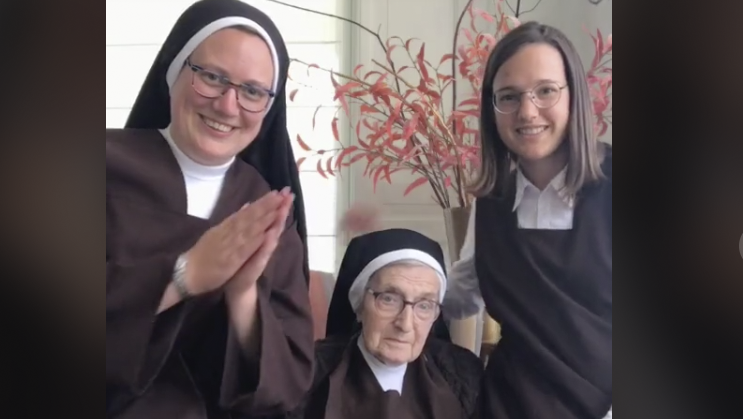 The nuns who are becoming a sensation on TikTok. Photo: Screenshot via TikTok / @carmeldcj

A group of Dutch nuns are becoming influencers on TikTok with a series of videos inspired by social media celebrities.

The latest video by Sister Hannah, who runs the TikTok account from the Casa Carmeli Convent in Vogelenzang, in Noord-Holland, has notched up over 515 000 views. And even though the nun has only made 34 videos so far, she has 29 700 followers and more than 384 000 likes.

Sister Hannah says her inspiration was from seeing how social media influencers spread their messages to the public, and she wanted to do the same with religion.

Sister Hannah lives in the convent with five other nuns who all are supporting her and can be seen on the TikTok videos she uploads. The oldest nun at the convent, a 95-year-old, even joins in the fun and features on some of the videos.

Sister Hannah admittedly "doesn't understand much" about social media but she wanted to use it to spread love and a message about religion.

"I want to show the outside world that we still exist, to speak to people and to get the message. This is a way of getting the message to young people," she says. "We want to be who we are, but we also need to reach young people to show them who we are. We have to be a bit active in the world."

"I saw a video of an influencer showing awful outfits for different occasions. In the convent, we don't have to choose what to wear," the nun says. She said every day it was the same thing, and so the idea for the video where her clothes remained unchanged while the influencer alongside her flips through different garments was born.

Reactions to the video were mixed, ranging from people who are curious about the way she dresses or those who think it's funny to those who object to what she's doing.

READ MORE: Meet Noonoouri - the virtual Instagram influencer who has her eye on some of our favourite local designers

Despite her critics, Sister Hanna has the support of her fellow sisters and says she can live with the criticism. "People sometimes put too much weight on faith and religion, and it's not something to treat lightly, but I think you can touch and reach a lot of people by sending a message with humour," she says.

Are you an influencer or do you know an interesting social media sensation? Tell us here.

We live in a world where facts and fiction get blurred
In times of uncertainty you need journalism you can trust. For 14 free days, you can have access to a world of in-depth analyses, investigative journalism, top opinions and a range of features. Journalism strengthens democracy. Invest in the future today. Thereafter you will be billed R75 per month. You can cancel anytime and if you cancel within 14 days you won't be billed.
Subscribe to News24
Related Links
3 influencers who’ve braided their own hair during lockdown – and how you can too
PICS: Stylish dog owner wears matching wardrobe with her influencer pooch that's worked with Spotify
Black women influencers get paid far less than their white counterparts, experts say
Next on Life
'I bought 10 cars in 4 years then lost them all and used taxis. But I'm rebuilding my business'