Office romances: do they ever work out? 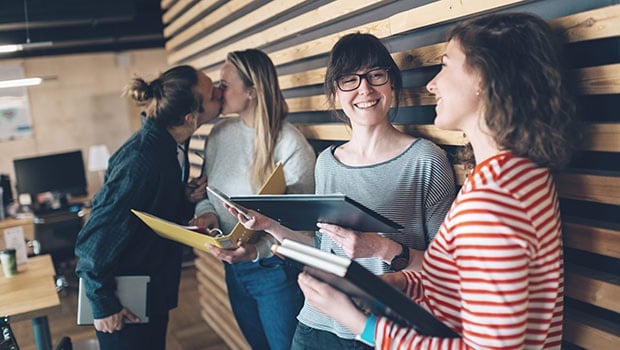 Romance in the workplace

Working environments are a minefield we all have to learn to navigate.

We spend the majority of our time in the office, which means the biggest relationships we form are often the ones we form at work. But relationships (platonic or not) bring with them office politics that may have all manner of ramifications.

Still, you can’t really help who you fall for – and frankly, while I know that there are a lot of cons associated with love blossoming at work – I do think that it’s not necessarily all doom and gloom. And I do know some happy stories.

In fact, when I reached out to some folk on social media earlier this week, I received an overwhelming amount of them that ended in happily-ever-afters and are still going strong to this day.

More so than the negative stories (in fact, if you had a bad experience, share your experience with us and tell us whether or not you’d try it again – we’d love to hear from you).

READ MORE: You need to stop being so loyal to your job

We worked on different magazines at a media company, and met by being representatives on an IT steering committee. We kind of skirted around one another, until he broke off a seven year relationship.

I was involved with someone, but the two of us spent about 2 months getting to know one another properly - at work and out for coffees etc. So - we were in the same company but didn't actually work together although our relationship caused quite a stir when it all came together!

After those first two months, we started dating properly - and everything went quickly after that. I moved in, we got engaged after six months, and married nine months after that.

Another reader says her office romance ended up in a happily ever after scenario, but that she’d generally advise against the idea.

Happily married to mine and currently expecting our first baby, but I think more often than not it’s a bad idea! It worked for me but I’d generally advise friends against it!

Richard and his wife are still going strong and are running their business together.

Met my wife 17 years ago within a corporate working environment.. been married now for 13 years and have worked together in our own business for all of that....

Gaelyn and her partner have now been married for seven years

We did! We met in 2004 when we were working as paramedics, he was my senior and I was just starting out. We’ve been happily married 7 years now!

Another reader, Jillian* told us that she met her partner Garth* when their CEO organised work drinks to meet a number of the new recent hires. They hit it off immediately and spent most of the night chatting.

However, both were in relationships at a time, there was a significant age gap and he was from another country – Jillian didn’t think much would come of it.

“Maybe it had something to do with the fact that we were both single now? Maybe we were suddenly in closer physical proximity? Either way, one day I realised how tall he was. A few days later I saw that his eyes were an unusual navy blue. Suddenly he seemed to have a lot more reasons to come and talk to me about work even though we weren’t in the same department. I inexplicably developed an insatiable appetite for tea where we would flirt over the brewing of cup after cup. I began to get up early to plan my outfits and do makeup before work instead of just throwing the first best thing over my head and haphazardly applying mascara in the car. We both began dreading weekends and looking forward to Mondays.”

Was she worried about how this would impact on the workplace environment?

Of course I was worried about embarking on an office romance. What if it doesn’t work out and I still have to see him every day? What if people think I am unprofessional? What if, what if? In the end, we didn’t have a choice really. The more time we spent together the clearer it became that we couldn’t stay away if we wanted to. Today we are happily married and although we don’t work together anymore, neither of us will ever forget what it feels like when a well-timed elevator ride is the highlight of your day. Of course there were those who weren’t completely against it but still feel decidedly ambivalent about it.

READ MORE: Is the world really getting better at paid parental leave?

While I’m not averse to the idea of dating someone at work, the more cynical side of me can’t help but wonder what happens when it could blow up in my face.

Can’t say I would have done it as it was frowned upon in my first place of employment and one of you had to resign. BUT in my current job an old boss was involved with a colleague in another dept, they are still married more than 7 years later and as far as I am aware happily so

Navigating a post-romance office environment – particularly if the break-up was acrimonious – sounds nothing short of hellish to me.

I wouldn't, at least not in the same department. But I know of three relationships that have worked, at least so far.
1. Small company, all one office, and they now live together but the woman has moved to another company.
...

2. A director brought his fiancee in to work for him as a manager. He LINE MANAGED her. We were not impressed at all.
3. Two people in my current office work in different departments. They're always winning costume competitions. She earns sig. more and he's supportive af.

Of course there are also those who said they wouldn’t and at least one person who said he’d never do it again because it went horribly wrong and could have had serious repercussions in terms of jeopardising his career.

WATCH: Stages of an Office Romance

And herein also lies the crux of the matter.

What happens when there’s a potential conflict of interests? And can companies actually prohibit any romance between employees?

We chatted to 24.com’s divisional HR manager, Jeannine Scheltens who provided us with a little insight into policies surrounding the issue.

Did your office romance have a happy ending? Or was it disastrous? Share your stories with us and we could feature in a follow up piece on W24.

We live in a world where facts and fiction get blurred
In times of uncertainty you need journalism you can trust. For 14 free days, you can have access to a world of in-depth analyses, investigative journalism, top opinions and a range of features. Journalism strengthens democracy. Invest in the future today. Thereafter you will be billed R75 per month. You can cancel anytime and if you cancel within 14 days you won't be billed.
Subscribe to News24
Related Links
The pettiest office email responses
What to do if your workplace environment is toxic and you can’t leave
Watch what you share on social media - it could cost you your job
Next on W24
'I bought 10 cars in 4 years then lost them all and used taxis. But I'm rebuilding my business'