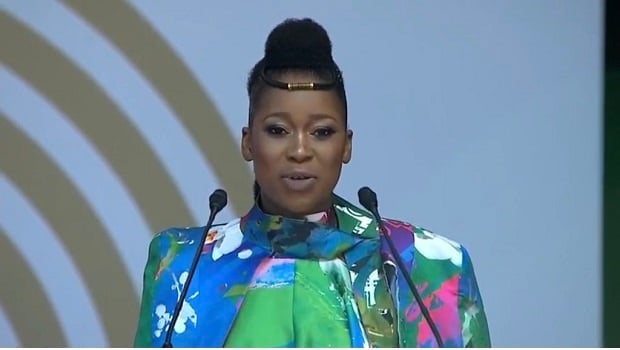 In a matter of two days, Busisiwe Mkhumbuzi represented and inspired many young women as the programme director and host of the 16th annual Nelson Mandela Lecture, which took place on 17 July 2018, and as one of the key speakers at a women's power summit hosted in celebration of Madiba's centenary. We got to speak to her about the things that matter to her the most, and about her role as a black woman in South Africa.

The other day at the @marieclaire_sa #MCPowerSummit2018. I had the opportunity to speak on the youth panel alongside two teens I work with @TshimongSA.

I left feeling so inspired about the future of women in South Africa.
WE ARE IT! #Mandela100

I took one gaze at this picture and I couldn't hold back the joy. You are such an incredible force @BusiMkhumbuzi. One whose force is to be reckon with. You apply yourself to your utmost best and that is one characteristic I'll forever learn from you. Rise! ????#MandelaLecture pic.twitter.com/UU05RTon82

From her teenage years, Busi has always been passionate about granting young people, particularly girls, opportunities for them to use their voices. At the age of 15, Busi joined the global initiative, V-Girls, and created waves around the issues of teenage girls in South Africa and around the globe. "One of the most incredible things that we did while we were doing V-Girls was that we organised a protest in Johannesburg CBD, where we wore short skirts made out of recycled material," Busi recalls.

"Regardless of how old we are, we need to make sure that we’re pulling girls from as young as young as seven years old into the next phase of their lives the way that we have been pulled by other women – that’s the only way we can ensure that we become a magnified energy, a bigger force than what we are right now."

"It was the most incredible thing: a large group of teenagers, singing and marching through the streets of Joburg, and chanting that we wanted police to make the country safer for us," she says. People were so inspired by the march and the initiative, that she was later invited to do a TEDxWomen talk in New York and from then the V-girls club grew and became established in more countries all over the world.

Now at 23, Busi is still relentless in creating positive spaces for the young people to find their voices and to use them. She is the director of Tshimong, an organisation that seeks to empower young people and to strengthen their leadership while helping them find their voices. She runs this organisation with her fiancé, Thami Pooe, and their close friend, Bongani Masilela.

The point of the work she does, as she explained, is to help others in the same way that the women in her life helped her get to where she is now. "I don’t just do it for the sake of doing work or for the sake of making money. I build personal relationships with every single girl in our program; I know her by name, saved her number, and she knows she can contact me when she needs me," Busi says.

"If I can make it possible for another woman to be somewhere else in their life, to even be greater than me, that’s what I’m going to do," she explains, and this is something she believes all of us can do. "Regardless of how old we are, we need to make sure that we’re pulling girls from as young as seven years old into the next phase of their lives the way that we have been pulled by other women – that’s the only way we can ensure that we become a magnified energy, a bigger force than what we are right now."

READ MORE: Snaps and claps at a powerful women's summit

Like every other woman out there, Busi often faces challenges in her field of work, but this only motivates her to accomplish her dreams and to see her vision realised. She expresses how being pregnant has been challenging to her because of how she needs to work twice as hard to prove that she is capable. At the Mandela Lecture, she saw her pregnancy as an opportunity to acknowledge not only black women and black youth, but to represent black mothers as well.

For Busi, representation is important, and the fact that she was a part of the Mandela Lecture and the Power Summit supports her vision of seeing young women's voices acknowledged and heard.

"Whether you’ve achieved your goals or not; whether you are struggling with something in your life or whether you’re flourishing; whether you’re in education, or you’re at work, or you’re an entrepreneur, you have a valid voice," says Busi. "And that voice can only be taken seriously once you believe that it’s powerful."

"Regardless of the fact that everything in your environment is pushing back against you, you need to be excited about your future, your talent and your potential."

We asked Busi to share a few other things about herself with us:

Which three women who inspire you the most?

Oprah Winfrey, Khanyi Dhlomo, and Michelle Obama. Michelle is a good reminder to me that I shouldn’t be in the shadows; that marriage and motherhood don’t mean that I should be in the shadows. Khanyi and Oprah inspire me because of how they own the work that they do and how they own their voices. I think it’s something every black woman should aspire to: once you begin to own your work and become really entrepreneurial about the things you believe in, success becomes amplified.

What are some of the things people don't know about you?

What advice would you give to young women who aspire to achieve their goals as you have done?

The key is to be optimistic. I know when you say something like that, it sounds shallow and weird. But I truly mean optimism because I think that things that we are going through - the inflation, the fuel prices, the political instability, the increasing rape stats, everything in the country - tell us that we have nothing to be excited about; that we have nothing to be optimistic about. But being optimistic in that kind of environment is a revolutionary statement.

"You have a valid voice, and that voice can only be taken seriously once you believe that it’s powerful."

Regardless of the fact that everything in your environment is pushing back against you, you need to be excited about your future, your talent and your potential. We have to have that mind set or else you will be knocked down and pushed out of the game by every single thing that happens to you. As women, we cannot afford to be vulnerable to the things that happen to us.

We can’t get out of the game every time we’re intimidated by something – every time we’re broke or we’re at the receiving end of any kind of oppression or violence. We need to be able to say 'This is happening, but I’m optimistic and I’m excited about the future'. And that’s what’s going to get a lot of us through - that’s what got me through when I was depressed in varsity. We need to work through our depression, our anxiety and our fears, and we need to be exceptionally excited about our lives and about the future.

We live in a world where facts and fiction get blurred
In times of uncertainty you need journalism you can trust. For only R75 per month, you have access to a world of in-depth analyses, investigative journalism, top opinions and a range of features. Journalism strengthens democracy. Invest in the future today.
Subscribe to News24
Related Links
Can we celebrate Kylie Jenner’s success and still point out that she’s not self-made?
4 celeb women who've made amazing career comebacks
WATCH: Tunis elects its first female mayor
Next on W24
These are some of the fastest ways people have failed a job interview - don't let it be you