We have such a love/hate relationship with celebrities. We’re quick to deride, mock and verbally eviscerate them when they make mistakes, but we’re scant on the praise when they do good.

And we love to question their motives and accuse them of doing any good deed for publicity.

But here’s the thing – if getting some lovely PR while they do something good for someone in need, why not just acknowledged their generosity?

What's up with this idea that charity should be some kind of activity to be done in secret?

We see far too few stories that have happy endings, so celebrities who go out of their way to help either their fans or other people in need is something that’s just so ridiculously uplifting, that I think they really need to be celebrated.

Side note: Of course I know there are lots of people who aren’t celebs who do good (and if you know someone who does and think we should give them a shout out – tell us about them here), but today we’re celebrating those icons who are giving back by paying it forward. 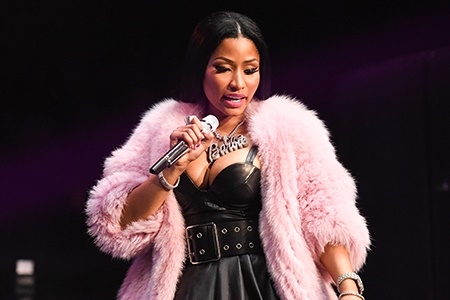 Some time ago Nicki Minaj nearly broke the internet with her generosity.

The rapper, who is known for her generosity as well as being a strong advocate for education and empowering women, recently surprised her fans by offering to pay for their tuition, provided that they had the grades to back it up.

According to Buzzfeed, her good deed actually stemmed from another one. She was in the middle of hosting a competition for some lucky fans to fly out, meet and hang out with her at the Billboard Awards.

Responding to the tweet about the competition, one user asked if she could pay his tuition fees, and in response, she not only offered to pay his fees, but proceeded to set up a competition where she offered to pay any student’s outstanding debts – as long as they showed just how serious they were about their studies.

Her generosity doesn’t end there though – Nicki, according to Buzzfeed, has also been sending money to a small village in India, helping them to establish a computer centre, a reading programme and water wells.

It’s clear that Nicki’s heart is totally in the right place – and it’s so great to see her use her privilege to help so many people in need.

Mam'Rosie was named Shoprite's Woman of the The Year in 2011. This year out of 75 000 entries WORLDWIDE, she has been nominated in The prestigious 'CNN Heroes' ... She runs Baphumelele Children's Home for orphaned HIV/AIDS kids, an EduCareCentre, Hospice Home as well as a Child-headed Homes Programme (which is so dear to my heart) I fought back so many emotions today. Being reminded of the path that God has walked me through as well as where He has placed me. Raising a child born with HIV/AIDS along with my grandmother was no easy feat but seeing her grow and become a young adult is honestly God's miracle. So today, I was blessed. By Mam'Rosie's LOVE, LIGHT, SPIRIT and HUMANITY. Thank you to Shoprite for being part of this journey. #YellowPacketChallenge

On the local front, our celebs are clearly as generous as their international counterparts.

Take the gorgeous and phenomenally talented actress Nomzamo Mbatha, who has not only lent a helping hand to charity initiatives, but she’s dipped into her own pockets and donated more than R60 000 towards Shoprite’s #ShareForGood.

According to Channel24, the charity drive aimed to deliver buckets of food packets to those in need and saw Nomzamo partnering with the Department of Social Development in Kwa Mashu in aid of the project.

Beautiful, generous and kind? We couldn’t love Nomzamo more if we tried.

Another local celeb whose heart lies in the right place.

Not only is the all-round talented beauty a big believer in empowering those who seek to further their education, but she’s gone out of her way to put her money where her mouth is raising money for charity and helping fans in need.

She’s also given away bursaries to students and hosted celebratory lunches in which she has spent time with those students and spoilt them with gifts.

We love it when our local celebs are all about empowering the youth – especially when it comes to education. All the cheers for Bonang! Did you know that the bestselling author actually fell off Forbes’ list of billionaires back in 2012 because she donated so much money to charity? It's estimated that she's given approximately $160 million (more than R2 billion) in that year alone.

She’s earned more money from the sales of Harry Potter and the Cursed Child and Fantastic Beasts And Where To Find Them since, but the author’s generosity and need to give back has never once abated.

According to Scotsman.com, she’s set up Volant, a charitable trust aimed at supporting women and focuses on alleviating social deprivation particularly amongst children and young people at risk.

She’s also founded Lumos, a charity aimed at protecting and transforming the lives of children who have been institutionalised. Some of the royalties of her book sales have also been donated in aid of Lumos and other charities.

We’ve got no doubt that the spirit of her generosity will continue for as long as she’s able to give.

The kickass rapper has been using his success for a lot of good things, but the one that really got people’s attention is when he donated $1 million (over R 13 million) to Chicago schools, following a frustrating interview with Illinois governor Bruce Ruener about funding to schools in the area.

According to CNN, the rapper was frustrated with the lack of clear cut answers about the issues discussed and decided to not only donate that amount to the schools of Chicago, but also backed that up and said that for every $100 000 (over R1.3 million) donated, his charity would add $10 000 (over R130 000).

If that’s not commitment to bettering your community, then I don’t know what is.

Who are some of your favourite charitable (local and international) celebrities?

We live in a world where facts and fiction get blurred
In times of uncertainty you need journalism you can trust. For 14 free days, you can have access to a world of in-depth analyses, investigative journalism, top opinions and a range of features. Journalism strengthens democracy. Invest in the future today. Thereafter you will be billed R75 per month. You can cancel anytime and if you cancel within 14 days you won't be billed.
Subscribe to News24
Related Links
Kim K’s Snapchat - a perfect example of how privilege blinds to the struggle of minimum wage workers
5 of the best rags to riches stories ever
8 ridiculously wealthy princesses who never have to worry about 'making it till payday'
Next on W24
From cooking once a week to renegotiating premiums - expert tips on how to ease cash concerns