Spent too much money living your best life? Here's how to right the financial wrongs you made in your 20s Do you remember that moment when your first pay cheque landed in your hand or in your bank account? The feeling of excitement and independence! If you’re anything like me that first pay cheque didn’t last long: all those things I wanted but my parents wouldn’t buy for me were finally mine. New lipstick, driving lessons, a couple of gin and tonics in town and it was soon gone. The early feeling of financial freedom.

It’s incredible how liberating it is not to have to ask someone’s permission to buy something; whether it’s something you need, something you want, or a combination of the two.

I spent most of my 20s living my best life. I wase lucky enough to work in four countries on three continents, travelling at the weekends, spending my time and money enjoying experiences. I promised my dad I would start thinking about saving towards retirement at 24, but 24 became 26, which soon became 30. Feasibly, I could have ended up being 60, with a lot of great holiday snaps, and even better stories, but nothing for treating my grandkids… in fact, in all probability, I would be relying on them to support me.

READ MORE: A handy step-by-step guide to help you get over your fear of the stock market

The living optimist in me refused to be worried. I have worked in some of the world’s fastest growing start-ups (Groupon & Foodpanda - similar to Uber) and I have seen many of my contemporaries go on to found incredibly successful businesses, and retire comfortably before the age of 35. Ever the dreamer, I told myself I didn’t need to worry about retirement – I was just one great idea from a billion dollar business empire and the financial security that would come with it.

Fast forward to January 2017 when I joined 10X Investments. Now I am head of retail at the company, but back then, I’m an economics grad from the London School of Economics, and I realised that I didn’t know the first thing about investing (so there is absolutely no shame if you’re in the same position). Firstly, the money I had saved was sitting in cash. Secondly, I had no retirement savings. (That is excluding the long-lost pension fund I had with Groupon, where I contributed the minimum allowed, which was the grand total of 1% of my salary. Yes, I hold my head in shame).

There were two seminal moments that changed the course of my finances for ever:

1. I started to see saving for retirement as a (very tax efficient) insurance policy. Sure, I might become a successful entrepreneur or a hotshot Bitcoin trader or property magnate), but, then again, I might not. Let’s face it, the latter is probably more realistic. I quickly increased my provident fund contributions.

2. I realised that keeping my money in the bank is about as smart as hiding it under the mattress. Sure it’s a bit harder to steal, but it’s just as likely to grow. Even worse if you’re living in a country like South Africa with inflation rates of 5%+: you’re actively losing money if it’s not invested properly. I started to set aside a chunk of my earnings, money that I’m happy to save for 5+ years, and moved it into a high equity, low fee index fund.

READ MORE: Women are the world’s most powerful purchasers, but here’s what’s tripping us up

Above and beyond these two moments of rationality, my change in behaviour was driven by a more emotional realisation. What if, after 45 years of financial independence, I had to ask someone for permission to buy a lipstick again? Or for a new pair of trousers? Or to pay my rent? I don’t miss the days of calling my dad to help me out with my rent (luckily something I haven’t done since varsity) because I had mis-budgeted. I don’t want to be calling my kids, or worse, my grandkids when I’m retired. I don’t want to hit ATM Day Zero.

I realised that I had some catching up do, having missed out on some of the essentials, such as start saving early, save consistently, and preserve your savings when you change jobs. Now, I am paying extra attention to the rules I can still apply, like keep fees low, and choose a well diversified high equity fund that uses index tracking to earn the return of the market as a whole.

So I have started saving for retirement. In two years I have pulled myself back on track. (If you are unsure how to calculate this, there are a few easy to use calculators like Fin24's, 10X Investments' and financial institutions like Old Mutual, Sanlam and Discovery). When I change jobs I won’t be cashing out my provident fund to start a business, or to pay off my bond. That money is for Future Emma - and spending it now is the equivalent of stealing from my future. 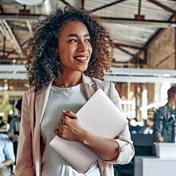