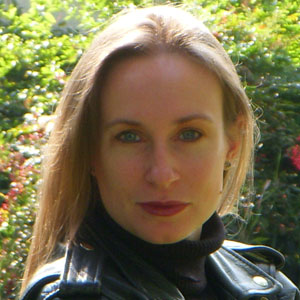 She prefers demons to vampires, would rather write gruesome than love-some and revels in creating creepy, twisted and demented characters.

I wasn't sure what I signed myself up for when I first read Shadows, but the disturbing storyline actually proved to be a darkly entertaining read that kept me riveted right up until the end (You can read my review of the book here).

Here's what she's had to say when I asked her a few questions.

1. For people who have yet to read the book, can you give us an idea of what they can expect?

2. I've described Shadows as being dark, twisted and creepy – ingredients which definitely make for a great horror fiction read.  Can you tell us a little about how your book was born?

Strangely enough, it was born out of a nightmare. The very first scene in the book was based on a very bad dream I had. It was one of those dreams that I woke up sweaty and with a heart palpitating from fright. In order to exorcise it, I wrote it down and Shadows grew from there.

3. Shadows is certainly not a very easy book to read and for me, as a reader who doesn't naturally gravitate towards horror fiction, there were many times I literally flinched my way through the book. Is it easy for you to write such gory scenes?

There were times when I, myself flinched my way through writing it. Violent and gory scenes are a challenge to write because they need to be more realistic and believable in order for your reader to buy what's going on. Writing those scenes took a while and they also took a lot of rewriting.

I will admit that writing dark and twisted does come more naturally than, say writing romantic and lovey-dovey.

4. One of the most complex and fascinating characters in your book is the demon Jack. It's rather strange because he is the character one would expect to hate the most, yet for me, this was not the case. How would you describe him?

Jack is one of those character's that are a lot of fun to write. He can say and do anything. He's also the ultimate boogeyman.

Being a demon he can personify all our fears, but because demons also come from the human psyche, he can have that element of humanity that ultimately still makes him likeable.

5 . Besides Jack, which character's story was the most challenging to write and why?

Carol's was definitely the most challenging. She's so damaged and the abuse that she's suffered and the results of that abuse made her very difficult to write.

6. You seem to have a fascination with all things supernatural, most notably in demons. Where did this interest stem from?

I blame my Catholic upbringing. A lot of religions and cultures have demons, not just in the west. Every culture across the globe believes in some form of demonic element, which I find fascinating. What is it about demons that has the whole world frightened?

Werewolves are only scary once a month and you can shoot them; and zombies are … well … they're kind of dumb and slow. But demons, on the other hand, can't be killed, they can take on any form and they're as scary as our deepest, darkest imaginings.

7. What were the biggest stumbling blocks you faced during your road to publication and what were the most life-changing lessons that you learnt from these obstacles?

I think the most important thing I learnt was to never give up. In publishing you have to have a thick skin and be pretty determined.

8. What do you think are the most common misconceptions that people have about you as a horror writer (besides the fact that they tend to be surprised when they discover that you're actually rather nice)?

Perceptions people have are always rather interesting. The usual reaction is “You're way too sweet to write horror!” I've asked people what they think a horror writer is supposed to look or be like and they then give me a blank look and shrug.

After a little prodding it comes out that I'm either supposed to be hard drinking and drug addicted like Stephen King once was or that I need to be tattooed and pierced all over. It seems that my not being Goth is a bit of a shocker.

9. South African horror fiction is sadly not all that well-read amongst South Africans. Yet, we know that there are hoards of new writing talent within this genre. Can you recommend a few horror reads for fans of this genre?

Genre fiction in South Africa, in general, is still very new and growing. There's S.L. Grey's The Mall which is brilliant and there's also Lily Herne's Deadlands which is a fantastic YA horror novel.

Now that's a tough one. I wouldn't mind seeing Jack and House get into a tussle. House's genius and sarcastic wit matched against Jack's evil could be a lot of fun.

Have you read this book yet? What did you think of it?