'I'm in love with Edward Cullen' I am never going to read my daughters fairytales. Why, you may ask?

Well, my reasoning behind this is quite simple: I believe that the reason I am such a hopeless romantic is because of fairytales.

Let me explain, I remember going to bed at night and my grandmother reading to me. Cinderella, Snow White, The Princess and the Pea, and so forth. I remember lying looking at her wide eyed, the suspense of the story enthralling me.

I also remember the sense of joy and peace that washed over me when the princess finally got to live happily ever after with her prince. I used to dream about the fairytales at night. I used to see myself all grown up, wearing a lovely pink satin gown, being in my prince's arms and breathlessly waiting for our first kiss.

I grew up in a disillusioned world. A world where I was patiently waiting for my prince to arrive. Well, needless to say that never happened. None of my boyfriend's ever quite made the scratch of my handsome prince I had envisioned. In my fairytale there was no arguing, there was no jealousy or deception, just "happily ever after".

Don't get me wrong, I love my husband, but, as all of us, he has flaws, and somehow I never factored in the real world when I was daydreaming.

There were no bond repayments, no cellphone bills, no car troubles. These were factors that I had subconsciously eluded in my "happily ever after".

After about a year of being married I dropped my silly childhood dreams of life being perfect and tried to embrace the "real life" as we live it every day.

But then it happened...nothing could prepare me for this...I watched the movie Twilight. I was numb right through, watching while my kids were sleeping. Since then I have watched it a dozen times, bought all the books and have read them twice.

My heart swelled so much in my chest that it felt that I couldn't breathe. Why? Why was I so madly and insanely "in love" with Edward Cullen? Why, after so many years of living "the real life" had I suddenly fallen back into a hopeless and pathetic romantic at the age of 30?

I have a couple of theories on this:

Firstly, I have never seen a man so magnificent. Not the actor himself, but the role that he is playing. The perfect flawless white skin, the alluring mouth hiding the secrets that I wanted to plummet myself into. There is no mistaking that this "creature" was what I had been looking for all my life. I was drawn to this being with such a force of passion that it made my head spin.

And thirdly, no prince could love me so intensely like a vampire. Reading Breaking Dawn, I was hopelessly out of breath when Edward and Bella made love at intervals during the book. But it wasn't Bella that I saw in my head, it was me.

It was me that gave birth to his perfect daughter and it was me that turned into a raging beauty after feeling his venom burn through my veins. I was immortal, frozen in time.

I would never age, which is what most women wish. I would get to live and love forever, which I am not sure I want in real life, but it makes sense in the world of Edward Cullen.

How could I not want to be with him forever?

How could I not want to rip his clothes from his body and ravish him every night? How could I not want his cool hands touching me every night, the whole night, without tiring? I want to spend every waking moment (which is 24 hours a day for a vampire) with him. The mere thought of his face close to mine, barely touching, smelling his breath...it sent me spiraling into a world that I had forgotten so long ago...the world of make believe.

Now, some might read this and think that I am pathetic, but I am sure most women can remember the feeling of utter bliss as a child when the happy ending arrived.

We are still like that when watching romance movies. We love the passion. We love the love itself. But because I am a very intense human being and always have been, I find myself wondering if vampires really do exist?

No, not if they do exist, if good vampires exist. Like Edward Cullen and his family. Call me crazy, but I do believe in the supernatural. I do believe in fairies and gnomes and vampires and werewolves. I have a very vivid imagination.

In my dreams I feel the passion of our first kiss and the disappointment as he pulls away, afraid he will hurt me.

And I hate it. I hate these feelings of utter hopelessness when my alarm goes off in the morning and he is torn from my vision. I hate having to face the real world without my Edward. Without my soul mate, my immortal. My days seem empty besides for the screensaver of Edward Cullen on my PC.

Harsh, you might think. I don’t think so. I want them to know that men are just as real as they are, filled with different emotions and flaws and that every day life is sometimes hard. That makes sense to me. That is how it should be.

I don't want my daughters lying in bed at night waking up feverishly with the disappointment that "their" Edward Cullen does not exist, because I will be living my life with my soul belonging to "my' Edward that is only a dream, a far away ache that could never be...and I am bleeding.

Can you relate to her obsession? Share your thoughts in the box below.

We live in a world where facts and fiction get blurred
In times of uncertainty you need journalism you can trust. For only R75 per month, you have access to a world of in-depth analyses, investigative journalism, top opinions and a range of features. Journalism strengthens democracy. Invest in the future today.
Subscribe to News24
Related Links
Twilight book review
Next on W24
Golden Globes 2016: best and worst dressed 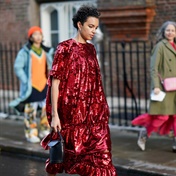