Not That Bad: Dispatches from Rape Culture edited by Roxane Gay

The author whose memoir Hunger chronicles her own painful experiences with sexual assault, is joined by contributors such as Ally Sheedy and Gabrielle Union to address issues of violence against women, gaslighting, being shamed and victim-blamed and exploring the prevalent rape pandemic within the refugee crisis.

In a world where the Weinsteins of the world have gotten away with sexual harassment for too long, Not That Bad is a book that should be on everyone’s must-read lists.

The book is available from the 1st May from HarperCollins publishers. 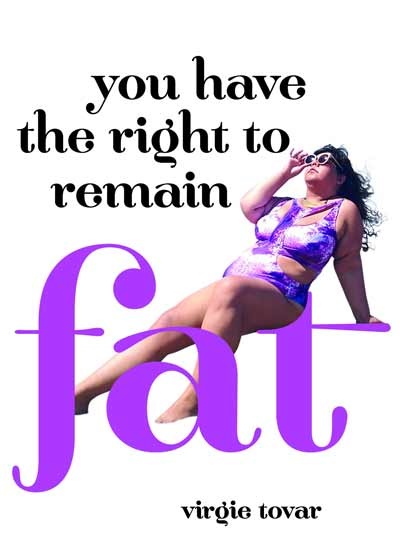 You Have the Right to Remain Fat by Virgie Tovar

In You have the Right to Remain Fat, Virgie tackles fatphobia and talks about unlearning everything that taught her to hate her body.

A must-read for all the awesome fat girls but also for those people in your life who really needs to hear some hard truths about their problematic and shame-y behaviour.

Published on the 14th August 2018 by The Feminist Press It's Only Blood: Shattering the Taboo of Menstruation by Anna Dahlqvist, Alice Olsson

The subject of periods has been one that’s been that’s always been somewhat of a forbidden topic. We’ve certainly made strides over the last few years when it comes to frank discussions about menstruation but many people still view it as a dirty bodily function and topic best not talked about at all.

Anna Dahlqvist’s It’s Only Blood takes a look at how and women around the world are dismantling the taboos and shame around menstruation and delves into why this is such a key factor in the fight for women’s rights.

Definitely an important book to read.

Published on the 15th May by Zed Books Tomorrow Will Be Different: Love, Loss, and the Fight for Trans Equality by Sarah McBride

Sarah McBride, the current National Press Secretary at the Human Rights Campaign, has a story to share that’s universal and relatable to anyone who has ever struggled with their gender identity and finding the freedom to express themselves for who they are, and not who the world wants them to be.

In her memoir, she chronicles her journey of coming out and tackles topics like access to healthcare, bathroom access and what it means to be openly transgender in a world that constantly targets and harasses the transgender community. When They Call You a Terrorist: A Black Lives Matter Memoir by Patrisse Khan-Cullors, Asha Bandele

I was having an interesting discussion with a friend who told me that one of her neighbours has always thought that Nelson Mandela was a terrorist.

It immediately got us thinking about how many people find it easier to defend a systematic structure of racism than it is to consider the humanity of those who are fighting against a wholly oppressive system.

I mean better the oppressive system then the freedom fighter, eh?

In her memoir, Patrisse Kahn-Cullors, one of the co-founders of the Black Lives Matter movement asks the readers to remember why the marginalised protest, to acknowledge the vulnerability and threat on their lives and to listen and understand that the fight is one for survival and a place beside everyone else, not one that’s rooted in the very rules of the foundation that stripped them of their freedoms in the first place.

Stay tuned for our fiction (both local and international) segment.

We live in a world where facts and fiction get blurred
In times of uncertainty you need journalism you can trust. For 14 free days, you can have access to a world of in-depth analyses, investigative journalism, top opinions and a range of features. Journalism strengthens democracy. Invest in the future today. Thereafter you will be billed R75 per month. You can cancel anytime and if you cancel within 14 days you won't be billed.
Subscribe to News24
Related Links
The best books of 2017
5 ways to get reluctant readers to pick up a book
4 ways we can keep our local libraries from being closed down
Next on W24
EXCERPT | Transitioning Later in Life: Loss/gain of male privilege