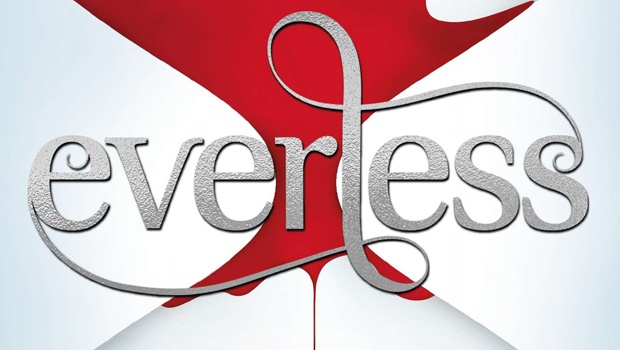 Everless by Sara Holland (first published in 2018 by Orchard Books)

In the land of Sempera, the main currency is time. Time that’s controlled by the wealthy and passed on from the blood of the poor in order to ensure the safety of the country’s citizens.

In the age of alchemy and sorcery, blood and iron have been melded together to measure the years, hours and days of someone’s life.

Blood is extracted from the poor, moulded into blood iron coins and consumed in tea to extend the life of the rich, while the poor are forced to have their blood withdrawn (and thereby time taken from their lifespan) in order to pay for basics such as their rent, and the protection of the wealthy royals from Everless.

Jules and her father are struggling to make ends meet and are behind on rent. In order for Jules to prevent her father from draining any more blood, Jules decides to take a job at the Everless estate – home to the wealthy Gerling family – a family Jules has good reason to despise.

But what starts out as a means to save the only family she’s ever known, soon becomes a lot more complicated when she’s confronted with secrets better left unspoken, her childhood friend Roan, whose royal and soon-to-be wed status doesn’t stop her from being attracted to him, and an increasing manifestation of a power that’s should definitely remain hidden..

Sara Holland’s Everless is probably one of the most unique fantasy novels I’ve read to date. The beautifully written novel uses alchemy and sorcery as the backdrop to a novel that’s filled with as much beauty as it’s filled with deceit and treachery.

As a character Jules is resourceful and quite well-rounded. She doesn’t always make sound decisions, but her intentions and her heart is in the right place.

Revisiting the place that was once part of her childhood and led to her and her father’s ruin, she dives headfirst into a situation that forces her to hide her identity and navigate a world where immortality is an easily accessible commodity to the rich.

Once there, she has to hide her growing resentment even while she’s trying to discover the history behind a past she cannot remember and memories that are hers and also aren’t. In time she’ll learn that in the pretty and gilded cage she’s been lured into, the people she wants to trust most, are perhaps the very ones she shouldn’t.

The book starts off at a slow pace, gradually building up to a labyrinth of complicated events that form a puzzle whose twists and turns you won’t see coming.

There’s hints of romance (although it doesn’t form the main part of the story, something I suspect we’ll see more of in the next book) and a dark and fairytale-esque quality to the novel that constantly keeps you guessing as to the motivations of the characters.

Throw in a fearsome queen, strange girls in waiting and history steeped in mythology I hope to see expanded upon more in the next book – and you have a wonderfully intriguing start to a new series that is a unique standout in young adult fantasy fiction.

I can’t wait to see how events unfold next.

Purchase a copy of Everless from Raru.co.za

We live in a world where facts and fiction get blurred
In times of uncertainty you need journalism you can trust. For 14 free days, you can have access to a world of in-depth analyses, investigative journalism, top opinions and a range of features. Journalism strengthens democracy. Invest in the future today. Thereafter you will be billed R75 per month. You can cancel anytime and if you cancel within 14 days you won't be billed.
Subscribe to News24
Related Links
Book review: Hacked: The Eulalie Park Mysteries by Fiona Snyckers
Book Review: The Rules of Magic by Alice Hoffman
Book review: The Truth and Lies of Ella Black by Emily Barr
Next on W24
EXCERPT | Transitioning Later in Life: Loss/gain of male privilege