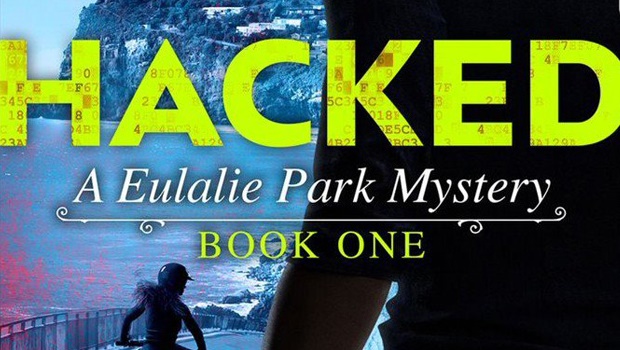 Marcel Faberge is not a popular man. When he turns up dead, there is no shortage of suspects. Unfortunately, one of them is Fleur, the best friend of private investigator, Eulalie Park.

Fleur was last seen threatening Faberge in front of dozens of witnesses. A knife from her coffee shop is the murder weapon.

Will Eulalie be able to prove her friend's innocence before she is arrested for murder by Prince William Island's newest chief of police, Donal Macgregor? In a world where Russian mobsters rub shoulders with crooked racehorse owners and shady businessmen, Eulalie will need all her skills to unravel this mystery.

And so begins the first of an exciting, new series reminiscent of Nancy Drew by South African author, Fiona Snyckers.

When I saw the first book, Hooked, was launched, I was drawn in first by the cover and then by the promise of the unexpected.

Unfortunately, I am notorious for collecting books on my Kindle and didn't get around to reading it right away. This didn't stop me from getting the second and then third books and then beginning a Eulalie binge fest.

Some of the things that really stood of for me with the first two books were:

•    A unique, fictional setting that is as well-rounded as any real place would be.

•    A strong, spunky main character who can handle herself and doesn't need a man to rescue her.

•    A supporting cast of characters who honestly feel like real people.

•    These books would make a great TV show as they feels if they are structured in a similar way with character continuity from one book to the next and opportunities to get to know Eulalie better.

•    There is a touch of romance that doesn't dominate the story and is also interesting to read because of the interactions between two very different people.

Each book in the series offers a stand-alone mystery building on the context from the previous books.

So, you really do need to read them in order! There is also an interesting twist which I am not going to reveal but I can promise makes this series even more fun and compelling!

Both Hacked and Hooked were quick, addictive reads and will be perfect for the upcoming Easter weekend.

The third book, Haunted, is also out and I really do suggest you get all three on your eReader as you will be as eager to keep going as I was. Eulalie is basically Nancy Drew for an older audience and I am loving it.

Purchase a copy of the book from Amazon.com

Read more of Monique’s reviews on her blog

We live in a world where facts and fiction get blurred
In times of uncertainty you need journalism you can trust. For 14 free days, you can have access to a world of in-depth analyses, investigative journalism, top opinions and a range of features. Journalism strengthens democracy. Invest in the future today. Thereafter you will be billed R75 per month. You can cancel anytime and if you cancel within 14 days you won't be billed.
Subscribe to News24
Related Links
How one woman’s book caught a killer who evaded the law for more than 40 years
Book review: The Woman in the Window by A.J. Finn
Book review: Lullaby by Leila Slimani
Next on W24
EXCERPT | Transitioning Later in Life: Loss/gain of male privilege