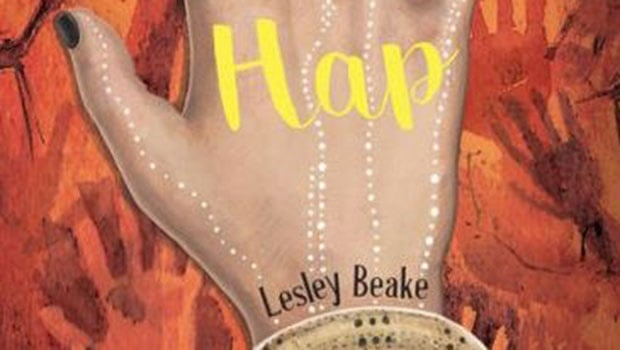 Hap by Lesley Beake (first published in 2017 by Tafelberg)

I'm going to start by saying that Hap by Lesley Beake absolutely deserves gold for the 2017 Sanlam Youth literature Prize. In this tale, we discover the world according to Lucy, 16, who's been packed off by her mum in NYC to go spend a few weeks with her father, Peter, in South Africa.

Peter is busy on a dig on the West Coast, somewhere near Lambert's Bay (that's about all I can find out about the location of Barclay Bay).

It's quite a change from the air-conditioned apartment in the city, but Lucy needs her space. She's recently had something awful happen to her, and needs time and space to remember and deal with the event.

The entire novel seems to exist in a dream-like state – and there's not much that happens beyond Lucy reconciling with her (relatively) absent father, working through her own dark teatime (being rejected by your mother is a terrible thing) and then the events that happen on the dig.

We have a large-ish cast of wonderfully eccentric secondary characters who add interest and some conflict to the narrative. There's a storm. The descriptions of the environment are absolutely gorgeous.

And then there are the sort-of visions that Lucy has about the enigmatic Hap, her counterpart who lived here many thousands of years ago.

I loved the fact that it's left open-ended as to whether Lucy merely had an active imagination or whether she in fact did tap into a distant past.

This is a story about life, and about the connections made between people, and how even though thousands of years separate us from our ancestors, we still have the same needs – to be loved and to endure.

And it's also about connecting to that sense of belonging and being part of the land that has formed our bones.

I enjoyed seeing Lucy gradually unfold – and this very much is a novel about coming to terms with hurt and moving beyond it – a story containing subject matter that is often difficult to write about sensitively. (A hint: Beake nails this, BTW. Much better than many authors I've seen over the past while.)

Hap will stay with me for a long, long time. It might be because I already have a massive interest in archaeology – so having a novel immersed in the day-to-day (and rather unglamorous) doings of archaeologists most certainly worked for me.

Lucy herself may be at times be self-absorbed (but it's understandable why), but her perceptions of the world around her and the people with whom she interacts make for a fully immersive story.

Beake's writing is lyrical and evocative, and I cannot recommend this book enough – whether you are a teen or a teen-at-heart.

Read more of Nerine’s reviews on her book blog.

We live in a world where facts and fiction get blurred
In times of uncertainty you need journalism you can trust. For 14 free days, you can have access to a world of in-depth analyses, investigative journalism, top opinions and a range of features. Journalism strengthens democracy. Invest in the future today. Thereafter you will be billed R75 per month. You can cancel anytime and if you cancel within 14 days you won't be billed.
Subscribe to News24
Related Links
Fiction for non-fiction lovers
What I learned when my mother said: 'I’m tired. I’m not going to cook anymore.'
Love stories for people who don't like reading romance
Next on W24
EXCERPT | Transitioning Later in Life: Loss/gain of male privilege

Get the newsletter
Voting Booth
Do you think it's important to get married in this day and age?
Please select an option Oops! Something went wrong, please try again later.
Yes, it's important in order to create a family unit and for companionship
22% - 516 votes
Not at all. Being single is far more liberating
9% - 221 votes
There is no general answer to this, it's each to their own
49% - 1132 votes
Yes, society still frowns on unmarried people, especially women
1% - 34 votes
It depends on whether you are able to find a compatible partner
18% - 424 votes
Previous Results
Fashion
Rihanna and radical pregnancy fashion – how the Victorians made maternity wear boring