Here’s the problem with saying “I’m so OCD” If I could sum up John Green’s latest book, which focuses on a young teen with severe obsessive compulsive disorder in one sentence then this is what that sentence would be:

Sometimes you don’t win the war but you learn how to navigate the battleground.

I say this because as someone with depression and social anxiety disorder, I’ve been around the bend a few times. I have as many good days as I have bad days and sometimes the one outdoes the other. I hope to win the war some day, but for now, I do what I can to keep going.

John Green is a household name in the young adult genre.

The bestselling author of hits like Paper Towns, Looking for Alaska and The Fault in Our Stars has become renowned for his compelling storytelling and wonderful writing.

He’s also been criticised for creating pretentious and contrived manic pixie girl narratives, which in retrospect I only recognised in The Fault in Our Stars a few years after reading the book.

And even though I do enjoy his work while acknowledging this, it was because of this criticism that I was a bit hesitant to dive in.

Today is World Mental Health Day and to celebrate the global release of John Green’s Turtles All the Way Down, the lovely folk from @penguinbookssouthafrica have kindly sent this wonderful surprise my way. Since the book revolves around a girl with mental health issues, the timing of this book is absolutely perfect. I’m looking forward to reading this one so much. About the book: Sixteen-year-old Aza never intended to pursue the mystery of fugitive billionaire Russell Pickett, but there’s a hundred-thousand-dollar reward at stake and her Best and Most Fearless Friend, Daisy, is eager to investigate. So together, they navigate the short distance and broad divides that separate them from Russell Pickett’s son, Davis. Aza is trying. She is trying to be a good daughter, a good friend, a good student, and maybe even a good detective, while also living within the ever-tightening spiral of her own thoughts. In his long-awaited return, John Green, the acclaimed, award-winning author of Looking for Alaska and The Fault in Our Stars, shares Aza’s story with shattering, unflinching clarity in this brilliant novel of love, resilience, and the power of lifelong friendship. Thanks team @penguinbookssouthafrica You guys are the best!! Cc @kimrudman #books #bookstagram #booksofinstagram #johngreen #turtlesallthewaydown #yafiction #yalit #ilovereading #penguinbooks #bookdragon #booknerdigans #igreads #bookblogger #sareaders

While not perfect (there’s still that element of overly world-weary and weirdly philosophical narrative that doesn’t quite fit in with the voices of some of the characters), Turtles All the Way Down is probably John Green’s most authentic book yet.

It’s also one of the hardest to read because it chronicles the downward spiral of a teen’s struggle with Obsessive Compulsive Disorder (OCD).

Drawing from his own experiences with OCD, Green’s latest book is not just an important exploration of mental health but it’s one that should be read by every person who has ever used the phrase “I’m so OCD or “I’m so depressed.”

To give you a bit of an overview, in Aza Holmes the protagonist of Turtles All the Way Down we encounter a girl who while trying to uncover the mystery to a missing person’s story finds herself battling the raging nightmare of her inner psyche.

The New York Times describes this gut-wrenching read as “a teenager’s mind at war with itself,” because the novel delves into the self-destructive thoughts of a girl who veers between trying to maintain a veneer of normality and giving in to the obsessive self-loathing thoughts and behaviours that leaves her in a never-ending cycle of engaging in patterns she’s helpless to stop or control.

Let’s stop there for a second.

How many of you have been guilty of looking at an image that’s out of place or featured a missing details and allowed the inner perfectionist in you to scream “I’m so OCD?!” Or maybe you were feeling sad and blurted that you’re “so depressed.”

You probably don’t mean any disrespect and no one can deny your right to feeling sad or being bothered, but here’s the thing – and here’s what Turtle All the Ways down reminds us – is that unless you have been diagnosed with these conditions, you have no understanding beyond an intellectual grasp of what it means to be depressed or have OCD beyond the phrases that you’re using. 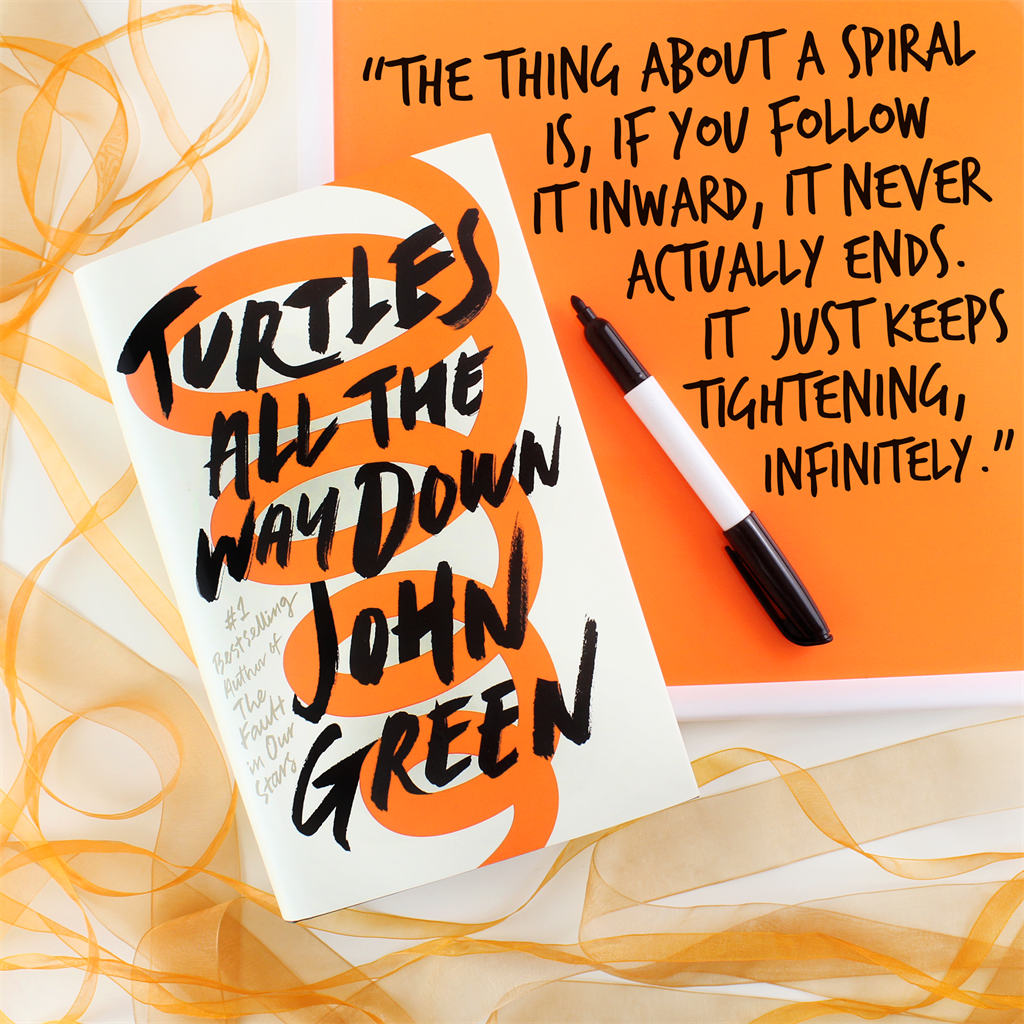 People who have OCD aren’t just compelled to have something look a certain way or do something in a certain pattern that makes sense to them because they’re perfectionist. 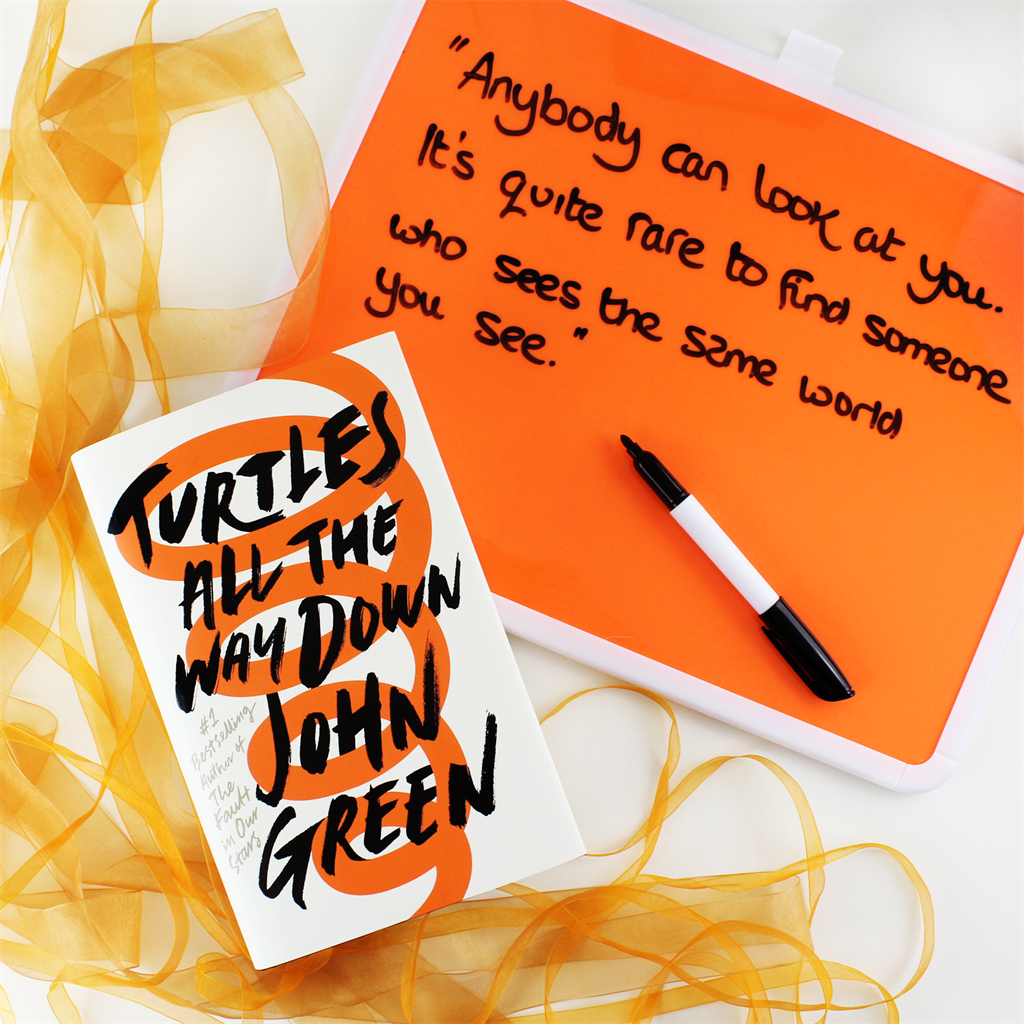 Their anxiety and behavioural patterns are interconnected – Green perfectly demonstrates this in how he describes Aza’s obsession with constantly squeezing her finger to the point of bleeding, using hand sanitizer to clean the wound, covering said wound with a band-aid and repeating the process over and over again to abate her anxiety.

There are lots of ugly truths, but incredibly relatable ones along with incredible nuggets of wisdom. Also positively, the book delves into the benefits of going for therapy while simultaneously talking about the struggle of taking medication.

Even though the plot itself is somewhat lacking (in fact, it serves more as a background feature as the characters’ stories themselves are the shining point of the book), I think the one takeaway you can take from Turtles All the Way Down is this: You don’t get to hijack people’s mental health illness and trivialise their experiences with phrases that are nothing but a means to express your melodrama.

WATCH: John Green reads the first chapter of Turtles All the Way Down.

Purchase a copy of Turtles all the Way Down from Takealot.com

We live in a world where facts and fiction get blurred
In times of uncertainty you need journalism you can trust. For only R75 per month, you have access to a world of in-depth analyses, investigative journalism, top opinions and a range of features. Journalism strengthens democracy. Invest in the future today.
Subscribe to News24
Related Links
4 books that lived up to the hype
Book review: Difficult Women by Roxane Gay
From The Secret Garden to Thirteen Reasons Why, death is getting darker in children’s books
Next on W24
From The Slumflower to Florence Given: why influencer books about feminism seem so similar

Subscribe to newsletters
Voting Booth
After 365 days in lockdown, in what way has your life changed the most?
Please select an option Oops! Something went wrong, please try again later.
Nothing's changed. Everything in my life became stagnant.
25% - 110 votes
I've focused more on making my house/apartment a more comfortable, beautiful place to call home.
11% - 48 votes
I don't think I could ever not work from home again. Remote work has saved me so much money.
16% - 72 votes
I just appreciate the people in my life more and take nothing for granted.
35% - 156 votes
I've developed a healthier relationship with alcohol.
5% - 22 votes
I've had to reconsider my career options after retrenchment.
7% - 33 votes
Previous Results
Fashion
ASOS may be the Beyoncé of e-commerce fashion during the pandemic as its profit...