EXCERPT | 'A bold, unapologetic memoir about abuse, coming-of-age, a woman owning her sexuality' Unsettlingly honest and brutally blunt, Ougat is Shana Fife’s story of survival: of surviving the social conditioning of her Cape Flats upbringing, of surviving sexual violence and depression, and of ultimately escaping a cycle of abuse. Image supplied by Jonathan Ball Publishers

As a young woman, I aspired to be like the unhappy, but married, women in my circle. There were exceptions like fun aunties and independent cousins, but I remember mostly pitying the women who hadn’t been lucky enough to find a man to tame them. From my peripheral viewpoint as a child it seemed that married women looked at single women with a mixture of disgust, pity and jealousy.

Very confusing for my newly emerging sense of self. I had a sponge for a mind and it soaked up every sentiment expressed by the people I was told to look up to or else. Observing from my low angle, I was aware that men and boys were exempt from common decency – and that even though ‘boys will be boys’ and women were nurturers, matured faster and were fixers, men were destined to rule. It made sense, but it didn’t. But it did.

As a child, I was privy to the interesting dynamic between boys and girls and men and women that only Cape Coloured kids will understand. You only need to attend one wedding at a civic centre and see the women anxiously waiting for mediocre, drunk men to ask them to jazz to understand the entirety of heterosexuality in my community.

But like I said, admitting that I was aware of anything above my age level – or expected chastity level – would mean that I was ‘fast and forward’. I preferred to dumb myself down to the point of pretending to be shy about trivial things, rather than let people know I had found my own vagina. And that I thought that they, even at 20 years older than me, were f*****g stupid.

Even as a seven-year-old I noticed the disparities between men and women. But I knew very well I was to keep my observations to myself, no matter how accurate they were. There was a certain way I was to behave, or I would be ‘in the eyes’.

In my very first memory of my extended family in our Woodlands home, my mother’s brothers and sisters and their children are all gathered to celebrate my grandparents’ fiftieth anniversary. My cousin Louis and I were the youngest children of my ma’s daughters.

Apparently, that was significant to these old farts, so it was our duty – our honour – to present my grandparents with their gift: a box-shaped colour TV. Everyone was so excited at the idea of presenting this monstrosity to them. 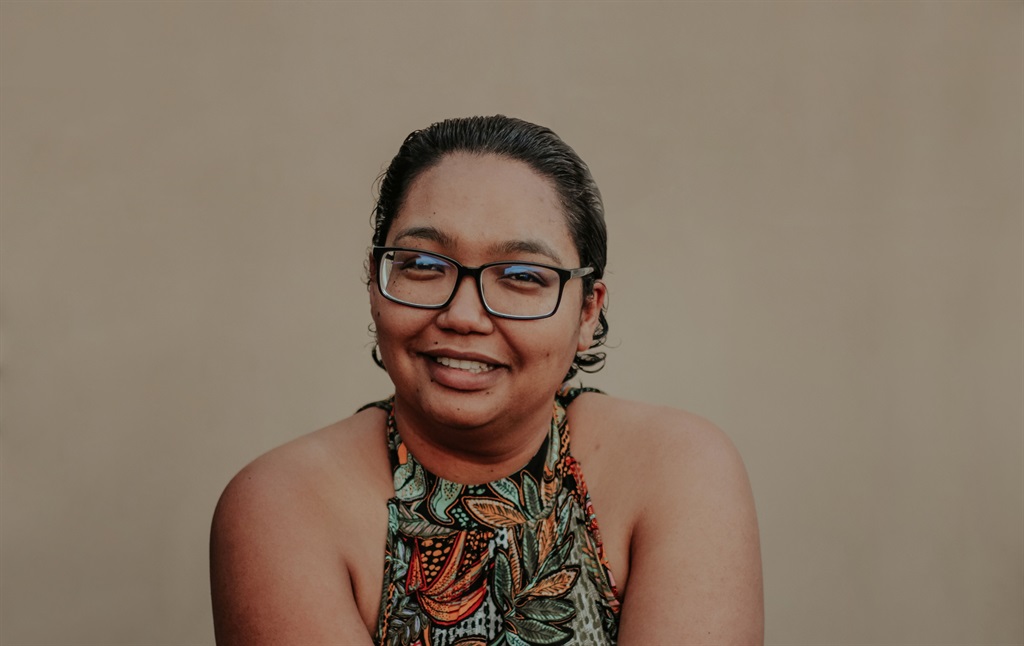 Author of Ougat, Shana Fife, is a work-from-home mother of three who runs a very successful blog. She has a BA in Live Performance, Music and Film from AFDA Film School and a Certificate in Journalism from City Varsity. This is her first book. Photo supplied by Jonathan Ball Publishing

READ MORE | Here are 10 pivotal quotes by Melinda Gates as told to Redi Tlhabi, plus Melinda shares profoundly personal details about her family in her book

Like with any Coloured affair that needed planning and coordination, everyone was also angry. (My family doesn’t do well under pressure. Every emotion can somehow slide into anger.) Regardless, after the half-assed speeches and an awkward pause for me and my cousin to unveil the gift, I remember hearing my uncle mutter a drunken, ‘Lat Louis dit oop maak – hy’s die boy.’

I honestly had no idea what that meant. Even my baby brain knew that there was no logical link between the two sentences – why should Louis open it, just because he was the boy? But everyone else seemed to understand, leaving me doubting my own judgement.

After an anticlimactic unveiling, it was time for the food. I cannot remember what was on the menu, but I am willing to bet it was biryani and chicken something. It was always chicken something. And let me tell you, the dishing up always went the exact same way. The women would spend hours in the kitchen cleaning and cooking and preparing treats, while the men did something enjoyable in the other parts of the house.

Whether the men indulged in a sports match on TV or sat and had a few drinks in the yard, they were always having a good time while they waited for the food. Once the food was prepared and laid out on the table, the women would stand back as the men were given first pickings of the dishes: ‘Lat die mansmense skep.’

Men dished up first. This was the rule. And on the odd occasion that a woman was at the front of the line, she was probably dishing up for her incapacitated husband.

Following the meals, women would hurriedly excuse themselves from the dining table to make their way to the kitchen again, this time to clean and pack away the dishes and leftovers, and to make way for the cakes and tea that they would prepare. As the men recovered from a hard day’s worth of doing absolutely f*** all.

But it always seemed like the women were happy to be on their toes, parading around for the men. Instead of having their own identities, their entire self-worth was based on how well they served their husbands, on how other women, and men, saw them serving their husbands. The manlier their wifely servitude made their men look, the more accomplished the women felt.

Come back to the present with me for a second.

The parameters for being a woman have both changed and remained the same in the minefieldesque online landscape we live in. Yes, we are making up words now; just go with it.

These days, you are allowed to be a liberated woman. It is encouraged, mostly. As long as your femininity comes with a comfortable sexuality. A calm sexuality that isn’t aggressive.

You may embrace your vagina, but in a demure, shy way. Even if you aren’t shy, pretend to be, it’s cute. You know, fragile masculinity cannot handle women speaking of their own vaginas as if they are proud or something – only men are allowed such liberties: to speak of our vaginas. Any liberties, really. Liberty is only a lady, because she was created for the enjoyment of straight men.

"A bold, unapologetic memoir about abuse, coming-of-age, a woman owning her sexuality and seizing her power. Shana Fife has a unique and compelling voice, which she uses with great effect to break with gender and sexuality taboos."
Dr Barbara Boswell, author of Grace: A Novel

Though in another twist of irony, if you do decide that you are tired of years of oppression and want to use your lady bits for your own pleasure, you have to tell everyone about it. If you don’t, you might find yourself, instead of fighting the patriarchy, fighting those who fight the patriarchy. They tell you exactly why you are complicit in the oppression of women – but they do this by not allowing you to be a woman outside of their parameters. Instead of identifying their own internal struggles with authority, their own failed relationships with men and with themselves, they force you into their definition of liberation. Oppressively liberating their idea of you and who you should be into only one type of freedom: the freedom to shout vulgarly about your p****, even if you don’t particularly want to.

But the alternative is whispering it quietly and coyly so that the men who know you are proud of your silent, ladylike take on this New Aged feminism bullshit.

You cannot simply exist as an equal to everyone, with sexuality just being a normal part of who you are. It must either be only who you are, or definitely who you are not.

Of course, marriage is no longer the goal, unless you want it to be; but other women should definitely aim for it, because you are pretty sure they are just responding to loneliness with fake independence. Your independence is different, though; you like being alone – until you find a man who is worthy of you, or will put up with your absolute lack of personality and your unwillingness to compromise on anything. So that your feminist friends and woke men compadres can be proud of how you are actively breaking the mould.

So that you can instead be the bully and right every prejudice – by cancelling anyone who disagrees with you, believing every woman who has a claim against any man and throwing people into jail for merely defending themselves (unless the said offenders are people you know personally: then it is okay to empathise and work on a case-by-case basis). Never back down, but also accept duality with an open chakra. Align your goddamn chi, or decalcify your pineal gland by avoiding fluoride, but for the love of God, hygiene – you’re a lady. Nobody likes a smelly woman. Jy lê lanks ’n man.

And if you do want to get married, you can pretend to agree to ‘be submissive’ in your vows, just for the show (because being too liberated isn’t conducive to being wifey material – and true liberation does not exist off Facebook, right? Activism means sharing the right memes to make a difference. But we still like piel in real life).

It is fine to be a wild feminist until a man finds it endearing, but once you are married you can stop the charade: you have made your point, love. Now you must be as liberated as your husband allows you to be and constantly give him props for his open-mindedness, or he might just say you can’t be liberated anymore. You wouldn’t want to embarrass him. Especially if he allows you to be yourself and doesn’t expect you to do ‘all the wife things’, because he takes your goals into consideration. What a legend. * Ougat is available at leading bookstores at a recommended selling price of R260.

** Some words have been blocked out with asterisks (*) as per W24/ News24 policy, however they appear fully in the book.

Sign up to W24's newsletters so you don't miss out on any of our stories and giveaways.
We live in a world where facts and fiction get blurred
In times of uncertainty you need journalism you can trust. For only R75 per month, you have access to a world of in-depth analyses, investigative journalism, top opinions and a range of features. Journalism strengthens democracy. Invest in the future today.
Subscribe to News24
Next on W24
EXCERPT | My Broken Vagina: One woman's quest to fix her sex life, and yours