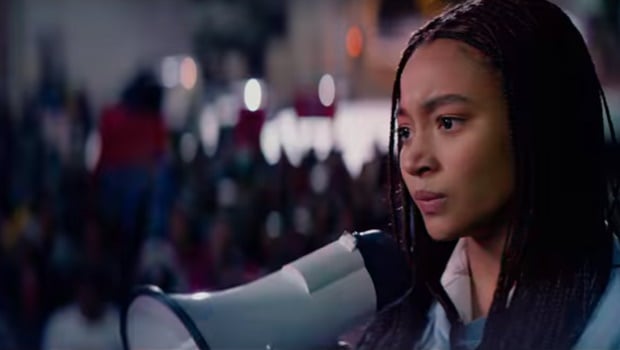 Recently at the BET awards, Amandla Stenberg and Regina Hall introduced audiences to the trailer for The Hate U Give, the up and coming movie about police brutality against unarmed black citizens.

The book is based on the bestselling novel by Angie Thomas and chronicles the story of 16-year-old Starr who witnesses the shooting of her unarmed best friend at the hands of a white police officer.

The trailer, which features Amandla in the lead role and also stars the phenomenal Issa Rae, will give you goosebumps – watch it below.

When I reviewed this book last year, I said that this is “a novel that sums up what it’s like for black communities to constantly deal with the systematic, insidious and hate-fuelled oppression they’ve been dealing with since the dawn of civilisation, and it’s one that I’m fairly sure will be eye-opening to many, even those who consider themselves the staunchest Black Lives Matter allies.”

We have high hopes for this important movie. It may be a reflection of American society, but the story featured is one that echoes across many nations – particularly here in South Africa, where racism and injustice still forms a massive part of our fabric.

The more we talk about it, the more we can acknowledge and address it.

Yes, it feels to many like the subject is constantly harped on about, but I often find that it’s so easy for people to complain about hearing too much about something that doesn’t affect them when others have to live injustice every single day.

And right now, no matter how educated we think we’re on a subject, there’s always room to expand our knowledge.

Here’s a roundup of books that tackle various forms of social inequalities and injustice that we would like to recommend: The blurb of the book reads: “Luthuli’s lively first-hand account tells of the repression and resistance that were to shape the South African political landscape forever: the Defiance Campaign - the first mass challenge to apartheid, the drafting of the Freedom Charter, the Treason Trial and the tragedies of Sharpeville and Langa.”

Buy a copy from Raru.co.za

A post shared by Penguin Books South Africa (@penguinbookssouthafrica) on May 18, 2018 at 8:45am PDT

We’ve been seeing some tremendous and awesome reads from South African women lately. A collection of essays you need to get your hands on is, Sorry Not Sorry, by columnist and author Haji Mohamed Dawjee.

In her book Dawjee tackles a variety of issues important in South Africa’s landscape and delves into them through the perspective of a brown woman, without sugar coating anything.

Like our reviewer says: “It’s an exceptional compilation that engages in white supremacy across linguistic, cultural, and economic factors. It’s almost a sobering look at the undercurrent of white privilege in South Africa and how it formed a brown woman’s self-worth growing up.”

Some stories need to be told... #Repost @okaysobooksically (@get_repost) ··· ?? "They think just because I close my eyes and shut my ears and follow their words, that I have forgotten who I am. They think I am theirs to make. But that is not my truth." . . . . . . ?? Thanks so much to @panmacmillansa & @panmacmillansakids for sending me a copy of 'The Ones That Disappeared' by Zana Fraillon. Check out the synopsis bellow of this book that takes on such a heartbreaking, and very real, topic! . . . . . . . ??SYNOPSIS: A moving, beautifully-written and poignant novel about child trafficking and the search for freedom.Kept by a ruthless gang, three children manage to escape from slavery. But freedom isn't just waiting on the outside.Separated, scared and looking after a small child, Esra will do whatever she can to reunite with her friend Miran, who was captured by the police - the police who she mustn't trust.Hiding in the shadows of the forest, Esra is found by a local boy, a boy with his own story. Together they will create a man out of mud. A man who will come to life and lead them through a dark labyrinth of tunnels until they finally have the courage the step above ground. Until they finally have the courage to speak their story. Until they finally have the courage to be free.

The Ones That Disappeared by Zana Fraillon

A heartbreaking novel about child trafficking and slavery, The Ones That Disappeared tells the story of three children desperate for freedom after being captured by a ruthless gang. But escape doesn’t always mean freedom is around the corner and courage can be hard won when it feels as if there’s no one to trust.

The gruelling and compelling story of a young girl desperate to be reunited with a friend after making her escape doesn’t make for easy reading, but it’s certainly important in that it highlights the ugliness and inhumane cruelty of human trafficking.

Not That Bad: Dispatches from Rape Culture by Roxane Gay

A compilation of important essays that tackles what it means to live in a world where women constantly have to deal with living in danger, harassment, rape and assault.

This important read covers accounts on the rape crisis and the epidemic we’re facing worldwide and includes first-hand accounts of harrowing molestation and rape and is at once deeply personal and heartbreaking.

Everyone should read this.

We live in a world where facts and fiction get blurred
In times of uncertainty you need journalism you can trust. For only R75 per month, you have access to a world of in-depth analyses, investigative journalism, top opinions and a range of features. Journalism strengthens democracy. Invest in the future today.
Subscribe to News24
Related Links
‘Easy, lucrative and low risk’ – why SA’s cash-in transit crime rates are so high
What it looks like when equality starts feeling like “oppression” for some white authors
When is the fat princess going to get her happily ever after?
Next on W24
EXCERPT | Transitioning Later in Life: Loss/gain of male privilege