The Scandal actress shared the picture of the cover on her Instagram with this caption:

"So...You know me. I'm not one to be quiet about a magazine cover. I always celebrate it when a respected publication invites me to grace their pages. It's an honor. And a privilege. And ADWEEK is no exception.

"I love ADWEEK. It's a publication I appreciate. And learn from. I've long followed them on Twitter. And when they invited me to do a cover, I was excited and thrilled. And the truth is, I'm still excited. I'm proud of the article. And I like some of the inside images a great deal. But, I have to be honest...I was taken aback by the cover.

"Look, I'm no stranger to Photoshopping. It happens a lot. In a way, we have become a society of picture adjusters - who doesn't love a filter?!? And I don't always take these adjustments to task but I have had the opportunity to address the impact of my altered image in the past and I think it's a valuable conversation.

"Yesterday, however, I just felt weary. It felt strange to look at a picture of myself that is so different from what I look like when I look in the mirror. It's an unfortunate feeling.

"That being said. You all have been very kind and supportive. Also, as I've said, I'm very proud of the article.

"There are a few things we discussed in the interview that were left out. Things that are important to me (like: the importance of strong professional support and my awesome professional team) and I've been thinking about how to discuss those things with anyone who is interested, in an alternate forum. But until then...Grab this week's ADWEEK. Read it. I hope you enjoy it. And thank you for being patient with me while I figured out how to post this in a way that felt both celebratory and honest.
XOXOXOX"

Lena Dunham on the cover of Tentaciones 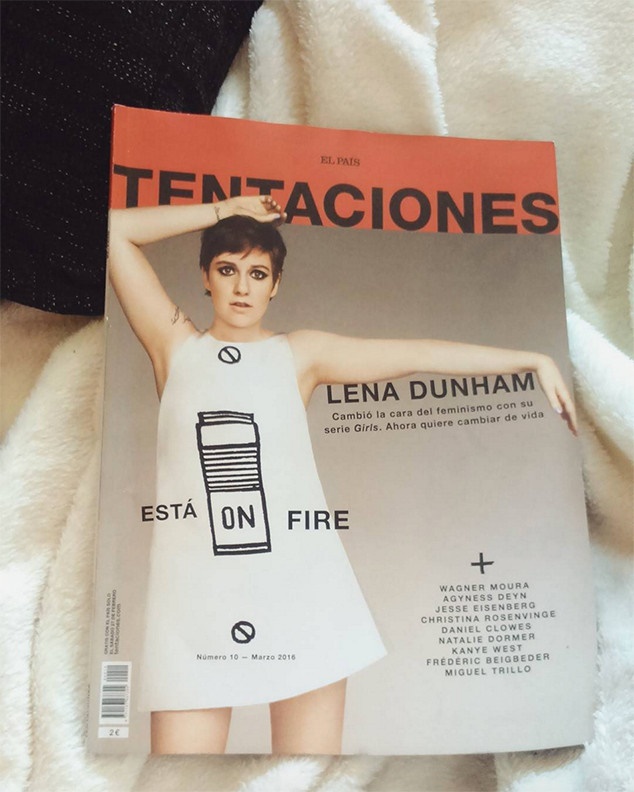 Lena herself took to Instagram to address the controversial cover saying:

"Oh hello El Pais! I am genuinely honored to be on your cover and so happy you licensed a pic by @ruvenafanador, who always makes me feel gorgeous. BUT this is NOT what my body has ever looked like or will ever look like - the magazine has done more than the average photoshop. So if you're into what I do, why not be honest with your readers? Much love, Lena."

The mag later apologised to Lena.

Priyanka Chopra on the cover of Maxim Priyanka's armpits look unnaturally smooth. Like someone went a little too overboard with the smoothing tool.

She posted this image on her Twitter in response to the outrage that the cover caused. Ally Brooke Hernandez was given two right feet in an image for Billboard. She pointed out the mistake on Instagram with a picture saying: "When you're tryna look cute even tho you got two right feet" The model best friends were on the cover of W Magazine for its 10th anniversary issue and it was pretty bad. Like, they had no knees bad.

Vogue and the Paralympic faux pas Remember that ad from Vogue magazine where they used able-bodied models and then photoshopped them to appear differently-abled?

Gisele Bündchen for Myself magazine Maxim denies slimming down Ashley Graham for this cover, but the star does look much thinner than usual.

The white woman who thought blackface was "beautiful" This is my favourite one because this woman actually thought this was a good idea. Boglarka Balogh, a 34-year-old Hungarian journalist, decided to photoshop herself into 7 different African women, and... HAHAHAHAHAHAHAHAHA

We live in a world where facts and fiction get blurred
In times of uncertainty you need journalism you can trust. For only R75 per month, you have access to a world of in-depth analyses, investigative journalism, top opinions and a range of features. Journalism strengthens democracy. Invest in the future today.
Subscribe to News24
Next on W24
Gwyneth Paltrow has mastered not accidentally flashing on the red carpet