From diplomatic dressing and priceless jewels, bold block colours and pearls to tweed and a headscarf - Britain's Queen Elizabeth is known for her unique wardrobe and style.

Brightly coloured outfits with matching hats and umbrella trim, black pumps and her omnipresent handbag have become staples for the monarch, 96, who marks her Platinum Jubilee this year.

"She has developed her own consistent signature style," said Elizabeth Holmes, author of HRH: So Many Thoughts on Royal Style.

"She has the same shape hat, the same silhouette of coat, those fantastic block black heels, her three strands of pearls. But then also within those guardrails, she has a lot of fun with fashion... The queen is famous for her block colours."

Those colours have ranged from canary yellow and bright green for the weddings of her grandsons, Princes William and Harry, to purple and pink for the horse racing at Ascot. She's chosen red, bright blue and orange on official visits.

"There's a tremendous amount of thought put into the queen's wardrobe and it's so important because when she steps out of the car, everybody looks at what she's wearing. Everybody wants to see the queen," Holmes said.

At the start of her reign 70 years ago, Elizabeth's outfits were made by royal designers Hardy Amies and Norman Hartnell, who created her wedding and coronation gowns. More recently personal assistant, adviser and curator Angela Kelly has planned her wardrobe.

"The Queen has a fantastic understanding of clothes and fashion and is very aware of what suits her, what would be appropriate for any occasion," Kelly wrote in her 2012 book "Dressing The Queen". 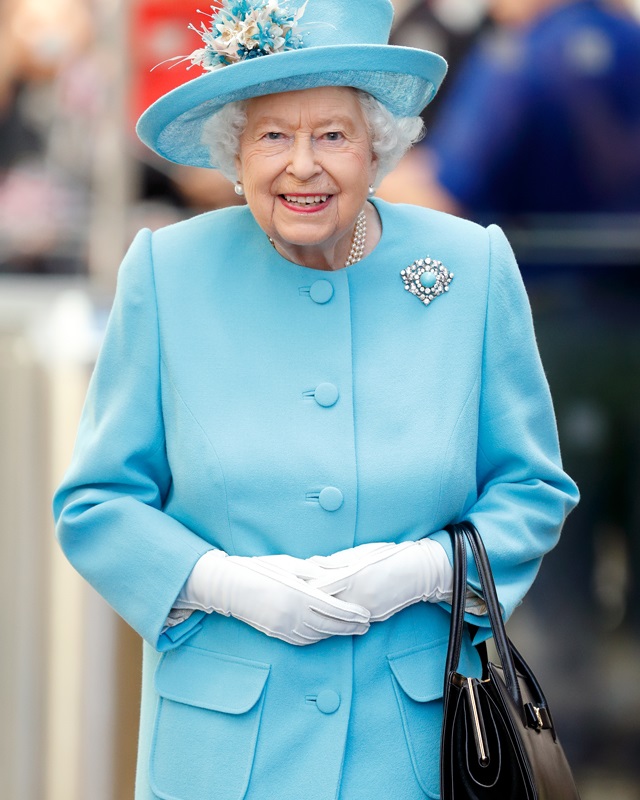 Queen Elizabeth II walks out of Government House to unveil a statue of herself on 3 July, 2010 in Winnipeg, Canada.
Photo: John Stillwell - WPA Pool/Getty Images

That means choosing the right colours, embroideries for gowns, non-crease fabrics and ensuring necklines, sleeves and hemlines are the correct length. Kelly's team also logs outfits, and the queen herself reviews designs.

For her historic 2011 visit to Ireland, Elizabeth wore a green outfit to meet then President Mary McAleese, while her evening gown for a state banquet featured silk shamrocks.

"Because the queen really isn't supposed to say anything out loud, I feel that what she wears is really one of the only ways that she has of expressing her feelings," Lydia Slater, editor-in-chief of Harper's Bazaar, said.

"Her brooches, which she has a huge collection of, are a way that she can potentially add a little layer of meaning to what she's wearing."

For both William and Harry's weddings, the monarch wore brooches "associated with ... love and with happiness", Slater said. For her Christmas address in 2021 - the year her husband Prince Philip died - she wore a brooch from her honeymoon.

For more casual looks, Elizabeth is often seen in brown or blue tweed and a headscarf.

"She's just created a whole royal dressing look ... It's absolutely recognisable. It's immediately visible. It's used as a diplomatic tool and it's comfortable," Slater said.

"It just fulfils all her requirements and it will never go out of fashion because it's sort of never in fashion. It's just essentially itself."