Halle Berry has sparked rumours with a new man after posting a mystery man on social media. The star took to Instagram on Sunday and a shot of her bare feet next to an unidentified man, captioning the image, ‘Sunday funday’ with a red heart emoticon.

READ MORE: Why Jada and Will Smith felt talking about their past split was the 'best move'

The actress has not had a public romance since dating musician Alex in 2017. In a recent Instagram live chat she revealed why she has been single for so long following her divorce from French actor Olivie Martinez.

She disclosed that she has been primarily focused on her three children, sharing that she has learnt a lot from being with them and that they are the best company for her right now.

Halle previously shared she id okay with being single, "I have decided to take time. I'm very much a relationship-oriented person, I always want to be with someone. But I decided, no I'm going to slow my roll, I'm going to take a minute and I'm going to spent time with me."

We live in a world where facts and fiction get blurred
In times of uncertainty you need journalism you can trust. For only R75 per month, you have access to a world of in-depth analyses, investigative journalism, top opinions and a range of features. Journalism strengthens democracy. Invest in the future today.
Subscribe to News24
Related Links
Halle Berry shares her natural face mask recipe
Halle Berry credits yoga with helping manage her health issues
Ready? Okay! Halle Berry, Chrissy Teigen, Kendall Jenner and other celebs who were once cheerleaders
Next on W24
Love Island star, Amber Gill, hits back at trolls over weight gain 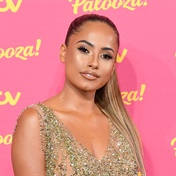 Subscribe to newsletters
Voting Booth
What are you most looking forward to buying this Black Friday?
Please select an option Oops! Something went wrong, please try again later.
It looks like the pandemic is still far from over, so more loungewear
17% - 25 votes
The lockdown has made me want to invest more in homeware and furniture, so I'll be adding those to my Black Friday cart
26% - 38 votes
I'm going to use it to get a headstart on Christmas gifting
38% - 57 votes
Footwear is all about comfort this year, so definitely sneakers
13% - 20 votes
It's a good time to get discounted wigs and other beauty essentials
6% - 9 votes
Previous Results
Fashion
Ethical fashion is confusing - even shoppers with good intentions get overwhelmed

We've found the most expensive PPE mask in the world and it features 250 grams of...