How Tyra Banks developed her famous smile with the eyes, now dubbed 'smize' and trademarked The model has become synonymous with the term - which means to smile with your eyes - and she's now explained how she developed the idea. “I came up with it because there's a way that when you look at a photo and you feel nothing, it's actually because the person is not smizing. So it's like their eyes are dead, and they're not giving you anything,” she says on NPR.

READ MORE: Tyra Banks: 'It was nice to break down the walls so others could walk through them'

“So for me, I turned that into smiling with your eyes. And I would teach models and even my family and friends about smiling with their eyes. And I was like, wait, that is too much. When we tell somebody to smile for the camera, we say cheese. So I need to make this one syllable. So I stayed up all night, y'all,” she adds.

Related Links
Tyra Banks believes everyone deserves to feel beautiful and have their uniqueness celebrated
Tyra Banks praises Gabrielle Union for her authenticity after America's Got Talent exit
'People who say negative things about age have personal insecurities' - Tyra Banks hits back at...
Share
Next on W24
How Alicia Keys was affected by her dad's absence - 'I definitely was always looking for his love' 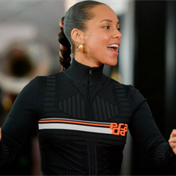