What do you do when you're having a slow news week on the celebrity gossip front? Make it up of course! Erm, what?

Look, gossip rags are admittedly never all that reliable to start with, but surely we can expect some standards from tabloids? I mean, they wouldn't completely make up stories and spread them while being absolutely aware they're total fabrications, right?

Wrong. Tabloids, from the Daily Mail to South Africa's very own Lifestyle Tabloid, tabloids make up stories all the time.

According to Star, Lindsay hates Jennifer because Jennifer's boyfriend rejected Lindsay four years ago. Sound ridiculously petty and stupid? That's because it's not even true.

Not only this, but, according to Gossip Cop, Star admitted the story was based on a fabricated interview, but ran with the story anyway.

We're assuming, when this decision was made, it looked something like this.

I suppose who needs to care about such insignificant things as "truth" and "integrity" when there's a chance to make up pointless and harmful rumours?

2. Lifestyle Tabloid announces a new e.tv reality show, Zuma's Housewives, which turns out to be news to both e.tv and Zuma's wives.

As Channel24 reported, e.tv was furious when Lifestyle Tabloid published an entire article claiming that a reality TV show about Zuma's wives was about to become Africa's most-watched show.

Africa's next most-watched show: "So you think you can dance as well as Jacob Zuma?"

Luckily for what remains of our President's dignity, (and unluckily for SA reality TV fans,) the whole thing was a fabrication of Lifestyle Tabloid's imagination.

3. The Daily Mail gets tired of waiting for JK Rowling to slip up, invents a scandal instead.

JK Rowling is one of Britain's most successful and respected women, so it's perfectly natural for the Daily Mail to desire a story that makes her seem like a horribly deluded, narcissistic bitch. Unfortunately for them, Rowling seems to just keep on being talented and lovely.

Considering this, it might have seen like a good idea at the time when they tried to claim Rowling had upset fellow churchgoers by accusing them of stigmatizing her as a single mother, but the lawsuit they're now facing from Rowling herself has probably changed their mind. At least it's given the Huffington Post something to report about.

We must say, if you're going to make up a gossip story about one of the world's most well-known fantasy writers, can't you at least attempt to be a little bit more creative?

You have disgraced your house, Daily Mail. Ten points from Hufflepuff!

Kim Kardashian is every gossip columnist's favourite punching bag, so the fact that she's planning a wedding with no apparent melt-downs or panic-attacks must be frustrating to tabloids worldwide.

I mean, how dare she seem happy when she has such a good crying face?

Still, we don't think that's any reason to invent a melt-down.

The cover of In Touch Weekly would have you believe Kim's wedding planning is a train wreck. It even has a picture of Kim crying next to another one of her trying (and failing) to get into her dress.

The problem? The picture of her crying is an old one and the one of the wedding dress isn't even Kim. 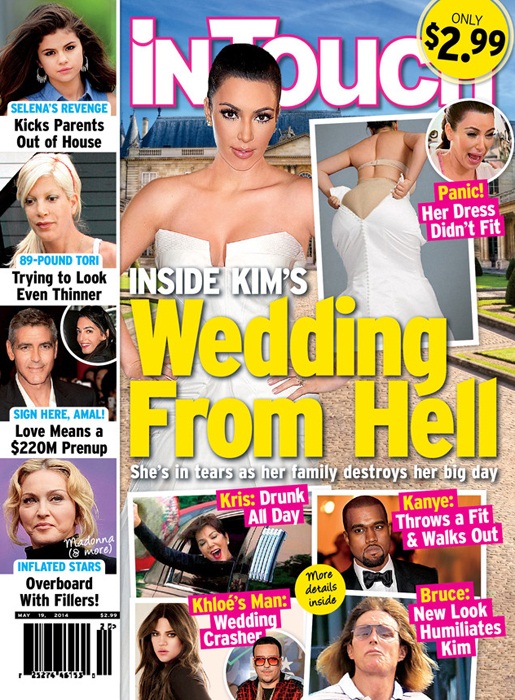 According to E! Online, Kim loves her dress, which fits her perfectly, but, to be fair "Wedding from Hell" is a much catchier title than, say, "Woman Plans Wedding. Nothing Bad Happens".

Do you know of any other stories that turned out to be fake? Tell us in the comments below.

Follow Women24 on Twitter and like us on Facebook.
We live in a world where facts and fiction get blurred
In times of uncertainty you need journalism you can trust. For 14 free days, you can have access to a world of in-depth analyses, investigative journalism, top opinions and a range of features. Journalism strengthens democracy. Invest in the future today. Thereafter you will be billed R75 per month. You can cancel anytime and if you cancel within 14 days you won't be billed.
Subscribe to News24
Related Links
4 badass Samuel L Jackson memes that make fun of that awkward interview
Next on Life
Lizzo declares she's in love with boyfriend Myke Wright