Here in SA, our girl gamers are just so unbelievably epic. I’ve been following a few on Youtube and I’m loving what they’re doing on their respective channels.

From awesome game play demos to reviews, how-tos and livestreaming videos, these local women’s passion for gaming is nothing short of fierce, infectious and – most of all - will make you want to head to your nearest PC or console and get in on the action.

Meet Nikita, Sam, Sharon and Arielle and be sure to check their YouTube channels out:

Update: There are many wonderful SA gamers out there. Unfortunately we couldn't feature everyone in one post, so look out for future instalments featuring more of our local female gamers kicking some serious ass. Nikita describes herself as a doctor, gamer and geek in her Twitter bio. She’s part of the You Tube Wolf Pack crew which hosts a bi-weekly podcast featuring gaming news.

I asked her what she loves about gaming and what it means for her to be able to share her playing experiences online.

Here’s what she had to say:

“What I love about gaming is getting immersed into a story! I love believing that I am this protagonist doing all these incredible feats that I would never be able to do in reality!

“Also I love how it takes me away from my daily stresses in life , it helps me to clear my day especially if I’ve had a rough one.

“Initially I was terrified to share my gaming experiences because I wasn’t a professional gamer then I became friends with an incredible group of people who encouraged me to share my gaming fails and salty moments on YouTube and soon we formed the YouTube Wolfpack.

“I’ve gotten so much support from everyone, people have told me that it’s refreshing to see someone die over and over again in a game as it makes them feel like they’re not the only ones! It makes me feel so happy to get feedback that watching me play has made someone laugh and in my videos I love to encourage kindness online so to see an online community respond to that makes me incredibly happy."

WATCH: A snippet of her Life is Strange: Before the Storm game play. Sam needs no introduction. The bubbly editor of TechGirl is passionate about gaming, Esports and geeky gadgets. Her YouTube channel not only includes live streaming gaming demos but also features gadget demos and how-tos, product reviews, local and international Esport news and TV and movie features amongst others.

When we interviewed her earlier this year, she had this to say about the role of Esports and women in gaming:

“If we, as the local Esports community, got behind a female team and gave them the support they needed to train as well as pushed for an invite to one of these competitions - we have the talent to win one of those competitions and ultimately push eyeballs to the South African scene and ultimately then get our best teams over there.

“More so I believe strongly that there are far more competitive female gamers in SA then we realise. They have just not had a platform to showcase their skill. The Valkyrie Challenge was just my first step in showing off this talent and allowing these ladies the opportunity to be noticed.” Sharon, or "ShazZ" as she’s known in the local gaming community, has made quite the name for herself. The competitive Esports player has competed and won events at the Copenhagen Games tournament as part of an all female Counter-Strike: Global Offensive team.

While she has some uploads on her YouTube channels, she mainly uses her YouTube to livestream her games. You can check out her account here – make sure to especially bookmark the link to her stream so that you can be in the loop when she goes live.

I asked her what she loves most about gaming and streaming her content on YouTube. She says:

“What I love about gaming is that it takes your mind off real life problems.  You get to just shut off the real world for a while and you get to meet amazing people while gaming.

“It’s just a really fun and competitive hobby that turned into a career for me.

“I love sharing my lack of CS skills to people :D and just enjoy sharing what I do with other people and hopefully they love it too!”

Stay tuned for our forthcoming interview with Sharon.

Check out her Facebook as she often updates and lets her followers know when she’s going live.

WATCH: How fast can you ace? Deagle Ace 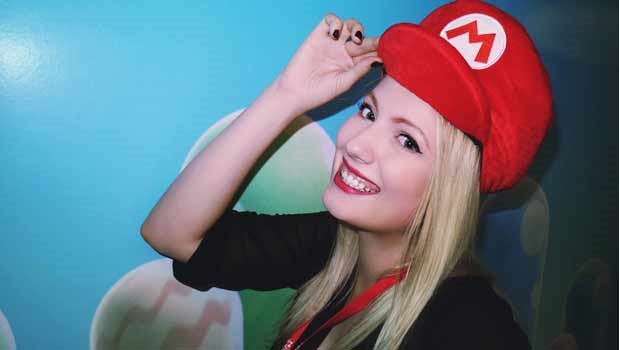 Arielle, also known as Constantine104 on her YouTube channel, not only writes content features that feature on TechGirl, but her YouTube channel is filled with amazing game play – I particularly love her Let’s play Sims and Life is Strange vids.

Here’s what she had to say when I asked her to tell me about the game play she loves sharing most and what games she’s looking forward to sharing with us in the future:

“The Let’s Play that is closest to my heart is definitely Life Is Strange, I just love how it showcases humanity at its most raw and natural.

“It’s a game based entirely on making difficult life-changing choices and it’s great to see how everyone approaches these choices differently and it opens the dialogue up for some really meaningful conversation.

“Alternatively, I really enjoy playing games like The Sims and GTA5 on my channel just to show the world that it’s time that stereotypes get laid to rest, I can enjoy playing The Sims and then also enjoy racing a stolen car through the streets.

“Gaming is about an escape and not having to live by the rules.

“Over the past year I’ve struggled with internet access which has really limited the games that I could play on my channel and how often I could upload, but after a long struggle, I finally have it fixed.

“Starting next year I can’t wait to share some of the online games that I love with my audience, my first picks would be League of Legends/Guild Wars 2 and then I would also love to start playing games WITH my audience, maybe creating teams on CSGO and playing against each other to see which team is victorious.

“My main goal when I started my channel was to create a community of people who all had a voice, could be themselves and who all knew they were important so that's what I want to grow and expand upon every chance I get and having the ability to play online games and live stream going forward is the next step in achieving that.”

SIGN UP TO W24’S NEWSLETTERS SO YOU DON’T MISS OUT ON ANY OF OUR HOT STORIES AND GIVEAWAYS.

We live in a world where facts and fiction get blurred
In times of uncertainty you need journalism you can trust. For 14 free days, you can have access to a world of in-depth analyses, investigative journalism, top opinions and a range of features. Journalism strengthens democracy. Invest in the future today. Thereafter you will be billed R75 per month. You can cancel anytime and if you cancel within 14 days you won't be billed.
Subscribe to News24
Related Links
What it's like to be a writer and gamer with a visual disability
You won't want - or need - to put down the Nintendo Switch
Mario + Rabbids - the wacky, silly, must-have game that will entertain you for hours
Next on W24
Luxury and misinformation: Inside the TikTok controversy about Chanel's pricey advent calendar