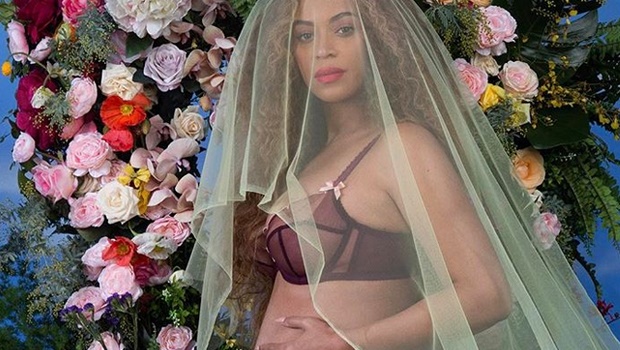 Beyonce's announcement that she was expecting twins back in February 2017 took the internet by storm.

Beyoncé, Kylie Jenner and Kim Kardashian are amongst the most followed celebrities on instagram – so you can definitely expect that their posts have high level engagement.

And when their posts usually mark them celebrating something – a birthday, new beauty line or a baby, you can be sure that their fans will be there to double-tap the posts of their faves.

Baby-related posts are particularly popular, so while we’re waiting for The Duchess of Cambridge, Kate Middleton to give birth and break the internet with photos of Prince George and Princess Charlotte’s little brother or sister, we highlight some of the best and most liked celebrity baby and pregnancy announcements:

READ MORE: This 107-year-old great-grandmother is a social media star

Breaking away from the Kardashian tradition of early big reveals, Kylie kept everyone on edge by keeping her pregnancy away from the public eye as much as possible.

In fact, in an Instagram post, shortly before she posted what would trump Beyonce’s pregnancy announcement as the most liked instagram post of all time, she explained that she wanted the prepare for the life-changing role as mom in the most stress-free way possible.

She added that she also wanted to chose one private thing to not do in front of the world, and frankly, we don’t blame her.

And thus, the below post, with over 17 million likes, went on to become the most popular post on the platform.

She may since have been dethroned in terms of having the most Insta-worthy baby-related post, but Bey did break the internet when she first announced that she and Jay-Z were going to blessed “two times over, ” confirming that she was pregnant with twins.

Since she’s given birth, we’ve only seen one official pic of Sir and Rumi Carter, although there have been some leaked photos that have surfaced. We’re totally hoping that Bey will give us an update soon – and no doubt she’ll have the Beyhive in a frenzy when she does.

The pregnancy announcement garnered over 11 million likes, while the first viewing of the twins received over 10 million likes.

The soccer giant is one of the most followed celebrities on Instagram, with more than 124 million followers.

Currently dating Georgina Rodriguez, who is the mother to his now 5-month old daughter, Alana Martina, his Instagram post showcasing a photo of him and his son, Cristiano Jr pictured with Georgina following the birth of Alana boasts an impressive number of likes – over 11 million likes. It  still doesn't quite beat Beyoncé.

The Kardashians are in the top 20 most followed celebrities on Instagram, so it’s no surprise that Kim’s post introducing baby Chicago – born via surrogate – to the world gained more than 7 million likes.

Some people on Twitter have shamed Kim and Kanye for going the surrogacy route, but what many of them didn’t realise is that Kim has always been open about her pregnancy struggles and this post featured on Buzzfeed details why a third pregnancy would have been super risky.

A source has since confirmed that Khloe has given birth to a baby girl, but time will tell how this whole saga unfolds. We’re rather heartbroken for her because what is supposed to be one of the happiest moments in her life, is marred by the fact that her partner has been unfaithful.

I mean, look at how excited she sounds in this post (with over 8 million likes) when she announced her pregnancy. Either way, we hope for the best for Khloe and the baby and we can’t wait to see the first pic.

My greatest dream realized! We are having a baby! I had been waiting and wondering but God had a plan all along. He knew what He was doing. I simply had to trust in Him and be patient. I still at times can't believe that our love created life! Tristan, thank you for loving me the way that you do! Thank you for treating me like a Queen! Thank you for making me feel beautiful at all stages! Tristan, most of all, Thank you for making me a MOMMY!!! You have made this experience even more magical than I could have envisioned! I will never forget how wonderful you've been to me during this time! Thank you for making me so happy my love! Thank you to everyone for the love and positive vibes! I know we've been keeping this quiet but we wanted to enjoy this between our family and close friends as long as we could privately. To enjoy our first precious moments just us ?? Thank you all for understanding. I am so thankful, excited, nervous, eager, overjoyed and scared all in one! But it's the best bundle of feelings I've ever felt in my life! ??????

Tennis champion Serena Williams has been living her best life. Between winning grand slams, getting married, and giving birth to a darling little girl – we are stanning this glowy, radiant Serena and hope that her happiness and success will keep growing from strength to strength.

If you browse through her Instagram photos, you’ll catch glimpses of photos from her wedding and you can just tell she’s completely gaga over momhood with the cuter than cute snapshots of Alexis.

This gorgeous photo of her introducing Alexis to the world racked up over more than 1 million hits.

Meet Alexis Olympia Ohanian Jr. You have to check out link in bio for her amazing journey. Also check out my IG stories ????????

We live in a world where facts and fiction get blurred
In times of uncertainty you need journalism you can trust. For 14 free days, you can have access to a world of in-depth analyses, investigative journalism, top opinions and a range of features. Journalism strengthens democracy. Invest in the future today. Thereafter you will be billed R75 per month. You can cancel anytime and if you cancel within 14 days you won't be billed.
Subscribe to News24
Related Links
A woman asked this Instagram user to block her boyfriend – and this is why
Can you guess the most Instagrammed hoods and cities in SA?
Local wedding cake businesses you should follow on Instagram right now
Next on W24
Luxury and misinformation: Inside the TikTok controversy about Chanel's pricey advent calendar