Can you guess the most Instagrammed hoods and cities in SA?

PropertyFox's deep dive into the ‘virtual neighbourhoods’ this year revealed that insiders are loving the outliers, which means that people are moving further away from city centres to enjoy increased space at potentially more affordable rates.

Together with Metric, they sifted through around 60,000 hashtags, posts and comments from South African residents.

Turns out that the Mother City is the most mentioned city, once again, says Crispin Inglis, PropertyFox co-founder, with Johannesburg and Durban following behind.

"Camps Bay remained the most hashtagged hood in the country, with newcomers Hout Bay and Umhlanga coming in second and third, respectively," says Inglis. While Sandton fell to number seven on the list from second place in 2016, Bloubergstrand, Soweto and Sunningdale all interestingly made the top ten list for the first time this year, adds Inglis.

READ MORE: Here’s what R50 million will buy you in Cape Town, Joburg and Durban 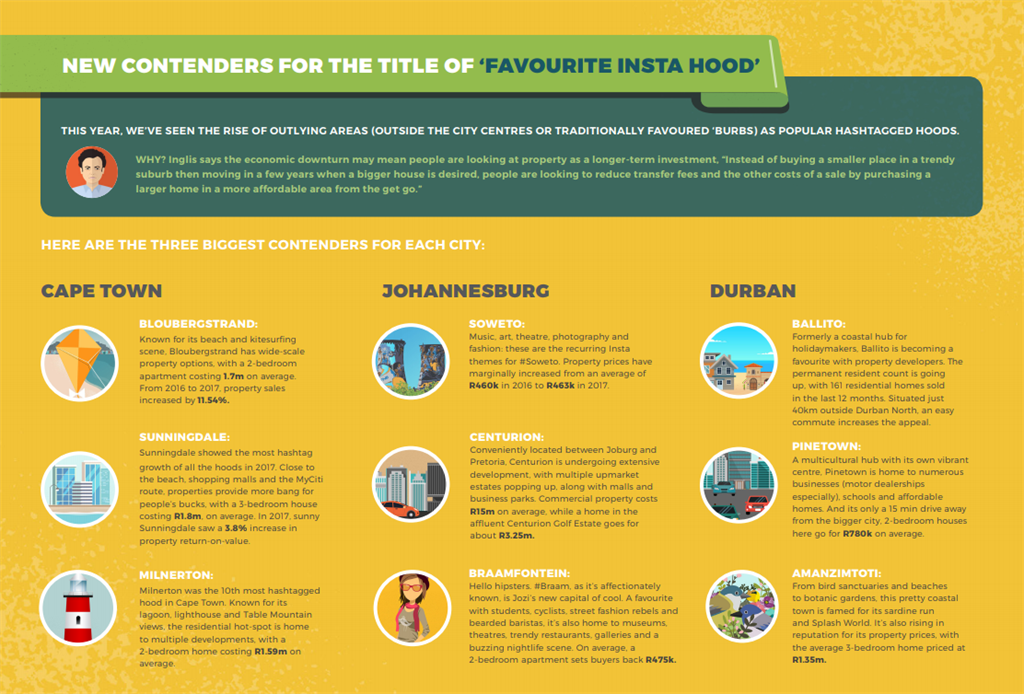 Inglis believes that in the midst of the economic downturn, people are adopting a longer-term outlook on property investment.

“Instead of buying a smaller place in a trendy suburb, then moving in a few years when a bigger house is desired, people are looking to reduce transfer fees and the other costs of a sale by purchasing a larger home in a more affordable area from the get go,” he says.

If you're a property investor, know that Sunningdale saw the most hashtag growth of all the hoods. It also had a 3.8% increase in property investment. Other areas of interest included Centurion (2.2% growth), Braamfontein (2.2% growth), and Durban’s Port Shepstone, which was the clear winner with 1371% year-on-year property price growth. When it came to the most hashtagged restaurants and bars, Grand Africa Café & Beach in Cape Town, Marble in Joburg and Eyadini Lounge in Durban were among the top three. Who mostly influences the popularity of places?

READ MORE: 11 things to do around South Africa that won't cost you a thing

They were found to play a crucial role in driving the popularity of places to eat and socialise. Inglis explains that social media is a major currency of credibility.

"When an influencer raves about a restaurant, it’s not long before everyone’s eating there – for example, Tshepang Mollison is known for posting gorgeous foodie snaps from around SA, which no doubt catalyses more business for these institutions. The same goes for areas and property trends.”

Today’s lunch spread @si_cantina_sociale! Went for a selection from the tapas menu because I really couldn’t decide. Those meatballs?! ???? #twiggyisafattie

Here are a few more juicy facts that the results revealed: 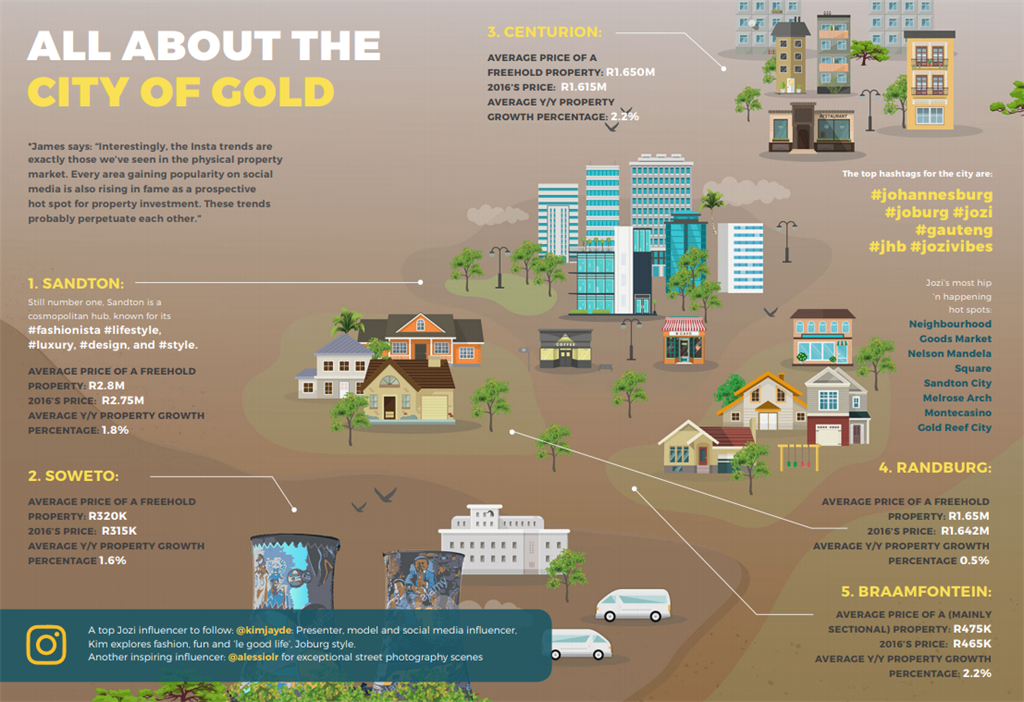 We live in a world where facts and fiction get blurred
In times of uncertainty you need journalism you can trust. For 14 free days, you can have access to a world of in-depth analyses, investigative journalism, top opinions and a range of features. Journalism strengthens democracy. Invest in the future today. Thereafter you will be billed R75 per month. You can cancel anytime and if you cancel within 14 days you won't be billed.
Subscribe to News24
Related Links
7 of the most expensive homes in SA right now
R25 million for a house basically right on the beach? Beach, please!
Seeking a unique wellness travel experience? Here's why Bushmans Kloof should be at the top of...
Next on W24
These are the top 10 honeymoon destinations for 2022