Carpenter by day, drag queen by night - husband has spent over R100 000 on his glitzy drag wardrobe Eva Waye, 49, is a joiner by day and a drag queen by night.
Photo: WILLIAM LAILEY/CATERS NEWS

This married man has revealed how he is a joiner by day, and a drag queen by night.

David Gibson, a.k.a. Eva Waye, 49, has spent the past two years moonlighting as an incredible drag queen.

The carpenter, from Long Eaton, Nottingham, UK, has a drag wardrobe worth more than £5000 (R100 000), packed to the brim with studded bikinis, short dresses and styled wigs.

David and his wife, Wendy, 67, love throwing drag events together and have raised thousands for local charities.

David said: "I've always loved watching people dressing up and doing their makeup routine. I just love everything about drag, too, from the performance, to the fit, the makeup and just talking and interacting with people."

David classes himself as a "glamorous body queen".

"I love to show everything off, and I have a lot of body confidence. I find being a drag queen so empowering. As soon as I've got the wig, the clothes, the shoes and makeup on, I feel totally different.

"It's crazy to see myself in the mirror. The only annoying thing is just how long it takes to get ready. It used to take me well over two hours to just do my makeup, although I can do it in just under an hour now."

David ensures his drag queen persona, Eva Waye, is dressed to the nines for each event, and has a very strict grooming regime.

"I get a tan once a week using a sunbed for about £9 (R180), it keeps my skin looking amazing, so I don't feel the need to wear skin-coloured tights anymore," he explains.

"I shave everywhere! It felt uncomfortable at first, but I hate it when my hairs get long now and can't wait to shave them all off."

David loves to grow his nails long, adding that he does not like fake nails. Although the long nails can make his job as a joiner a little tricky, "especially when carrying large pieces of timber".

"I'm a huge fan of bikinis and anything that shows off my body, so I have to make sure that I look my best at all times." 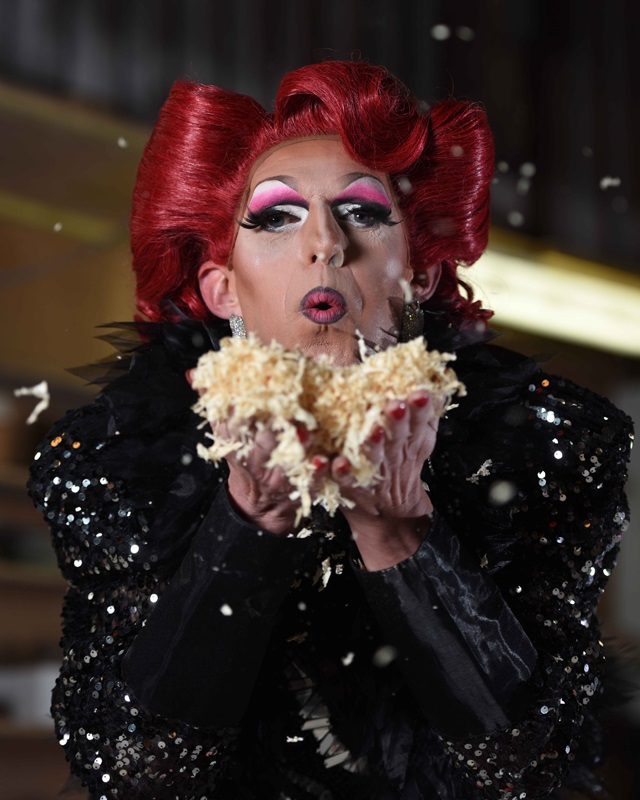 Eva Waye, 49, is a joiner by day and a drag queen by night.
Photo: WILLIAM LAILEY/CATERS NEWS

David's drag wardrobe is so big, that he and his wife have had to rent out a storage unit due to the lack of space on their narrowboat home.

"I have so many clothes, heels, wigs, and quite a bit of makeup, then there's all of the items we need to be able to put a show on; it definitely wouldn't fit inside the boat," he added.

"I just love buying clothes that make me look good, I've bought a few dresses from high street stores, but I mainly get my over-the-top pieces from professional drag stores."

David's favourite pieces in his wardrobe include a studded bikini and a bright red 50s wig with tight curls.

"Wendy loves buying bits and pieces for me too and is always there to help me get ready for an event or to throw some looks together."

Despite his day job and drag act being worlds apart, David has received nothing but support from friends, family and colleagues since starting out as a drag queen two years ago.

"You often hear a lot of horrible stories about nasty things that have happened to drag queens, but I can't say I've ever experienced anything like that.

"I love going out in drag and have noticed that people seem more scared of drag queens and kings then they should be!

"I'm a self-employed joiner, but I work at a company that makes boats, despite the occasional joke from my colleagues, they all love coming to my shows and helping anyway they can."

David and Wendy have started doing workshops with people who are interested in getting into the drag scene.

"Being a drag queen is such a positive experience, and I'd recommend those who want to try it, do! It's so empowering and there's a real magic to it," he says.

Speaking about her husband's drag career, Wendy said: "David's drag wardrobe is probably worth a lot more than mine, but we are both performers so we both have some lovely outfits.

"As his wife, if I did not have 100% trust in him that he was a straight man, I would probably have found it difficult to understand why he wanted to do his own drag act," she says.

"But I'm there for every show and just I love his commitment to his act, and I can see why he loves it so much. He's so approachable and the audience love him.

"I get to share my life with him, and I love being able to source clothes for him, whilst he loves to paint my nails and do my makeup."