How am I supposed to get over him? 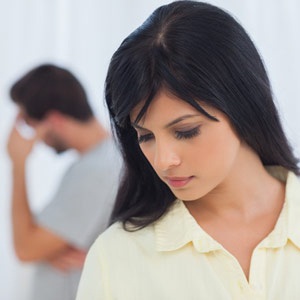 ‘Still sleeping with your 23 year old housemate that moved in while we were still trying to work things out?’ I want to ask. But what I really say is, ‘So how’s work going?’

It’s family dinner night and our son is drawing on one of those large pieces of paper that some restaurants use as tablecloths.

Breaking up is hard to do. But when circumstances dictate that you see you see your ex on a regular basis, the healing process can be particularly lengthy and painful.

When my partner and I split up we agreed on joint physical custody of our son and part of the agreement was that we meet for dinner once a week.

We wanted our son to feel secure that while things had changed, his parents still presented a united front and that we were still a family that cared about each other, only that some of the circumstances were a little different.

So instead of telling my ex to take a flying hike I’ve had to put my big girl panties on when what I really needed was some space.

I would love to say that I have done this with grace and a certain level of decorum but I’m afraid that I’ve been told more times than I care to admit in the last few months that it might be best if I see ‘someone’.

I have been to hell and back several times these past few months but this morning I woke up without that knot of anxiety that has made my body its home since March. I’m still a way from fine but at last I feel that I will be.

So now that I am an expert in heartache and how to get over your ex I wanted to share some of the things that worked for me.

For the first month after I found out that my ex was seeing someone else and that we would not be working things out I did not tell anyone.

I stopped eating and sleeping and I have no idea how I didn’t lose my job but I came very close to having a nervous breakdown until I finally told someone. And then I told someone else. And every time I spoke about it, I felt a little lighter.

It felt a little easier to breathe. The telling was a relief and hearing other people’s perspectives helped me with my perspective.

I found it difficult to talk to my ex at first without breaking down into tears or yelling at him in anger, depending on the day, so I started writing letters. Long letters detailing what I was feeling.

He did not see all of them but we communicated via email about what I had written and so when I did see him face to face I was able to focus a little more on providing a memorable experience for our son rather than assault my ex with my anger and my pain.

Take care of yourself

For the first few weeks I was eating nothing but a banana and a yoghurt a day simply because I knew I had to eat something. Not good. I became so weak that I was unable to get further than the first few 100 meters of the walk up Lion’s Head which is something I used to do with ease at least once a week.

Focus on what is most important to you. In my case it was my son.

Although I love his father very much and although I was drowning in pain I realised that my son, always had and always would be the most important thing in my life. I had to keep it together for him.

Remember that you are not the only person on earth

A few weeks ago I sent my best friend a message in the morning wanting to know why I hadn’t heard from her in a while.

Turned out she had been in a minor accident the previous evening and although not badly hurt I was mortified. I had been wasting so much of my energy obsessing about my break up that I was completely neglecting the people that actually really cared about me.

We are only human beings

Remember that we are all on our own journey in this world. There is nothing you can do about what your ex is feeling. He is on his own path and you need to focus on yours.

Sit with your pain

Try as you might you can not hide from it. It will find you. So sit down with your heartache from time to time and let it wash over you. T

hen take those thoughts and turn them around. Turn them into positive thoughts. The pain will be with you for a long time but it does not own you. And each time you sit with it, it will get easier.

This is how we heal. Slowly. But surely.

The hurt of my break up is not as important to me as the happiness of my son. That is the thought that I sit with now. That is how I’m going to heal. That, and wine.

Follow Women24 on Twitter or like us on Facebook.
We live in a world where facts and fiction get blurred
In times of uncertainty you need journalism you can trust. For only R75 per month, you have access to a world of in-depth analyses, investigative journalism, top opinions and a range of features. Journalism strengthens democracy. Invest in the future today.
Subscribe to News24
Related Links
We all have our relationship crosses to bear
What your ex will teach you one day
Next on W24
'Why I married the 'bratty' guy who was always in detention when we were in school'

Subscribe to newsletters
Voting Booth
Have you ever purchased a fake luxury/designer item?
Please select an option Oops! Something went wrong, please try again later.
Yes, I believed it was authentic
7% - 354 votes
Yes, I didn't want to spend that much money on the original item
20% - 1035 votes
No, I always shop at reputable stores
13% - 683 votes
No, I don't wear designer clothing
60% - 3106 votes
Previous Results
Fashion
Still effortlessly stylish at 100: An ode to fashion icon Iris Apfel whose style...