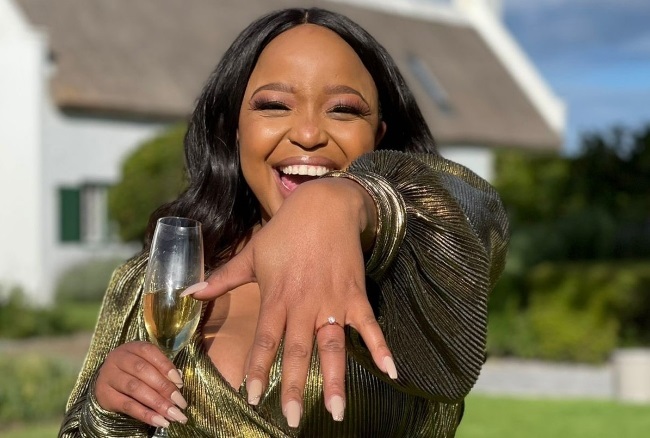 Karabo Ntshweng is engaged to her longtime boyfriend, David Molotlhanyi.

Karabo Ntshweng hopped on a plane to the Western Cape to celebrate her 30th birthday, but when returned home to Johannesburg, she was a newly engaged woman.

The media personality thought she would be having lunch with a view, overlooking the breathtaking landscape; but little did she know that a bouquet of balloons would not be the only thing on her hand by the end of the day. Karabo Ntshweng is engaged to her longtime boyfriend, David Molotlhanyi.

Speaking of how her husband-to-be proposed, she tells W24, "We'd just had lunch and were chilling outside having drinks and enjoying the view, and when I turned around, he was down on one knee. It was totally unexpected. But so magical."

The two are varsity sweethearts and they've been dating for 11 years. And their relationship has always been happy, hence Karabo says she's always known that their relationship would end in marriage but she just didn't know when.

"I was extremely emotional. I’m quite a crier, so look, I balled my eyes out. But really, it was from pure joy. We have been together for a very long time and decided a long ago that we’d spend the rest of our lives together, but nothing prepares you for the shock and excitement of a proposal," says the excited radio host.

It took days for her to take it all in.

After being inundated with congratulatory messages on social media, she tweeted, "For someone who has never thought about how their wedding would be one day, yey, I'm excited."

After the big question was popped, she found out that her siblings and their partners were in on it.

"Everyone knew except me. It was so special to have them there as well. Apparently my twin knew months ago and was in on it," she says.

We live in a world where facts and fiction get blurred
In times of uncertainty you need journalism you can trust. For only R75 per month, you have access to a world of in-depth analyses, investigative journalism, top opinions and a range of features. Journalism strengthens democracy. Invest in the future today.
Subscribe to News24
Next on W24
'I only go on first dates if it's a holiday getaway and I've been on 4 since Covid, here's why'

Subscribe to newsletters
Voting Booth
Have you ever purchased a fake luxury/designer item?
Please select an option Oops! Something went wrong, please try again later.
Yes, I believed it was authentic
7% - 362 votes
Yes, I didn't want to spend that much money on the original item
20% - 1045 votes
No, I always shop at reputable stores
13% - 692 votes
No, I don't wear designer clothing
60% - 3144 votes
Previous Results
Fashion
Zendaya to receive Fashion Icon award - 10 looks that make us nod in agreement