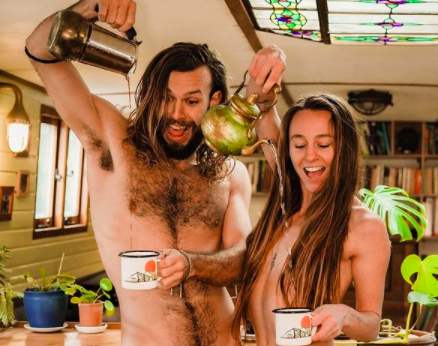 The couple met twelve years ago, and soon after, they discovered naturism, which they say was a coincidence when they went to a spa centre in Belgium. “We went there; it was a great experience. We went there again and again, and several times, we started exploring other options, and that’s how we discovered naturist clubs, naturist campgrounds, activities, events and just rolled more and more into naturism,” the couple told CNN.

Years following their discovery, they started their blog with the intention to debunk some myths surrounding naturism.

“There are two main preconceptions. One is that it’s related to sex. Lots of people don’t understand that people can be naked together without any sexual intention. That’s one big misconception. And the other one is that it’s for old people,” the couple adds.

At the beginning of the pandemic, the couple was stuck in Mexico due to travelling restrictions for three months. “I would say semi-lockdown, but it wasn’t bad. We had a nude beach.”

The couple eventually made it back to Europe and travelled around France as they say, the options are ample in France, and there are many naturist places to visit.

Lins and Nick have scuba-dived sans-clothes in the Island of Utila, had beers in Portugal and hiked nude through the Amazon rainforest. According to Lins, the highlight of their adventure was a stunning beach in Colombia in Tayrona National Park

The couple has turned blogging into their full-time occupation, however, they have been met with some challenges, like some social media platforms not allowing nudity. They then decided to incorporate objects to hide their privates as their original Instagram account was shut down last year.

The pair also said they’re currently working on founding a social media platform for naturists. The pandemic has slowed the couple’s travelling adventures for a while; once it is safe to travel, they plan on visiting naturist friendly locations such as South Africa, Australia and New Zealand.

We live in a world where facts and fiction get blurred
In times of uncertainty you need journalism you can trust. For only R75 per month, you have access to a world of in-depth analyses, investigative journalism, top opinions and a range of features. Journalism strengthens democracy. Invest in the future today.
Subscribe to News24
Related Links
How soon can I start leaving my underwear at my new boyfriend’s place? Here's what women think
The misrepresentation of older women dating younger men: ‘I’m not a cougar, I’m a timeless goddess’
FKA Twigs received 'racist abuse' from fans during Robert Pattinson relationship
Next on W24
From farts to burps, women share awkward moments that ended the honeymoon phase of their relationships