Stuck in a relationship you can’t seem to get out of? There’s a reason for that 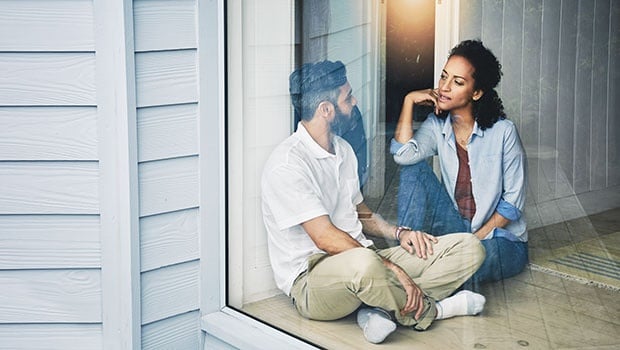 A couple having a serious conversation.

Okay confession time: I was in a relationship for one year longer that it was supposed to last.

Don’t get me wrong – the guy who was my partner at time was perfectly lovely. In fact, he was probably one of the nicest people I’ve had the privilege of dating.

And I’m actually pretty sure he still is, even though I’m no longer talking to him.

In the beginning there were loads of butterflies, interesting dates and shared conversations that at first glance created the impression that we were both compatible.

The honeymoon phase of our partnership pretty much blinded us to the reality that maybe all that we were experiencing was a brief flare up of attraction.

READ MORE:Obsessing over your partner's past is not their issue and may be a form of your own OCD

From there we kind of fell into an accidental relationship.

And it was actually so simple to keep things going as they were because it was easy, we enjoyed each other’s company and we had fun together.

But as time progressed, I found that being in this relationship wasn’t what I wanted. I needed more. I wanted chemistry over comfort. Someone who wasn’t as reserved with his feelings and mostly, someone I didn’t love as nothing more than a brother and friend.

There was nothing wrong with him. We just weren’t all that compatible.

In terms of breakups I hit the jackpot because we split amicably and never once in all this time bad-mouthed each other.

We didn’t realise that we were both feeling the same way, except none of us wanted to hurt each other in the process.

And that’s the thing about feeling stuck in a relationship we no longer want to be in, isn’t it?

We worry that we’ll cause unnecessary hurt and pain in their lives – especially when we consider that they might be far more invested in the relationship than you were.

It turns out that science says this is the exact reason you struggle to get out of relationships you feel you want to move out from and that you’re not as selfish as you think you are when it comes to breaking up with your partner.

According to a new study published on Journal of Personality and Social Psychology, the well-being and concern for your partner is a big reason why you choose to stay in a relationship that doesn’t offer you any emotional or physical joy anymore.

Things like how dependent someone is on getting their emotional happiness and comfort from someone within that partnership is key – and according to Stylist.co.uk, one of the lead researchers in the study, Samantha Joel, says that it’s harder for people to leave when they “perceive their partner as being reliant on them.”

A relationship is a two-way street, but it’s also one that creates and inflates our sense of obligation towards one another.

When I think of my own reasoning behind why I stayed so long in my own relationship, I realise now that it was easier to be uncomfortable in my own unhappiness than it was for me to simply afford my then partner the honesty we both deserved.

Samantha adds that in doing this, we can sometimes overestimate the way our partner perceives the relationship which could mean that both of you may have been waiting for the other to initiate the break up to a) either avoid hurting the other or b) you wanted to avoid being the one doing the dirty work.

But either way, the fact that you put your happiness aside because you’re worry about your partner’s needs speaks of empathy and care – both great qualities that are even more enhanced when in a relationship that actually makes you both happy.

We live in a world where facts and fiction get blurred
In times of uncertainty you need journalism you can trust. For 14 free days, you can have access to a world of in-depth analyses, investigative journalism, top opinions and a range of features. Journalism strengthens democracy. Invest in the future today. Thereafter you will be billed R75 per month. You can cancel anytime and if you cancel within 14 days you won't be billed.
Subscribe to News24
Related Links
The I vs we debate: A new study reveals that couples who refer to themselves as a joint party are...
Why on and off relationships are bad for you
Could you be (s)mothering your partner?
Next on W24
'I left my husband of 18 years. I felt unloved': Why some marriages can't be saved while others can