Kegels, mirrors and sex toys: How I learned to have my first orgasm at 31 "I've never had an orgasm."

It came up more or less as a joke while talking with a friend recently. In fact, at the age of 31 I had pretty much given up on the idea of ever having an orgasm. I just figured I'm one of those people who can't enjoy sex.

It isn't like I haven't tried. Over the years I've purchased a few sex toys in the hope that something magical would happen. It didn't.

I've had sex too, although not a lot lately. When we first got together, my husband and I had sex almost daily. Now - four years and one child later - it's more like every six months.

It isn't fun for me and, as a result, isn't exactly exciting for my husband either.

The thing is, it isn't like I don't have a sex drive. All I have to do is watch an episode of "Black Sails" and catch a glimpse of a topless Charles Vane and I'm raring to go. But when things get started, nothing happens down there.

Fortunately for me, though, when I casually mentioned my inability to orgasm, it was to the co-founder at Kinkly.com.

She put me in touch with Ducky Doolittle, the resident sex educator at Sola.

Her goal: To send me off on a "find my orgasm" journey. I was hand-delivered the Sola Passion Set and was given a set of assignments. It was sort of like sex homework. I dug in and got started.

...traveling to O-town requires a few key steps: strengthening your pelvic floor (or Kegel muscles), getting to know your body and then getting down with a good sex toy...

"'I've never had an orgasm' is the No.1 question I get from female participants in my workshops. It's also common for women to have had one, but not understand what an orgasm feels like," Ducky told me via email.

"I teach people what an orgasm is. Then I teach them how to have bigger, more bad-ass orgasms."

According to Ducky, traveling to O-town requires a few key steps: strengthening your pelvic floor (or Kegel muscles), getting to know your body and then getting down with a good sex toy (in this case, the Sola Massager).

Oh, and the final thing? Don't focus on the orgasm. That can create pressure. The goal here was simply to learn about my body and what feels good.

"What an orgasm is - for a person of any gender - is a series of involuntary contractions. If you've ever felt fluttering - in your muscles, in your pelvis - it can be really light, but that is an orgasm.

Flexing my muscles felt totally foreign to me. I gave it half a dozen tries over a few days, each time with less and less faith that it would work.

The stronger your muscles are and the more blood you can pull into your pelvis, the bigger and more pleasurable your orgasm will be," Ducky said.

According to Ducky, strengthening those Kegel muscles is super important - kind of like physical therapy for your privates.

I was to do these exercises consistently three to four times per week but also incorporate that "clenching" into my sexy time as I explored my body.

I spent some time going over the assignment and applying it to my situation. At first I felt totally embarrassed, almost shy, “exploring” my body even though I was the only person in the room – and the whole house!

Flexing my muscles felt totally foreign to me. I gave it half a dozen tries over a few days, each time with less and less faith that it would work.

Ducky also recommended that I get acquainted with my body by using a mirror to look at myself. That included finding and exploring the outer lips, inner lips, clitoral shaft, clitoral hood and clitoris.

"The clitoris is the center of the frickin' universe," Ducky said. "Most people will be able to drive an orgasm through their clitoris."

Ducky recommended the Sola Egg Massager for my self-exploration and told me to choose either the Bunni Sleeve or the Omni sleeve, depending on what appealed to me and felt good. I chose the Bunni head. It looked nothing like any sex toy I'd seen before. Why not? 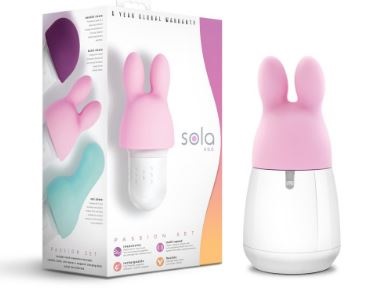 Ducky recommended that I charge my massager fully, practice turning it on and off so I was familiar with how it worked, and that I watch a video on how to use it.

Next, I was to take a shower or bath, lie back on the bed and begin exploring my body with the Sola Egg's vibrations, letting my body tell me where to go with it. I had played around with this for a few days with no major results.

But then, one day, something DID happen. As I held the Sola massager against my clitoris, I started to get the strangest sensation. The soles of my feet started to feel hot.

I was totally confused. "How the heck am I feeling something there, but not here, where I am actually applying the toy?" I thought.

The sensation of heat in my feet began to grow and spread. My toes began to curl.

Something was starting to feel amazing and this time, it was moving to the right area. I wanted to move into the feeling, so I pressed the Sola massager more deeply into my body.

The sensation continued to build for a few moments, feeling better and better. Then, a miracle occurred: I experienced my very first clitoral orgasm.

The depth of the vibration increased. (The toy is pressure sensitive; the more pressure you apply to it, the deeper the vibration.)

Wow. Suddenly, I was arching my back and clenching my thighs and calves. I was feeling something building inside!

Read more: Would you use gene editing to improve your sex life?

Then, one of the Bunni "ears" slipped inside me and applied pressure to, what I assume, was my G-spot, while the other continued to massage my clitoris.

The sensation continued to build for a few moments, feeling better and better. Then, a miracle occurred: I experienced my very first clitoral orgasm.

It lasted for a mere exhale, but those few seconds completely restored my faith in my sexuality.

Achieving my first orgasm wasn't easy. It took almost 10 hours of reading, practice and other homework that Ducky provided. That first orgasm also left me with very sore butt cheeks!

But I'm still "practicing," exploring my body and waiting for my next assignment on my orgasm journey. After 31 years, I now know what an orgasm feels like (um, amazing!) and that it's possible for me. So, what's next?

This article was originally published on Kinkly.

We live in a world where facts and fiction get blurred
In times of uncertainty you need journalism you can trust. For 14 free days, you can have access to a world of in-depth analyses, investigative journalism, top opinions and a range of features. Journalism strengthens democracy. Invest in the future today. Thereafter you will be billed R75 per month. You can cancel anytime and if you cancel within 14 days you won't be billed.
Subscribe to News24
Related Links
No sex. Is it celibacy or something else?
Does the rise in sexually-transmitted infections have anything to with dating apps?
Less than half of SA women are happy with their sex lives
Next on W24
Labiaplasty is about more than getting a 'designer vagina': A surgeon explains why women get this op