A soccer star, an English bulldog and a blushing bride: Inside Kaylyn and Wayde Jooste's wedding Kaylyn Lawrence and her soccer star beau Wayde Jooste recently got married in a beautiful intimate ceremony attended by their loved ones and English bulldog, TD. Image supplied by the couple

Kaylyn Lawrence and her soccer star beau, Wayde Jooste, have been together for almost four years, and their love has unfolded like the stuff of novels.

They met through a mutual friend in Durban when the new groom was playing for Golden Arrows. It would seem the former Orlando Pirates defender is skilled on and off the field as he first asked his then-would-be wife to be his best friend before taking their relationship to the next level.

This gave them time to get to know each other until Kaylyn moved to Joburg, where he was based during his time with the Buccaneers.

"Things worked out for us when I got a job in Joburg and had to move closer to him," the new bride shares.

READ MORE | The secret to making a marriage last? A couple celebrating 80 years together say it's these 4 things Kaylyn Lawrence and Wayde Jooste fell in love almost four years ago and have recently made their commitment permanent by getting married in a stunning intimate ceremony. All images supplied by the couple.

When it came to their engagement, Wayde kept his cards close to his chest and planned a surprise proposal with the help of their friends. Kaylyn never saw it coming even though she was confident their relationship would eventually lead to the altar.

She says of the engagement: "I knew it would come, but I didn't expect it, so I was thrilled when it happened because I always wanted it to be a surprise when he proposed."

The couple was on holiday at Parys Golf Estate with friends as it was off-season for the football maestro.

Kaylyn had been planning to have a couple of pictures taken during the holiday as they had few throughout their time of almost two years together. This was when she was given rose petals to throw in the air, supposedly for their photos to be taken.

"But when I turned around, he was on one knee, and I just thought, 'Oh my gosh'," Kaylyn says, remembering one of the best days of her life. READ MORE | Groom runs off and leaves bride stranded at wedding, but she keeps the party going

She had expected him to wait for a moment where they would be together with their families, particularly hers, before popping the question as she'd always told him how important it was to her that he gets her parents' blessing before proposing. "After the engagement, I called my parents, and they were so excited because they knew it was going to happen. Wayde later showed me a screen recording of when he video called them and asked for their blessings." Kaylyn says she was in planning mode from then on but wanted to have enough time for the process.

"If it were according to Wayde, we would have gotten married sooner, but I took time to plan as I wanted it to be perfect," she says. "I also had a lot of support from families such as my mom and aunties. His mom also did the décor for us. Everyone helped, including my maid of honour and bridesmaids." READ MORE | 'Marriage is irrelevant,' they said. But therapist begs to differ, saying not all marriages are toxic She had three bridal showers as their loved ones are in different parts of the country.

The couple chose Rosemary Hill in Pretoria as their venue. Kaylyn was excited to include their loved English bulldog, TD (Tiny Dog), as the ring bearer at the ceremony. 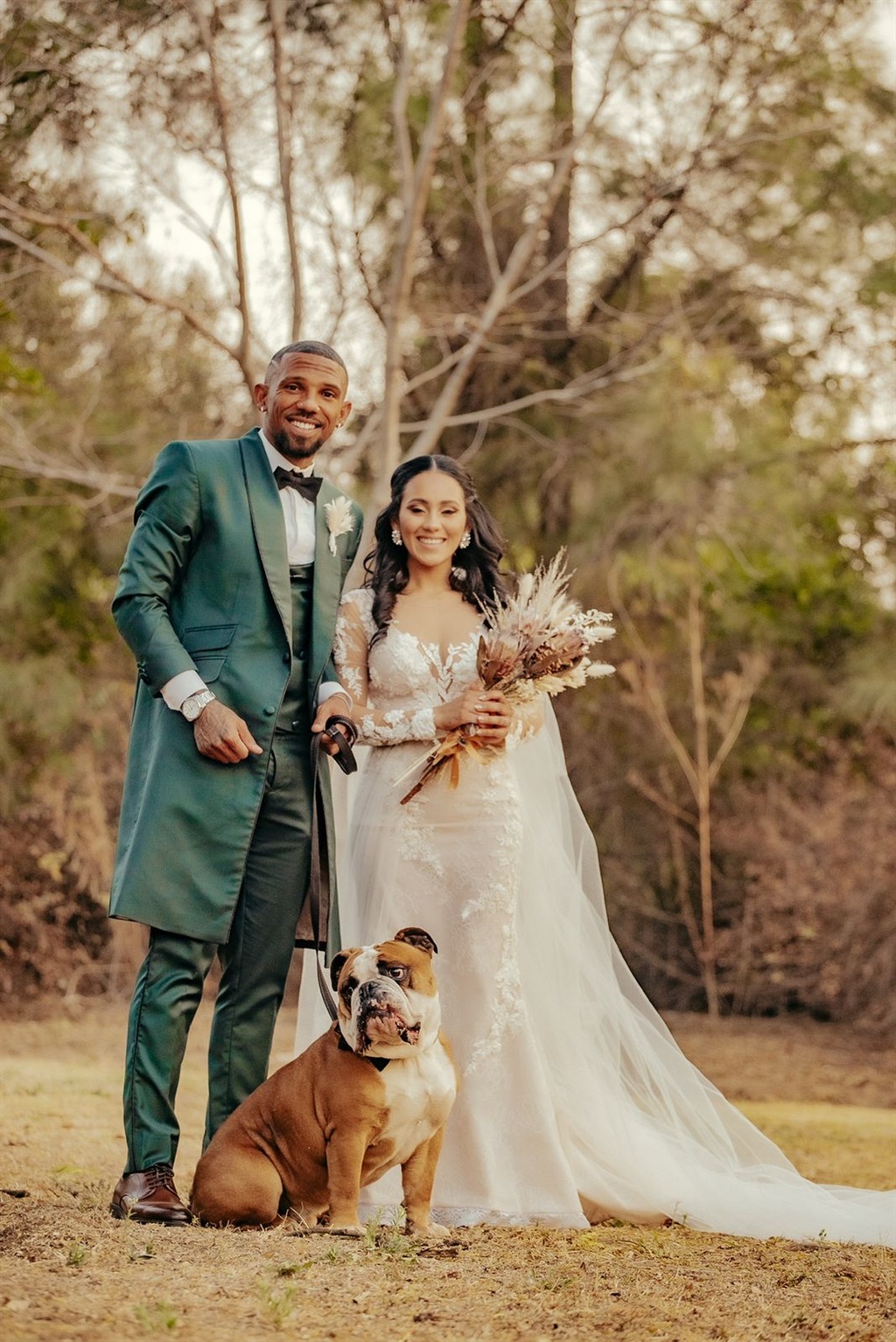 On the day, the groom wore two custom suits by renowned creative director and founder of Palse Africa, Paledi Segapo.

The bride had not seen the suits until the wedding day and only knew the colours as she needed to ensure they would match everything else on the day.

But she was thoroughly impressed with her groom and their designer's taste.

"We usually have a bride with two dresses, but this was the first time I knew of a groom with two suits while I had one dress," she laughs, adding she wouldn't have it any other way as she was absolutely in love with her imported dress. "The dress fit perfectly, and it was how I envisioned it," the new bride says. They had around 70 or 80 guests comprising those close to them.

"It was an intimate wedding, and there were so many tears. It was just such a heartfelt ceremony. The first dance with our parents was my most memorable part of our wedding. I wish I could have frozen the entire day in time."

We live in a world where facts and fiction get blurred
In times of uncertainty you need journalism you can trust. For 14 free days, you can have access to a world of in-depth analyses, investigative journalism, top opinions and a range of features. Journalism strengthens democracy. Invest in the future today. Thereafter you will be billed R75 per month. You can cancel anytime and if you cancel within 14 days you won't be billed.
Subscribe to News24
Next on Life
Here comes the bride… down the condiment aisle? Couple marries at supermarket where they first met