When we think about elopements, we often think about a couple running away to wed in secret without the consent of their parents - because that's what the term used to mean; it was one that often hid a forbidden love.

But for 5FM presenter Stephanie B, it was about sharing a special moment with her now husband and finding a way to do so that would be cost-effective and make logistical sense.

"I think the time of putting yourself in debt to have a wedding has passed," Stephanie tells me as we chat on the phone after her radio show.

She explains that there were two main reasons she and her partner decided to elope: "The first reason being that my partner is not South African, and he moved to South Africa for a job quite a number of years ago. So when engagement talk came up, and we spoke about a wedding one day, we both said it would always be very difficult logistically because if we have the wedding in South Africa, then his family in England and his friends in England might feel left out or that we were excluding them on purpose. And then a lot of them wouldn't be able to afford to come to South Africa to attend the wedding. The second reason was one that delayed many couples' weddings -- the Covid-19 pandemic. Stephanie got engaged just months before lockdown was initiated. The pandemic forced the couple to put their nuptials on hold, and when they were finally able to tie the knot, things like overpriced venues and backlogs made their decision to elope a little easier.

Stephanie and her partner ruled out South Africa and the UK as a destination for their wedding, opting for a third, neutral country instead -- America.

She explains her thinking behind this, saying: "There's not going to be a way that we can do this that doesn't hurt people or exclude some people, so the easiest is just include our parents, do a micro wedding/elopement and do it in a third country that's neutral.

"That way, no one can really be upset that they weren't invited or it was an inconvenient place because no one was actually invited. At all. No one even knew about it; it was a secret."

So the pair headed to Sedona, Arizona, USA, along with their parents. Stephanie's father officiated the wedding, which took place at the foot of a mountain, and then accompanied the newlyweds on a hike up the mountain for their photographs.

"I do think that that feeling towards elopement is changing. Especially when I started doing my research, I noticed how many people are actually doing elopements now and how common it's becoming," says Stephanie. "There's photographers and wedding planners that only specialise in elopements now, especially in the US and Europe."

READ MORE | How much are people actually spending on wedding gifts? Your wedding etiquette questions answered 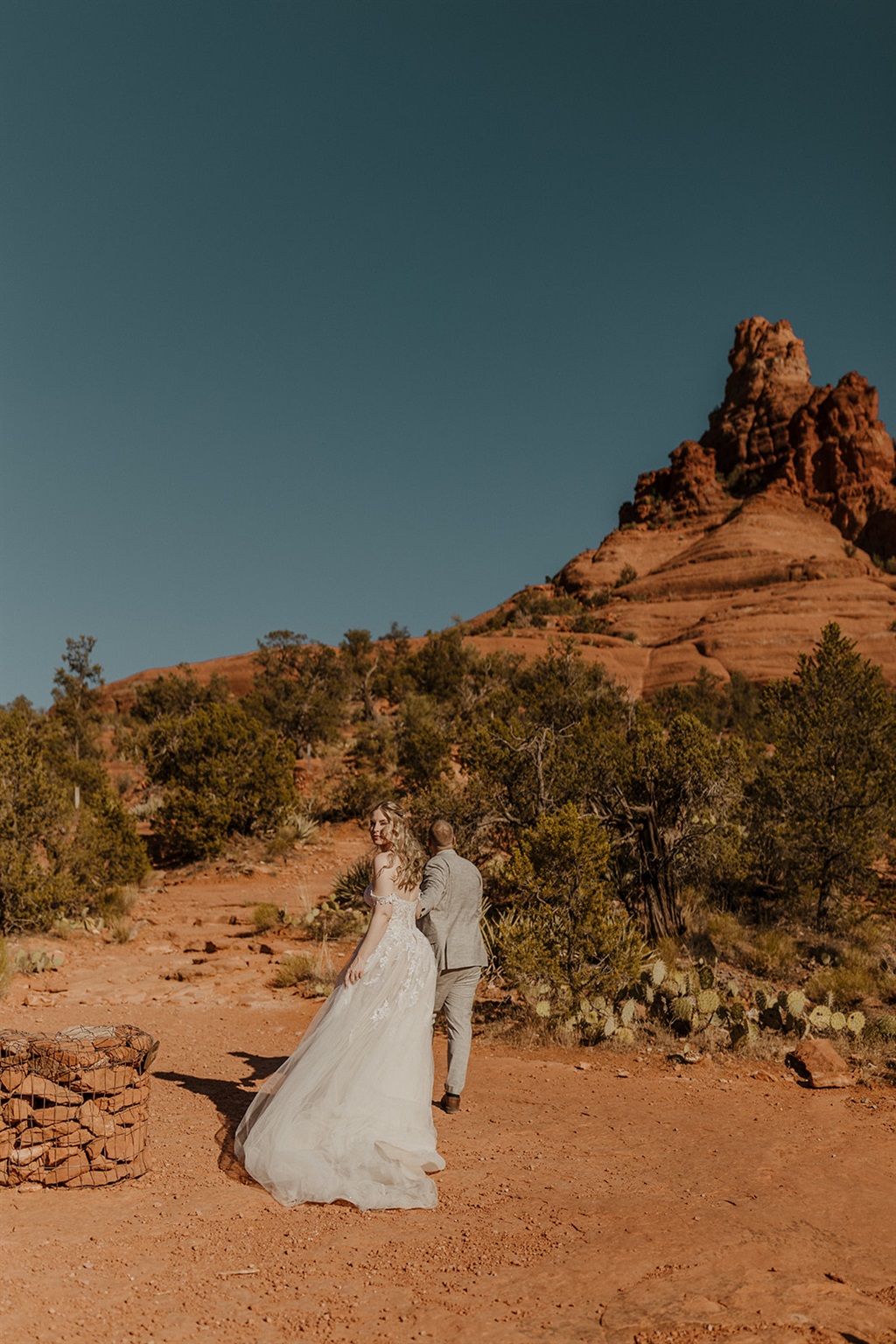 About whether anyone in her family felt slighted by their decision, she says: "No one in my family necessarily said anything to me, but there was obviously like a vibe. I have a very big family, so there might have been a few hurt feelings, but no one said anything to me."

At the end of the day, Stephanie says everyone understood that the point of eloping was not to exclude anyone but rather to do what was best for them as a couple.

"We didn't elope because we were trying to run away. We eloped because it was cheaper. We didn't want to start our marriage off on a financial back foot -- we want to buy properties together someday and trying to save up enough money for a deposit, and that's more important to us than one day of alcohol, drinking and eating and huge venue hire.

"Some venues quoted rental prices of over R100 000. I was like, how is that just venue? That's not even the food and alcohol and the rental of the knives and forks and the plates and the chairs, and the decorations and the flowers, and the dress, you've got bridesmaids [too], and oh my goodness, yeah, it was a lot."

While she's happy with her decision, Stephanie admits there are some things about a traditional wedding ceremony that she missed.

"I would have loved to have my closest girlfriends with me. I did miss them, and their presence on the day was definitely missed, not going to lie. I also missed the opportunity to stand up in front of all our friends and family and think about why I'm choosing this man as my husband and sort of doing that huge declaration of love in front of people." If you're planning to elope, but don't know where to get started, Stephanie has some top tips to share.

"The first important lesson that I learned is pictures are forever, so we really wanted to get a good photographer and videographer. We knew we were going to be excluding so many people, so we wanted to give people a video and photos afterwards to be able to see at least and feel like they were there just a little bit."

"If you want to elope in any country, don't look for a traditional wedding photographer," says Stephanie. She suggests searching the keywords "elopement photographer" or "adventure photographer" along with the name of the country or city you're getting married in.

"Those are the keywords that you want to use because there are photographers that specialise in elopement.

"They have done this so many times that they will tell you what they think is best for the running order for the day."

2. Buy everything you need in your home country

"I bought my wedding dress in South Africa. He [her partner] bought his suit in England. We got as many of the small things we needed in our own countries before we got on the plane to get married. So I would recommend arriving in the country with everything you need because you can't always guarantee that you're going to find exactly what you want in the country that you're going to."

3. Do your research on marriage laws

"Make sure the country you're eloping in allows South Africans or foreigners to get married there."

Do your research on where and how to get your marriage license in the country you plan on getting married in, and make sure that the wedding will be legal in your home country, too, when you return.