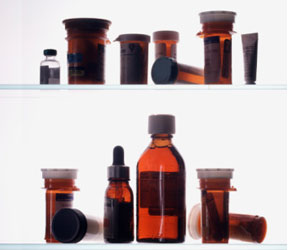 Are women less likely to get sick because they have more stored fat than men?
There is no link here with the immune system. No one has investigated fat percentage against illness rate and there is no research showing that women get less sick than men do. They may just complain less when they are ill!

Are women generally more health conscious than men when it comes to taking vitamin supplements?
It tends to be the women who pick the vitamins up off the supermarket shelves, for themselves and their partners. Women are probably more aware of health issues and vitamin supplements.

As a huge generalisation, exercising males may be more interested in performance-enhancing supplements rather than health related ones.

But it has been shown that women on the contraceptive pill are less likely to get run over! This is because of the need to have to remember something daily. Apparently it shows that if a woman is responsible enough to remember to take the pill then she is more likely to lead a responsible life (and look both ways before crossing).

Are vitamins that are specifically marked for women necessarily better for women, or is it just an advertising ploy?
Women do have different needs than men so I do think there is a place for women's own vitamins. Women tend to need a higher iron intake due to menstruation, and calcium to offset osteoporosis.

However, men should also be aware of osteoporosis as bone demineralisation starts from 25 onwards for both sexes. If women are taking more calcium, they also need to take more vitamin D and phosphorus as it aids the absorption of calcium.

In general, I think a balanced diet for all is the best answer, but people do have different needs and there is a difference between the vitamin and nutritional needs of men and women. Athletes also need extra vitamins and mineral supplementation.

For example, they need antioxidants, as exercise produces more free radicals that need to be mopped up before they do cell damage. They also need more zinc, as there is a greater protein turn over in athletes and their diet is often low in zinc due to it being high in carbohydrate.

However, there are a lot of different supplements on the market and a good quality vitamin and mineral supplement is a good insurance against becoming deficient in anything.

Are women deficient in some things that men are not?
Some women can develop anaemia (low iron) due to menstruation. Women are also recommended to take extra calcium against osteoporosis and bone demineralisation, as their calcium can get low due to dieting and having a low intake of dairy products. Vitamin B6 can help with PMS.

In winter flu is a major problem for anyone who exercises. There are so many remedies around, but what is the best recipe?
I would advise people not to have a flu jab when training very hard. But if they do, it's best to take a few days out and wait until the mild symptoms that some people experience following a flu jab have gone.

One of the causes for chronic fatigue developing in some athletes is that they train with an infection or do not allow enough recovery time after an infection. Flu viruses are the worst for causing post-viral fatigue, which can last from weeks to months.

As a general rule, don't train on the day of your flu jab and don't train for three days after. It is best to have a jab in your off-season, if possible, to avoid any complications.

A high carbohydrate diet, or carbohydrate drinks during and following exercise can stop the rise in the immunosuppressive hormone (cortisol) that is released during long, steady exercise. This may reduce risk of coughs and colds.

Glutamine supplementation following exercise will prevent the fall in glutamine (an amino acid) that occurs during and after long duration exercise. Glutamine is essential for the optimal functioning of some of the white blood cells.

Also, plasma glutamine concentrations in the blood can get low in over-trained individuals, and one of the signs of over-training is an increase in susceptibility to infection.

We live in a world where facts and fiction get blurred
In times of uncertainty you need journalism you can trust. For only R75 per month, you have access to a world of in-depth analyses, investigative journalism, top opinions and a range of features. Journalism strengthens democracy. Invest in the future today.
Subscribe to News24
Related Links
Healing from within
Sick myths
Fast-track winter remedies
Next on W24
Can food help you get rid of PMS and the discomfort of a period?