Woman who lost leg to cancer forges ahead to become a nurse, complete UK master's degree In November 2013, three months after she started feeling pain just below her left knee and had a swelling/lump, Chaikhwa Nani Lobatse consulted the doctor and was diagnosed with osteosarcoma (bone cancer).

"I was in disbelief. My symptoms matched that of bone cancer, and that’s what the doctor suspected after doing the biopsy, so I was expecting it, but it was just hard to believe," she tells W24.

"I think that was the saddest day of my life. I just had a lot of fear, especially the outcome, because I didn’t understand much about this type of cancer and cancer in general."

Chaikhwa explains that she faced a lot of challenges, but decided to push herself and give herself a fighting chance. She also mentions that she had a great support system. READ MORE | 'I made it, I'm an inspiration' - 22-year-old cancer survivor and amputee embraces life fully

"It wasn’t smooth, but wasn’t the hardest either. I had a strong support system, so it made me feel better, that feeling of not fighting alone," she says, adding that she finally decided on the amputation as the pain became worse.

"The surgeon planned above-knee amputation, but I was not ready. I couldn’t think of a life without a leg, but after some time, I decided to amputate because the lump was getting bigger and the pain getting worse. I took six cycles of chemotherapy; the side-effects of chemotherapy made the journey very hard."

After five years of having clear scans, she started feeling confident that she had survived. 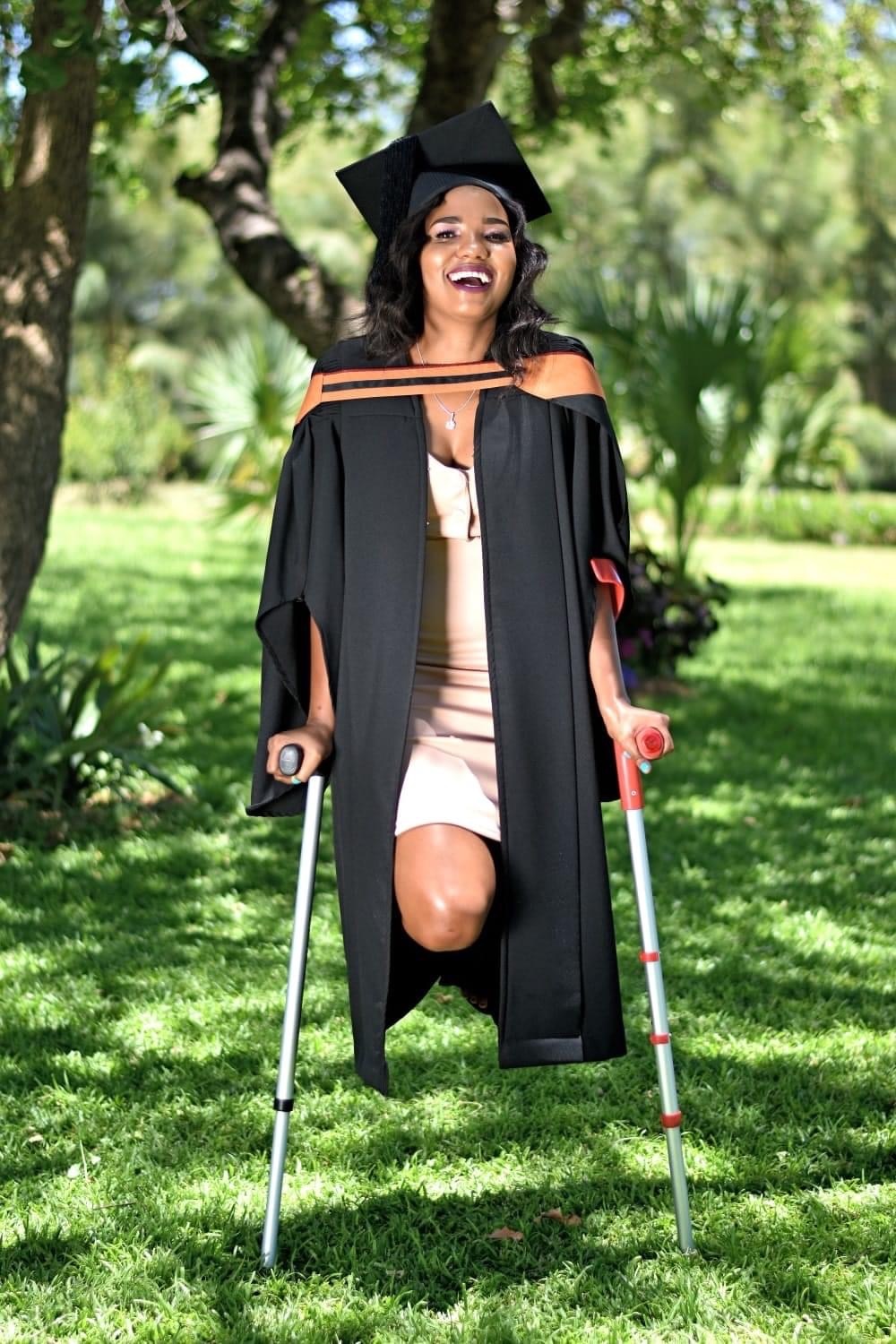 "I’m still following up with the oncologist. They normally do some investigations such as chest X-ray annually to check if there is no disease," she adds.

Despite everything, the registered nurse was still able to pursue her dreams. After completing her Higher Diploma in General Nursing at Francistown Institute of Health Sciences, she graduated from the University of South Africa (2017-2019) with a BA in Nursing Science.

In 2021, through the Chevening Scholarship, she went to the United Kingdom to study a Master of Science in Clinical Oncology at the University of Birmingham, and she is graduating this December (2022).

She says that she became an oncology nurse in order to walk with patients throughout their journey.

READ MORE | Started her period at 7, diagnosed with endometriosis at 12 - woman reveals her health battle

"I always wanted to do trauma nursing, but I couldn’t do it anymore. I’m glad I developed a passion for working with cancer patients. I was misdiagnosed several times, and I believe it was because of inadequate knowledge about osteosarcoma by the clinicians. I then decided to be one of the people who will close this gap by raising awareness on cancer and providing support for cancer patients," she says. "Knowledge is power, and with adequate knowledge, one can make informed decisions about one’s health or a patient. In 2014, I requested to be transferred to an oncology department, and we formed a cancer support group to raise awareness on cancer. We also provided emotional support to cancer patients and their caregivers," she shares.

"Acceptance is not easy, but again, it is not impossible. There is more to fighting than giving up because the results of giving up are obvious. We all didn’t know how it would end, but hope kept us going."

Lobatse advises patients to know that they are not fighting alone, saying: "Talk to someone who can motivate you or find a support group. Most of the side effects of cancer treatment are temporary, so keep pushing until the end."

We live in a world where facts and fiction get blurred
In times of uncertainty you need journalism you can trust. For 14 free days, you can have access to a world of in-depth analyses, investigative journalism, top opinions and a range of features. Journalism strengthens democracy. Invest in the future today. Thereafter you will be billed R75 per month. You can cancel anytime and if you cancel within 14 days you won't be billed.
Subscribe to News24
Next on W24
Collagen supplements for skin - hoax or worth the hype?